‘One way or another, we are in for big changes'

It’s the job of teenagers to set some distance between themselves and their families, whether their parents are staid, respectable pillars of the community or social radicals. Naomi Klein, born in 1970 to the latter sort of family—she’s the daughter of documentary filmmaker Bonnie Sherr Klein (best known for the 1981 anti-pornography movie Not a Love Story) and physician Michael Klein, Vietnam War resisters who had moved from the U.S. to Montreal—was no different. “It was pretty mild,” recalls Naomi, “more an aesthetic rebellion than anything, just a teen girl vaguely embarrassed by her very political family.”

Nor did it last long. Two events rapidly changed Naomi’s course: her mother’s severe stroke in 1987, which “brought us together as a family,” and the Montreal Massacre. Naomi was a 19-year-old university student in Toronto when Marc Lépine murdered 14 women at the École Polytechnique in her hometown. Personally moved and politically outraged at the tendency of governments and media to view the crime as the isolated act of a madman, rather than as part of a broader pathology of violence against women, Naomi threw herself into journalism and social activism on numerous fronts.

FROM THE ARCHIVES: Maclean’s exhaustively retells the story of the Montreal massacre (1989)

By the time she was 30, she had written No Logo (2000), an assault on brand-fixated consumerism and the globalized capitalism that fosters it. Naomi followed that up with The Shock Doctrine in 2007, arguing that socio-economic policies beneficial to corporations and harmful to the poor are now routinely rushed into place in the wake of disasters, natural or man-made, while societies are in a state of “shock.” Bestselling and award-winning, translated into dozens of languages, Klein’s books have made her one of the most prominent figures of the contemporary left and a fixture on lists of the world’s most influential thinkers.

For all her widespread interests, though, Naomi for years avoided any focus on the slowly unfolding disaster of climate change. “I did write about it,” she says, “but not in detail. I had the relationship to the subject that most people had—just tune it out as something hopeless.” It was only when she understood that “resistance to climate change would weave together everything I cared about and advocated for, that I stopped turning away.” It became her next project. The crisis aspect of climate change became arrestingly visible during Naomi’s early research, especially during a visit to Bolivia’s derelict Chacaltaya ski resort. Perched on an 18,000-year-old glacier, Chacaltaya was the world’s highest resort until half a century of accelerating melting saw the glacier completely vanish by 2009. 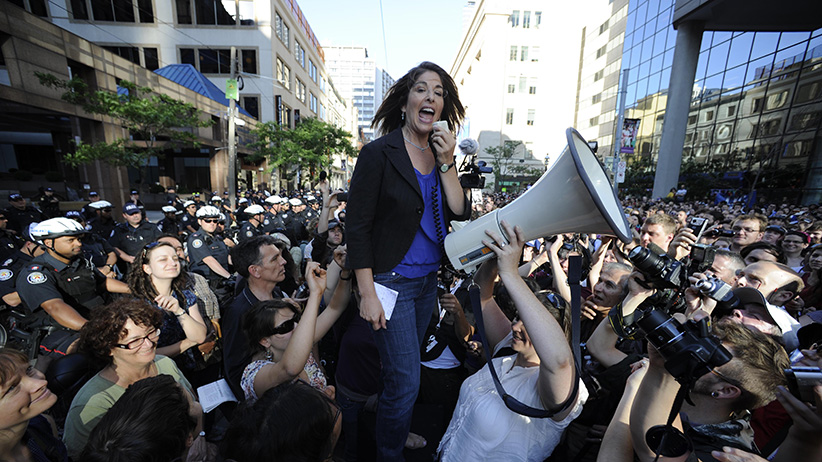 Klein at a rally during the 2010 G20 Summit in Toronto. (Lucas Oleniuk/Toronto Star/Getty Images)

But the opportunity for change she saw is the same one inherent in any large-scale crisis, and is neatly captured by the resonant title of the book Naomi released in 2014: This Changes Everything: Capitalism vs. the Climate. It’s as much of an opportunity, she allows, for the shock doctrine to go into hyperdrive, and for what she sees as the forces of economic inequality to grow stronger—“We have always responded to disaster by consolidating power and influence”—as it is for socio-economic justice to prevail. “One way or another,” Naomi says, “we are in for big changes.” Even though she describes herself as more of a “possibilist” than an optimist, Naomi is hopeful “because I’ve seen a huge shift in the level of engagement in the issue.”

Some of that engagement has come from unexpected places. Naomi, a non-Catholic, was invited to the Vatican to take part in a July 2015 press conference held to discuss Pope Francis’s sweeping climate-change encyclical, Laudato Si. At the same time, though, natural allies have turned cool. The Leap Manifesto—crafted by Naomi, her husband Avi Lewis and other prominent activists, which calls for a radical restructuring of Canada’s entire political and economic systems to deal with the climate crisis—proved highly divisive at April’s NDP convention. One step forward, one step back: for Naomi Klein, it’s still an era for possibilists, not optimists. — Brian Bethune