The Indian prime minister's long overdue visit was a success—and it was good for Harper, too. Next stop: Toronto. 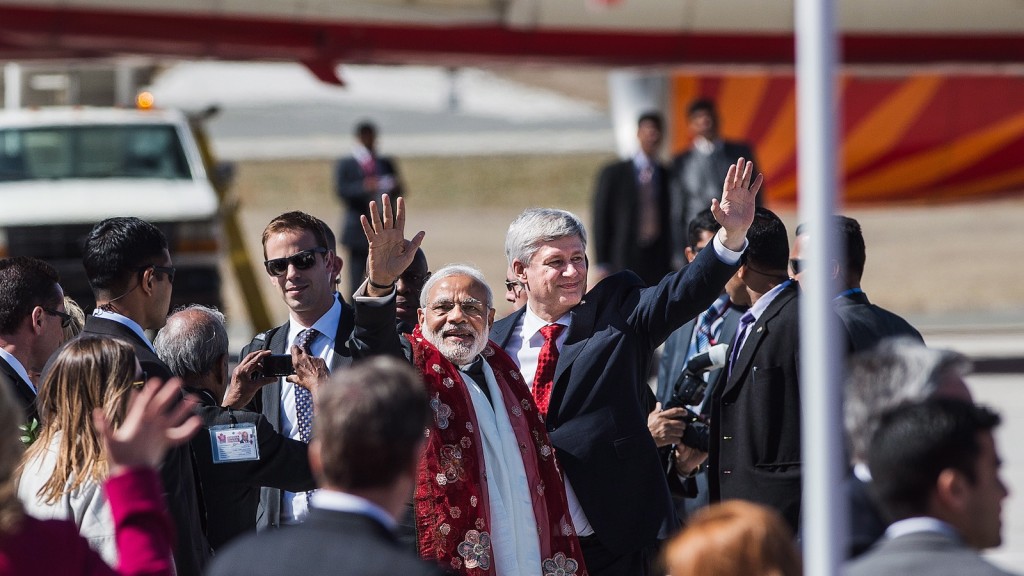 Indian Prime Minister Narendra Modi’s visit to Canada has so far yielded an armful of promises and one genuine prize. The prize is a multi-million-dollar deal that will see Cameco, a Saskatchewan-based company, provide India with uranium to supply its nuclear power facilities.

This is significant because it was Canadian technology, decades ago, that allowed India to build a nuclear bomb. Relations chilled as a result. Then, in 2013, Canada signed a deal that again allowed the export of nuclear materials, something Prime Minister Harper today said “allowed us to turn the page on what had been in our judgment an unnecessarily frosty relationship for far too long.”

The promises came in the form of a stack of binders that were ceremoniously exchanged in the domed Rotunda of Parliament’s Centre Block. These were mostly described as “memoranda of understanding” on topics such as aviation and railways. What if anything will come of them is unclear.

Modi also pledged to liberalize visa requirements, something that will likely have more of an impact when it comes to growing and expanding person-to-person ties between the two countries. These are already extensive, with more than one million Canadians claiming Indian heritage.

Related: Can Modi make a miracle out of India’s economy?

The big prize, a free trade deal, remains elusive. Canada and India have been negotiating toward one since 2010. Today, Modi said India and Canada will “implement the road map” to conclude negotiations by September 2015. This is roughly the diplomatic equivalent of the “promise ring” a high school senior gives his girlfriend before she heads off to university, from where she will dump him at Thanksgiving. It looks and sounds nice, but doesn’t really mean anything.

Still, the visit has so far been a modest success. Sikh activists on social media had promised a “freedom rally” on Parliament Hill to greet the man they describe as a butcher—in part because of his history as chief minister of Gujarat during a massacre of mostly Muslims and a smaller number of Hindus there in 2002. There was no rally. As is customary, security personnel lurked around corners and behind buildings where they couldn’t easily be noticed. By mid-morning, when it was clear they wouldn’t have much to do, police were crowding a trendy coffee shop on Ottawa’s main pedestrian drag. They may be busier in Toronto and Vancouver.

The visit was also long overdue. Canada and India are fellow democracies and members of the Commonwealth. They are both multi-ethnic and multi-confessional societies, though Canadian pluralism is a more successful project than India’s. Hundreds of thousands of Canadians were born in India. It is logical that commercial ties deepen. It now seems odd that Canada hosted then-Pakistani president Pervez Musharraf in 2003 when no Indian leader had come since the ’70s.

Finally, Modi’s arrival likely benefits Harper. He gets to look statesmanlike hosting the leader of a rising power. And beside the dour Modi, he appears almost cheerful.

Harper has perfected the art of responding to prickly questions from the media — today, it was the CBC’s Terry Milewski asking why anyone should believe his pledges about increased trade — with the same forced smile and flat tone. He may loathe reporters, but he hides it well.

The Canadian Prime Minister tried to portray himself and his guest as political soul mates. He quoted Modi’s motto of “minimum government and maximum governance” and probably wished he had thought of it himself. Modi for his part praised what he described as Harper’s vision. There is the potential for a genuine partnership between the two. But with Harper facing an election in six months, it is far from assured.