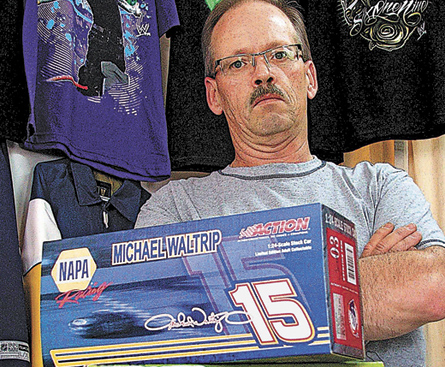 In 2001, Randy Nicholson, a former motel handyman in Woodstock, N.B., and a devoted racing fan, opened a NASCAR memorabilia shop. He eventually decided to call it Boogity Sportswear after the phrase, “Boogity, boogity, boogity, let’s go racin’, boys,” coined by former American NASCAR champion and TV commentator Darrell Waltrip. For years the store did well; but not long ago, Nicholson received a legal document entitled, of all things, “Darrell Lee Waltrip vs. Randy C. Nicholson.” It was, he says, the opening jab in a highly uneven boxing match. “He had gloves,” Nicholson says, a little ruefully. “I didn’t.”

Sent by an Ottawa law firm representing Waltrip, the letter said Nicholson had infringed upon the race-car driver’s registered Canadian trademark—“boogity”—and gave him until Sept. 8 to scrub all mention of the word from his operations. Waltrip’s lawyer, Scott Miller of MBM Intellectual Property Law, describes the basic premise of Waltrip’s complaint as, “Hey listen, the only reason this guy even started his store in association with ‘boogity’ is because of me.”

Nicholson, known locally as “Mr. Boogity,” was “a little upset” when told it could cost a minimum $150,000 to fight (complying with the letter has already lost him $8,000). Instead, he mounted a media campaign, calling his local radio station and then uttering a few intemperate words about Waltrip to a reporter: “The one comment I wish I had back was when I said, ‘If I had him in front of me I’d cut his windpipe off.’ I regret that.”

Yet the irony of Waltrip, a blue-collar icon, using his deep pockets against a rural store owner isn’t lost on Nicholson. “Without the country folk, NASCAR wouldn’t be where it is today,” he says. “You don’t see the three-piece-suit-and-tie guy at the race. It’s the blue-collar guy.” Ditto with “boogity,” he says: “It’s not in the dictionary. I don’t even know if it’s a word. I call it a redneck word.” Were Nicholson to fight, however, Waltrip “would get his wish. Because he’d put me out of business. And I think he knows that.”