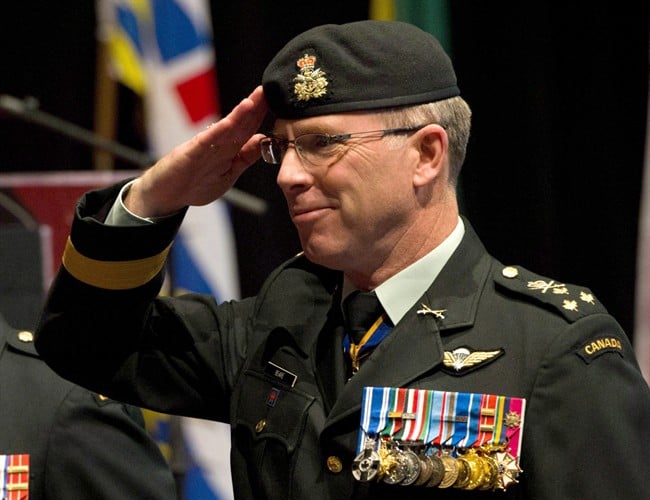 Lt.-Gen. Stuart Beare is shown in this file photo in Ottawa in 2012. Canada will send troops, jets and warships to participate in a massive NATO training exercise next year in a deployment that could be the first step towards deeper involvement in the alliance’s long-term strategy to counter a resurgent Russia. (Sean Kilpatrick/The Canadian Press)

OTTAWA – Canada will send troops, jets and warships to participate in a massive NATO training exercise next year in a deployment that could be the first step towards deeper involvement in the alliance’s long-term strategy to counter a resurgent Russia.

The units will participate in a test of the military alliance’s crisis response brigade, The Canadian Press has learned.

The exercise, known as Trident Juncture 2015, will be held in Italy, Spain and Portugal over several months and built around a scenario where NATO responds to an attack against a member country.

“We are planning to commit tactical forces, maritime, air and land to the live (fire) exercise,” Lt.-Gen. Stuart Beare, the country’s joint operations commander, told The Canadian Press in a recent interview.

It is a significant decision because NATO is pushing behind the scenes to significantly expand the size of its rapid reaction force. The alliance already announced last week it plans to base soldiers in eastern Europe to reassure jittery allies.

The crisis response unit — currently compromised of 13,000 high-readiness troops, a headquarters and reserve formations — operates on a rotational basis with different nations committing forces for up to a year at a time.

Next year’s participation in the exercise does not commit Canada to become part of that rotation, but it could set the stage.

“Those are strategic and political decisions,” said Beare. “I can’t answer the question specifically, but I can tell you we are acting in a way that, if we do, we’ll be really, really good at it.”

Taking part in the exercise would help the military reacquaint itself with how NATO does business on its home turf, a familiarity that has been lost since the last Canadian Cold War garrison was withdrawn from Europe in the 1990s.

What is unclear heading into this week’s NATO summit in Wales is whether the Harper government is prepared to foot the bill to be a regular member of the quick reaction force, which U.S. officials have suggested could see its leading elements based in central Poland around a base that hosted NATO training this summer.

Two rotations of Canadian troops, roughly the size of a 150-man company, have taken part in those recent exercises.

Being part of the rapid reaction force carries with it a whole different set of expectations — most notably being prepared to start shooting if a NATO member is attacked.

The detachment is a relatively new construct within the alliance and something defence ministers only began to seriously wrap their heads around in February 2013 as plans were being drawn up for the withdrawal from Afghanistan.

Steve Saideman, an expert on NATO, is skeptical about how the force would work given previous missions where countries have insisted on maintaining control over their own troops, and imposed restrictions on what they could do.

That was the experience both in Libya, where some countries refused to conduct risky air-to-ground attacks, and in Afghanistan, which saw a handful of countries like Canada, the U.S., Britain, France, the Netherlands and Denmark do most of the fighting.

“I have a hard time imaging a rapid reaction force being rapid,” said Saideman, who is chair of the Paterson School of International Affairs at Ottawa’s Carleton University.

“I don’t feel confident they’ll be able to overcome the problems that have existed and have been baked into NATO.”

Article 5 of the NATO charter — the alliance’s all-for-one and one-for-all provision — has a little recognized opt-out clause, Saideman noted.

He’s also not convinced the Harper government is willing to commit the cash necessary for a long-term commitment now that it has extricated itself from Afghanistan. The Conservatives plan a balanced budget for next year’s election, and surely hope to spend aggressively on voter-friendly measures, he added.

“It costs money to put troops out there for a period of time,” Saideman said.

NATO Secretary-General Anders Fogh Rasmussen said the alliance will press ahead with the force and it will be a major topic for leaders at this week’s summit.

“We will adopt what we call a readiness action plan with the aim to be able to act swiftly in this completely new security environment in Europe,” he said in Brussels.

“We have something already called the NATO response force, whose purpose is to be able to be deployed rapidly if needed. Now it’s our intention to develop what I would call a spearhead within that response force at very, very high readiness.”