Even before it was hit by a series of setbacks, Canada’s Pacific fleet faced questions about its readiness

HMCS Winnipeg never had a chance. The frigate was docked at CFB Esquimalt’s “C” Jetty at the Pacific naval base on Vancouver Island, during a calm morning in April, when an out-of-control fishing trawler, American Dynasty, slammed into her port side and sent a wall of water over her bow. Six maintenance crew, all civilians, were injured, and the cost of repairs is being kept a mystery—the same way a coach won’t say much about a player’s injury during the playoffs. The frigate was on its way from a massive, $250-million refit, a new lease on life that gave the ship more muscle on the high seas. Instead, the incident with the American trawler stopped HMCS Winnipeg’s revival in its tracks. Now, the ship is in dry dock for repairs. The incident defines the Navy’s streak of bad luck, particularly among a West Coast fleet that can’t catch a break.

Last month, the destroyer HMCS Algonquin and the supply ship HMCS Protecteur collided during towing manoeuvres on the way to Hawaii. The Navy is now without a destroyer on the West Coast and, in the 10 days it took to repair the Protecteur, the Navy was left without a supply ship. A pair of frigates are dry-docked as they undergo the same modernization as the Winnipeg. The HMCS Chicoutimi, the troubled submarine purchased from the British Royal Navy that caught fire on her voyage to Canada in 2004, is reaching the end of a long period of heavy maintenance. Until she’s ready for deep water, the Navy has but a single operational submarine in the Pacific. Meanwhile, critics say the Navy’s modest Pacific fleet of six Kingston-class coastal defence ships are functionally obsolete. 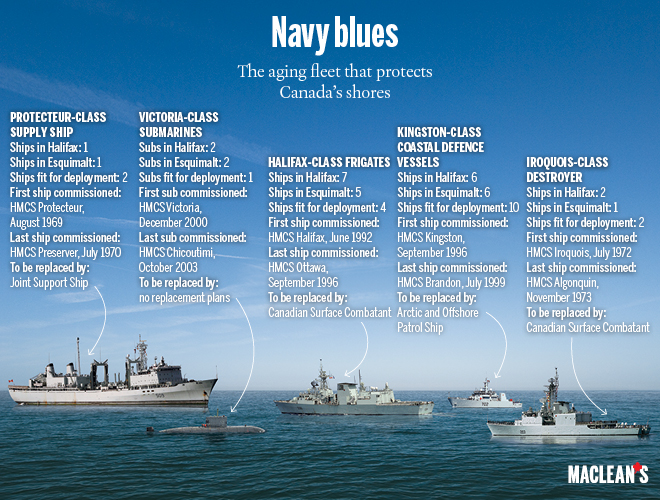 The Pacific fleet, even at its strongest, is made up of fewer ships than are stationed at CFB Halifax. Traditionally, that configuration has made sense, given Halifax’s proximity to the Arctic, the rest of the western hemisphere and regular overseas operations in the Mediterranean and Arabian seas. But in recent months, a simmering debate has broken out among military observers over whether Canada should begin to shift its naval resources to the increasingly volatile Pacific—where the Japanese, Chinese, Australians and Americans are all beefing up their fleets, and North Korea constitutes a lingering threat. The Chinese navy is training aggressively on a repurposed Soviet aircraft carrier. India is developing its first homegrown carrier, INS Vikrant, which will enter service by 2018, while it’s set to take possession of a retrofitted Russian carrier later this year. Australia is building amphibious assault vessels capable of carrying 18 helicopters and landing 2,000 soldiers. And while Japan’s constitution forbids the use of offensive weapons, in August, its navy launched the Izumo, a flat-topped destroyer capable of carrying up to 14 helicopters. Canada’s Pacific fleet, even at its strongest, is not nearly as ambitious.

The Navy insists it has no plans for a shakeup, saying the current distribution “meets our strategic and operational requirements.” But, says Sen. Colin Kenny, who chaired the Senate’s national security and defence committee for nine years, the recent collision between Algonquin and Protecteur laid bare the fragility of the existing Pacific fleet. “The Pacific fleet is severely hampered and hobbled until those two vessels get back and operate,” he said in the days before Protecteur was deemed seaworthy.

The decline of Canada’s Navy is far from a recent occurrence. Budget cuts in the late 1990s slashed military funding, just as the Armed Forces deployed boots and boats to fight terror in Afghanistan and the Arabian Sea. By 2005, with the Navy’s resources severely strained, Vice-Admiral Bruce MacLean, then-chief of the maritime staff, warned a Senate committee the Navy faced “an overall trend of decay.” Due to personnel shortages, the Department of National Defence (DND) had already been forced to take the HMCS Huron, one of four Iroquois-class destroyers that had been refitted and modernized, out of service. In 2007, after having been mothballed for seven years, the Navy used the Huron for target practice and a flotilla of Canadian ships pummelled her with artillery off the coast of Vancouver Island until she sank to the bottom of the Pacific.

Huron’s scuttling left a single destroyer, the Algonquin, stationed at Esquimalt. The Navy won’t say how long she will be laid up in dry dock after her collision with the Protecteur. And that leaves a serious gap in Canada’s ability to participate in any Pacific operations, says Elinor Sloan, a professor of international relations at Carleton University and a former DND analyst. When a destroyer is operational, the ship can serve as a command post for a task group at sea, thanks to its advanced communications technology. Destroyers also carry sophisticated weaponry, including surface-to-air missiles capable of defending a group of ships. Canada’s Halifax-class frigates are in the middle of a seven-year-long midlife refit and, as they come out of dry docks, they’ll be equipped with the same technology to quarterback a task group. But only the destroyers have air-defence weaponry at their disposal. “The frigates won’t be able to do that, upgraded or not,” says Sloan. The Navy could, in theory, deploy a frigate-led mission, but the ship’s reduced capabilities would put the mission at greater risk. “Let’s say you’re operating along a coast, and a land-based missile comes your way,” she says. “You wouldn’t have that ability to shoot it down.”

This all means the only West Coast ships in working order are the six coastal defence vessels. But Sloan says the 20-year-old vessels are wholly unsuited to modern naval operations. They’re Cold War ships, she says, crewed mostly by reservists, which were intended for anti-mine warfare. “They can’t operate in ice. They can’t go out to the end of the exclusive economic zone to enforce illegal fishing,” she says. “They’re not very quick. They can’t follow ships that are bringing illegal immigrants.” In other words, they’re coastal defence vessels that can’t defend the coasts.

The fortunes of Canada’s Navy are set to improve, eventually. In 2011, the federal government did announce a massive, $35-billion investment in new warships and support vessels set to roll out over the next three decades. First off the line in 2015, assuming everything stays on schedule, will be the Arctic and offshore patrol ship set to replace the Kingston class. In time, the Navy will build a new supply ship and replacements for its current fleet of destroyers and frigates. However, Canada’s shoddy track record of military procurement, be it ships, fighter jets, helicopters or subs, doesn’t inspire confidence that the new vessels will sail on time.

David McDonough, a post-doctoral fellow at the University of British Columbia, says that, given shifting tensions in the Pacific and the spate of problems facing Canada’s Navy there, a moderate shift of resources from the Atlantic to the Pacific—including all of the Navy’s submarines—makes sense. In his mind, it comes down to mathematics. “If you only have one [supply] ship on each coast for the foreseeable future, and an accident happens, you have to rely on submarines for any expeditionary operation,” he says. “Surface ships can last 12 days. Submarines can probably last a month without any sort of replenishment.” Focusing any transfer of resources on submarines also helps avoid the political fallout that would come with moving surface vessels. “Each surface ship has roughly 200 people,” as well as support staff on land, says McDonough. “It’s an economic hit I don’t think Halifax would appreciate. We might be able to move one ship, or two ships, at most.” The subs, however, require fewer sailors—48 per boat—and less infrastructure.

Basing the subs in Esquimalt could also lend a hand to allies in the Pacific region and open the door to a permanent Canadian presence overseas, says McDonough. “Most of our allies in the region are increasingly fixated on anti-submarine warfare,” he says. “The U.S. would just love having our submarines there to train against, which actually could be leverage to allow us to base submarines at one of their bases—say, Guam, or Diego Garcia [in the Indian Ocean].” Sloan says Canada already stations high-ranking personnel overseas. She thinks a logical next step is sending a vessel offshore. “It would just be token,” she says, but such a move would jibe with a corresponding American shift to the Pacific. “They’re not moving their ships from Norfolk to San Diego, which would be the analogy of Halifax and Esquimalt,” she said. “They’re physically moving resources to Guam.”

For all the armchair strategizing, the Navy faces perhaps a more intractable question than where to deploy its vessels: how to reverse declining morale that has made it difficult for that stream of the forces to find new recruits. Kenny points to a “significant uptick” in morale among the Army and Air Force during operations in Afghanistan. On the ground and in the air, the forces were in good spirits. “In the Navy, throughout that period, not so much,” says Kenny. Canadian warships were active in the Arabian Sea, but with “not nearly the level of intensity” as the other branches of the military. “If you’re going to be a soldier or a sailor, you’re doing it for the action,” he says. “That, in my mind, was one of the principal reasons why the Navy’s also having a recruiting problem.”

Recent problems with the Pacific fleet have only made matters worse, says Kenny. When Algonquin and Protecteur collided, they were on their way to International Fleet Week in Australia, and slated to make diplomatic stops at ports all over the Pacific region. The Navy cancelled the tour, leaving hundreds of sailors onshore—the last place they’d like to be.