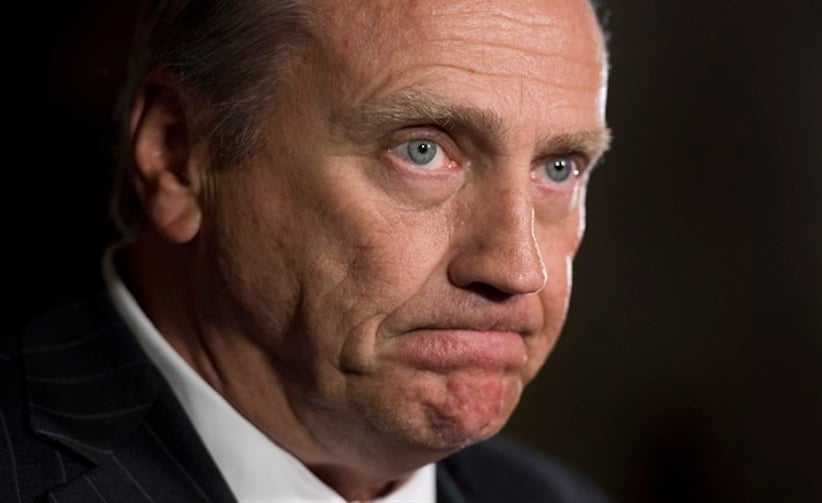 Government whip and chair of the Board of Internal Economy John Duncan. (Adrian Wyld/The Canadian Press)

OTTAWA – New Democrat MPs are on the hook for $1.17 million after a secretive House of Commons committee found them guilty Wednesday of improperly spending parliamentary resources for partisan purposes.

The MPs in question owe $36,000 to the House, while the remaining $1.13 million is owed to Canada Post, Conservative MP John Duncan told a news conference.

“The bylaws are clear: members of Parliament are accountable for any use of House resources,” said Duncan, a spokesman for the board of internal economy — the multi-party committee that oversees Commons spending.

“As such, the House administration has been directed to seek reimbursement directly from the members.”

The multi-party board has been investigating almost 2 million partisan flyers sent by the NDP MPs to households in 26 different ridings, including four that were in the midst of byelections late last year.

It will be up to the individual MPs to work directly with Canada Post to arrange repayment, Duncan said.

“The board cannot compel members to repay these costs; however, it is incumbent on these members to work with Canada Post to repay the $1.13 million.”

The board has also been investigating the use of Commons budgets to pay the salaries of NDP staffers in satellite party offices in Montreal, Quebec City and Toronto, but Duncan said a decision on that issue has not been made.

Within minutes of Duncan’s news conference, NDP House leader Peter Julian was hosting one of his own — with party lawyer Julius Grey in tow.

“We believe that we have followed the member’s bylaws and the Canada Post Act, and we will now have to fight this process — by a partisan secretive body that is dominated by Conservatives — outside of Parliament,” Julian said.

The board has acted as judge, jury and executioner, passing judgment without holding a hearing, calling witnesses or providing an opportunity to review the evidence, he added.

“None of this will hold up in a court of law.”

A simple reading of the act shows clearly that “there couldn’t possibly be an illegality,” added Grey.

“It is obvious that we have a direct assault on the basic principles of the Constitution. In these circumstances, there is no choice but to proceed to judicial review…. It’s an invention, it’s a complete miscarriage of justice.”

NDP Leader Tom Mulcair has accused Conservatives and Liberals of turning the board into a “kangaroo court” where only the NDP has been targeted for practices indulged in by all parties.

Tom Mulcair said earlier Wednesday that a guilty verdict and repayment order would not come as a surprise.

“We’re taking it for granted, frankly, that they’re going to come out against us,” he said.

Duncan has said the Commons could garnishee the budgets of New Democrat MPs if they don’t voluntarily repay.

As he has done repeatedly since controversy erupted over NDP mailings and satellite offices several months ago, Mulcair insisted New Democrats have followed all the rules.

The Speaker of the Commons, Andrew Scheer, and House of Commons administration have contradicted NDP claims that they approved the mailings or the use of MPs’ office budgets to pay staffers in satellite offices.