Government would accept the more minor amendments after Senate debate, but not the assisted-dying bill's central pillar 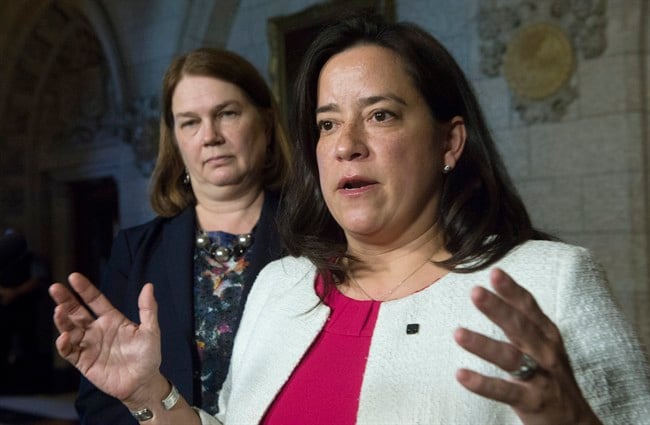 Minister of Health Jane Philpott looks on as Minister of Justice and Attorney General of Canada Jody Wilson-Raybould responds to a question from the media in the Foyer of the House of Commons on Parliament Hill Thursday June 16, 2016 in Ottawa. THE CANADIAN PRESS/Adrian Wyld

OTTAWA – The House of Commons bounced the assisted dying bill back into the Senate’s court Thursday, rejecting an amendment that would have allowed suffering Canadians who aren’t near death to get medical help to end their lives.

Appointed senators must now decide whether to stick to their guns or accept the will of the elected chamber, a choice some clearly find agonizing.

“I cannot in all good conscience simply vote down a bill that is better than having nothing at all,” said Conservative Sen. Don Plett, who had hoped to impose more restrictions and safeguards on the right to an assisted death.

Conservative Sen. Doug Black said the Senate did its best to improve the bill and must now defer to the will of the Commons.

But others were adamant that without the primary amendment — which would have deleted the bill’s proviso that medical assistance in dying be available only to those whose natural death is “reasonably foreseeable” — the bill doesn’t comply with the charter of rights or with last year’s landmark Supreme Court ruling, which struck down the ban on assisted dying.

“I will never support a bill … that would strip a group of citizens of their rights that have been recognized by the Supreme Court of Canada,” said independent Liberal Sen. Serge Joyal, who authored the amendment.

“I will never vote for that, never.”

Similarly, James Cowan, leader of the independent Liberals, said: “I won’t support a bill that I believe to be unconstitutional … My position would be that we should stick to our guns.”

The Senate scrapped the foreseeable death requirement during two weeks of lengthy debate in the upper house before passing the bill with seven amendments late Wednesday by a vote of 64-12, with one abstention.

Early Thursday, Health Minister Jane Philpott and Justice Minister Jody Wilson-Raybould announced that the government would accept the more minor amendments. But, as expected, they stood firm on the legislation’s central pillar: that only those near death should qualify for medical assistance in dying.

After a brief debate in the Commons, MPs voted 190-108 to accept the government’s response to the Senate amendments. Only three Liberal backbenchers voted against the government’s position, along with New Democrat, Bloc Quebecois and Green MPs and most Conservatives.

“It is crucial to keep in mind that Bill C-14 was carefully and deliberately crafted as a cohesive and balanced regime,” Wilson-Raybould told the Commons.

“The balance sought in Bill C-14 would be upset by the broadening of eligibility criteria to individuals who are not approaching death without the corresponding safeguards for these specific cases.”

The bill now returns to the Senate, which is expected to debate and vote on the government’s response Friday.

“I think that some changes (the government has accepted) are a good step but that doesn’t address the main issue of constitutionality,” said Conservative Senate leader Claude Carignan, adding that senators need time to reflect on their response.

Senators could simply acquiesce, which the government is clearly hoping they’ll do and which Senate insiders now believe is the most likely outcome. Liberal backbenchers privately say Trudeau told MPs Wednesday that it would be “appropriate” for appointed senators to defer to the will of the elected Commons, and he seemed confident they would do so.

But senators could also “insist” upon their amendment and send it back to the Commons, repeatedly if necessary, until one side or the other gives in. Or they could defeat the bill outright. Or they could shelve it, either by letting it languish in committee or by refusing to vote on it until the government refers the bill to the Supreme Court to test its constitutionality.

The latter route is one that Joyal would like to see debated.

Joyal’s amendment would have replaced C-14’s restrictive eligibility criteria with the more permissive parameters set down by the top court, which directed that medical assistance in dying should be available to clearly consenting, competent adults with “grievous and irremediable” medical conditions that are causing enduring suffering that they find intolerable.

C-14 would allow assisted dying only for consenting adults “in an advanced stage of irreversible decline” from a serious and “incurable” disease, illness or disability and for whom natural death is “reasonably foreseeable.”

Canada has been without a criminal law governing assisted dying since June 6, when the court’s ruling went into effect. Philpott said many doctors are reluctant to provide medical assistance in dying in the midst of legal uncertainty and used that argument to pressure senators to give in on the bill.

“We realize that the Senate is aware of that as well,” she said. “We hope that they will recognize that it’s important that we get the legislation in place.”