MONCTON, N.B. — A nerve-racking search for a heavily armed gunman in Moncton entered its second day Thursday evening after he allegedly shot three New Brunswick Mounties dead and injured two others in one of the worst mass shootings in the RCMP’s history.

The suspect, Justin Bourque, 24, was last spotted Thursday morning but he evaded capture after he went into a wooded area, the RCMP said.

“This is working through your worst nightmare,” Assistant Commissioner Roger Brown, the Mounties’ commanding officer in New Brunswick, told a news conference.

Brown appealed for public calm in a city that has been under a virtual siege since Wednesday evening.

“This is a very, very dangerous situation,” he said.

Officers were unable to confirm the identity of the suspect on two other occasions when he might have been sighted Thursday, Supt. Marlene Snowman said.

As the day turned to dusk, the RCMP asked residents for the second night in a row to turn on their exterior lights in an effort to help their search. 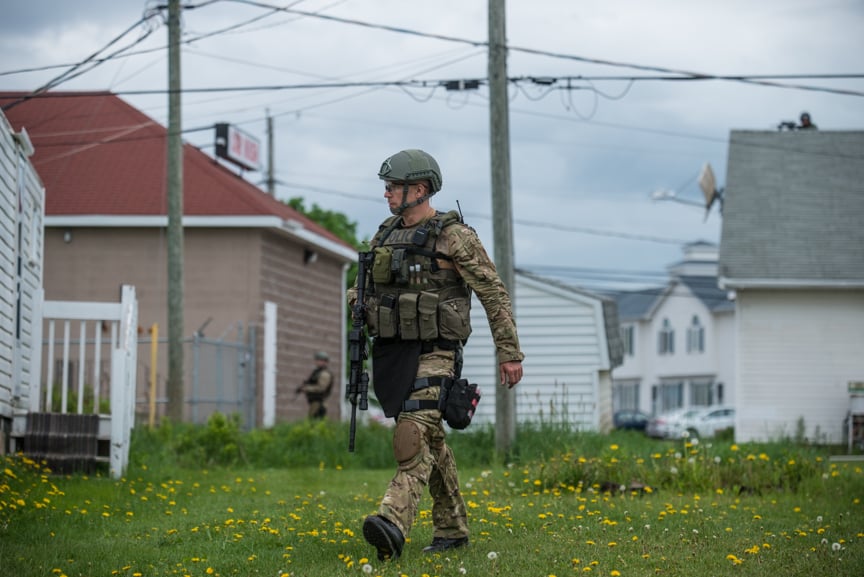 Heavily armed officers on streets of Moncton. (Photo by Scott Munn for Maclean’s)

Police including tactical officers began their manhunt for the shooter Wednesday at around 7:30 p.m. when they responded to a call about a man walking along a road with what was believed to be a gun.

After the call, shots were fired and officers called for backup, Snowman said.

Brown said police officers from across the country have been brought in to help arrest the suspect.

“The RCMP family is hurting,” he said. “Greater Moncton is hurting as is New Brunswick as is our country.”

Police urged people with any information on Bourque’s whereabouts to call 911. The Moncton man was wearing military camouflage and carrying two rifles in a picture of him released by police on Twitter on Wednesday night.

Snowman said Bourque was carrying high-powered firearms, is not known to the police and investigators were trying to piece together his background.

Residents in the area where police searched were urged to stay inside their homes and lock their doors.

The RCMP released a map of a large swath of the northwest section of the city, including a heavily wooded area, where they wanted people to remain indoors.

In the afternoon, a large number of police officers could be seen in a part of the perimeter with their weapons drawn, some peeking around buildings. Others were patrolling streets within the cordoned off area. Armoured security trucks were also visible.

Officers, including members of a tactical unit, were seen in front of one building. 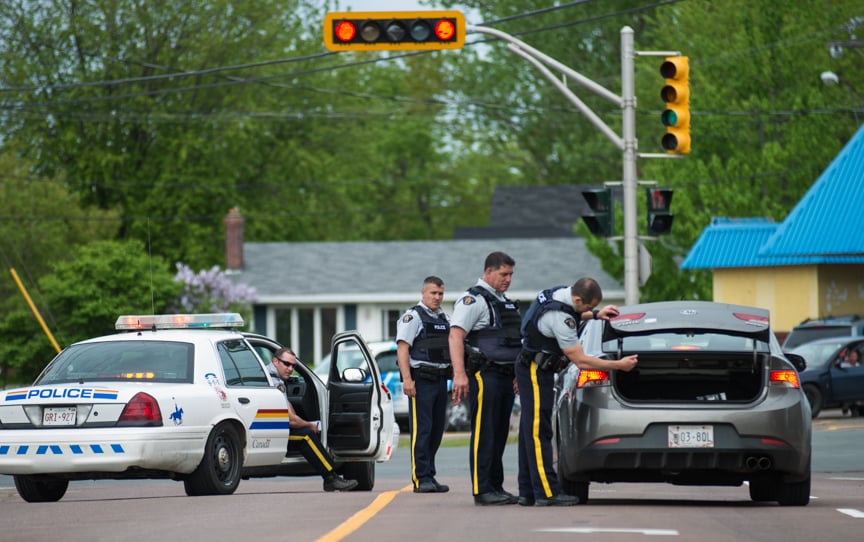 (Photo by Scott Munn for Maclean’s)

Police also warned people to expect roadblocks and traffic disruptions. Schools and government offices were closed, buses were pulled off the roads, and surgeries were cancelled Thursday and Friday.

Brown said the two wounded officers underwent surgery in hospital Thursday. Cpl. Chantal Farrah later said that one of those officers was released. The injuries suffered by the other officer were not considered life-threatening.

Brown said he met with the families of the officers who were shot earlier in the day.

“As you can all imagine, they’re hurting,” said Brown. “There’s actually no way to describe the level of hurt.”

The identities of the officers who were shot have not been released by police.

But late Thursday, the National Post identified one of the officers fatally shot as Const. Dave Ross, a police services dog handler with the RCMP. The newspaper quoted the sister-in-law of the man’s wife as saying he had a young son, with another child expected in September.

People laid flowers in a makeshift memorial on the doorsteps of the local RCMP detachment. One of the bouquets was wrapped in a ribbon reading, “Fallen heroes.”

Mayor George LeBlanc was visibly shaken by what happened in his normally quiet city of 69,000.

“Never in my darkest dreams did I ever think that we would be facing what we’re facing today in Moncton,” he told a news conference. “If this can happen in Moncton, it can happen anywhere.”

“It’s so important that people stay locked down in their homes and stay off the streets and allow the RCMP to do their job,” Alward said in an interview.

Dewayne Beers, 46, said he saw a bloodied female officer taken away from a police vehicle with a shattered window across from his home.

Beers said it was shocking to look out his window on the usually tranquil, dead-end street and see an RCMP officer bleeding and being supported as she was helped into a police SUV.

“It’s quite traumatic,” he said. “We stayed here because it’s safe to raise a family here.”

Beers said the car she was sitting in was still parked across from his house on Penrose Street as of Thursday afternoon _ a stark reminder of a nightmarish and sleepless evening the day before.

Daniel St. Louis, a commercial photographer in Moncton, was among the first on the scene Wednesday around 8:30 p.m. when he came across two police vehicles on different streets with blood visible inside.

He said no one was around, except for a few curious neighbours peeking through their front doors.

One of the vehicles, a marked police cruiser, was surrounded by shattered glass. The other, an unmarked SUV with its lights still on and the driver’s side door left open, had several bullet holes through its front windshield.

St. Louis, 51, said he saw something shortly after that will always haunt him.

“I walked over and I saw two feet, facing the street, toes up,” he said. “I realized, ‘Oh my God. There’s somebody down.’ As I got close, I realized it was an officer and this is not a good situation.”

Prime Minister Stephen Harper offered his condolences to the families, colleagues and friends of those affected by the shootings.

“This should obviously remind us that our men and women in law enforcement put their lives on the line every day to serve and protect us as Canadians,” Harper said while in Brussels.

In the House of Commons, MPs observed a moment’s silence and the flag over the Peace Tower flew at half-mast.