The multinational giant beat a bid for the Ontario township of Centre Wellington, which was seeking a safe drinking water supply 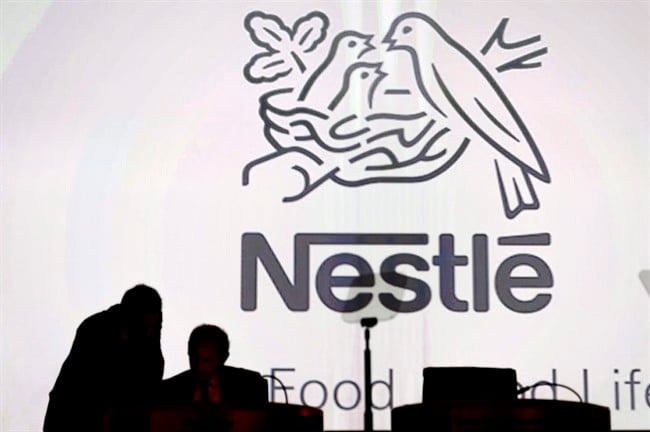 Nestle’s directors speak in front of the Nestle’s logo during the general meeting of the world’s biggest food and beverage company, Nestle Group, in Lausanne, Switzerland, April 7, 2016. (CP)

TORONTO – A small but fast growing Ontario community looking for a safe drinking water supply has been outbid in its attempt to buy a well by multinational giant Nestle, which acquired the site to ensure “future business growth.”

Nestle, which can already take up to 3.6 million litres of water a day for bottling at its site in nearby Aberfoyle, Ont., bought the well from Middlebrook Water Company last month after having made a conditional offer in 2015.

A spokesman for Nestle said the company had “no idea” the other bidder for the five-hectare site was the Township of Centre Wellington, but it waived all conditions and matched the competing offer so it could complete the purchase.

Nestle said the Middlebrook site will be a “supplemental well for future business growth” and a backup for its plant in Aberfoyle.

Township Mayor Kelly Linton said Nestle dropped its conditions, including a pump test to determine if the well met its quality and quantity requirements, after it learned of the competing bid. The municipality wanted to purchase the well to keep its water supply “safe from commercial water taking” long into the future, added Linton.

“When water taking is solely within the jurisdiction of the Ministry of the Environment and Climate Change, the only role we really have as a municipality is to comment to the ministry, and it issues all the permits,” he said. “So purchasing the well would automatically give us control, and that’s what we were looking for, control of our water source and not just the ability to comment.”

The mayor wouldn’t disclose the dollar value of the municipality’s bid, but said it had no conditions attached.

The Ministry of the Environment, which has not yet ruled on Nestle’s application for a pump test, called the sale of the Middlebrook property a “private transaction,” and said its only role was to evaluate the proposed water-permit application.

In the meantime, Nestle is allowed to keep taking water from its well in Aberfoyle while the ministry reviews the company’s application to renew its water-taking permit, which expired in July.

Water-taking permits became a hot-button issue after The Canadian Press reported last month that the province charges $3.71 for every million litres of water.

In Ontario, the permits allow municipalities, mining companies and golf courses — in addition to the water-bottling companies — to take a total of 1.4 trillion litres out of the surface and ground water supplies every day.

Responding to public criticism over the use of water resources in the province, which was hit by a severe drought this summer, Premier Kathleen Wynne called some of the conditions for the permits, including the fee, outdated. She told Environment Minister Glen Murray to review the rules for bottled water companies.

The Council of Canadians, a non-profit social action organization, said the Grand River watershed, where Nestle’s well and bottling plant are located, is a fragile ecosystem feeding into Lake Erie that must be protected.

“The Nestle well near Elora sits on the traditional territory of the Six Nations of the Grand River, 11,000 of whom do not have access to clean running water,” said council chair Maude Barlow.

According to Health Canada, about 2,000 people in Six Nations are hooked up to the community water system, but “many residents use cisterns for drinking water and receive deliveries from provincially regulated, off-reserve water providers.”

Ontario’s former environmental commissioner warned in a 2012 report called “Water-Taking: Leave Something for the Fish,” that the province wasn’t even recovering the cost of its water quality programs, and said full-cost water pricing would be a “powerful catalyst for water conservation.”

Nestle, which has 2,500 employees in Ontario, over 300 at Nestle Waters Canada, said it was prepared to pay more if rates were increased, but only if all companies with water-taking permits face the higher fees.

“We fully agree that all groundwater users should pay their fair share to fund the management of our water resources and all users must be treated equitably,” the company said in an emailed statement.

“Over the last 15 years in Aberfoyle, Nestle Waters has created shared value for the region as the largest (local) taxpayer, significant regional employer, community partner and environmental monitor while meeting growing demand in Canada for healthy beverage choices.”

Barlow, of the Council of Canadians, argues that there is no need for a bottled water industry in Canada because tap water for virtually everyone — except First Nations — is perfectly safe and tested daily.

“Allowing a transnational corporation to continue to mine this water is a travesty, especially given that most local people can get clean, safe and affordable water from their taps,” she said.