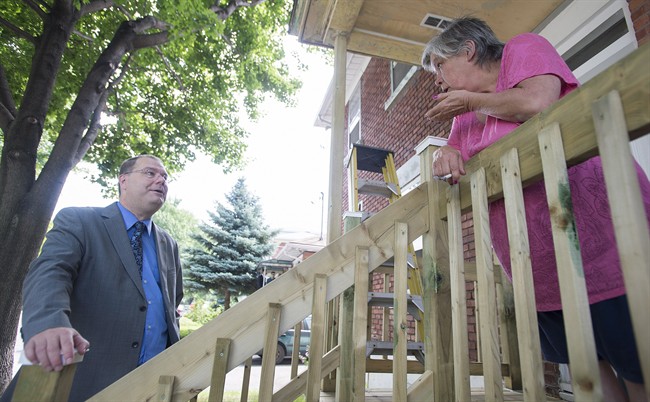 MONTREAL – The Bloc Québécois’s new leader is spending his summer talking up Quebec independence, a bold campaign that comes just months after his Parti Québécois cousins suffered an historic defeat for boosting the very same idea.

Mario Beaulieu, elected leader of the federal Bloc in June, has already begun knocking on Quebecers’ doors in hope of rekindling enthusiasm for independence, even though the next election could be more than a year away.

After a recent canvass in east-end Montreal, Beaulieu told The Canadian Press he thinks the provincial PQ erred last spring by failing to prepare the public for its abrupt sovereignty push during the election campaign.

“It may seem paradoxical, but to me the last election in April demonstrated that we have to speak about independence before, during and after elections,” Beaulieu said in the city’s Pointe-aux-Trembles district, an area he’s thinking about running in.

“We used the same wait-and-see approach for 20 years and it brought us to a very strong defeat of the Bloc Québécois in 2011 and a defeat of the Parti Québécois last April.

“I think we have to change strategies and bring back independence to the forefront.”

The Bloc chose Beaulieu, and his noted hardline independantiste approach, to help the party recapture dozens of seats it lost in 2011 when the NDP swept through Quebec.

His strategy will represent a shift for Quebec’s pro-independence political outfits, which have shied away from promoting the sovereignty project in recent years, as polls have suggested most Quebecers oppose the idea.

The Bloc, in particular, has considered itself as the protector of Quebec’s interests in Ottawa, not the vehicle to drive the independence movement.

But with Beaulieu calling the shots, change is already underway.

Beaulieu, who gained notoriety as a vocal defender of French-language rights, aims to mount a “permanent, very major campaign” to promote independence under the Bloc banner, an aggressive approach he hopes will reunite sovereigntists who have splintered into smaller groups.

A party that boasted 54 of Quebec’s 75 MPs a decade ago, now has just four bodies in the House of Commons. In the next election, 78 ridings will be up for grabs in Quebec as Parliament expands to 338 seats.

Beaulieu said the party’s MPs could multiply five-fold, a gain that would likely have to come at the expense of some of the NDP’s 56 Quebec seats.

The Bloc’s climb back to relevance, however, will be a steep one.

Beaulieu was reminded of that during his recent doorbell-ringing tour of Pointe-aux-Trembles, an area he proudly described as a “stronghold” even though the party lost its seat there in 2011 to the NDP.

A local named Charlyne Gervais, a longtime member of the Bloc and PQ, challenged Beaulieu to convince her why she should ever vote for his party again.

“Mr. Duceppe was adored by everyone, but what did he do?” said the woman as she smoked a cigarette on her front porch, referring to former Bloc leader Gilles Duceppe, who stepped down after the party’s devastating 2011 loss.

Gervais said she regretted voting for the Bloc in 2011.

“I told myself I voted for nothing,” she said. “It was a vote based on emotion, not on judgment.”

A man who lived down the street told Beaulieu he supports Quebec independence, but he declined the Bloc leader’s offer to join the party for $5.

“I think it will still be pretty difficult for (the Bloc),” Pascal Blanchard said after his chat with Beaulieu.

“They have lots of work to do to recuperate the independantiste and sovereigntist vote.”

An SOM poll taken in June suggested only 19 per cent of Quebecers supported Beaulieu’s plan to make sovereignty the Bloc’s No. 1 goal. The survey also said just 43 per cent of respondents thought the Bloc was still necessary.

A Leger poll taken in mid-June suggested the Bloc had support of only 17 per cent of Quebecers, compared to 12 per cent for the Conservatives and 34 per cent for both the NDP and Liberals.

Beaulieu, a polarizing figure, also has much work to do within his own party.

He did not have the support of any Bloc MPs. Instead, three of them backed their fellow MP, Andre Bellavance.

In his victory speech, he angered veteran Bloquistes — including Duceppe — by criticizing the party for failing to promote sovereignty and for its attitude of “defeatism” over the last 20 years.

Montreal La Presse recently reported that his win prompted a half-dozen former Bloc MPs to give up their plans to run again in the next election.

One of those ex-MPs is Marc Lemay, who said Beaulieu is making a mistake by trying to turn the party into “the locomotive” to promote independence. He said the party should instead continue its focus on defending the interests of Quebec in Ottawa.

“For me it’s obvious, Mr. Beaulieu is in the wrong party … He should have run for the Parti Québécois,” said Lemay, who held the northern Abitibi-Temiscamingue riding between 2004 and 2011.

“I can’t wait to watch when it comes time for them to try and to find Bloc Québécois candidates in the regions,” Lemay said.

“They will probably do what the NDP did in many ridings: they will present names and that’s it.”

Beaulieu’s victory also prompted riding association executives to quit, with one calling Beaulieu a “clown” on Facebook and suggesting that Bloc MPs create a new party.

“I didn’t think he was the best man for the situation,” said Bruno Grenier, who felt regret for calling Beaulieu a clown, but still refused to follow him.

“I really want us to achieve independence, but I want us to do it with everybody.”

Beaulieu has a history of confrontations with anglophone media outlets, particularly in his former roles leading French-language rights groups, including the Societe Saint-Jean-Baptiste.

He’s made headlines for calling late author Mordecai Richler an “anti-Quebec racist” and, following the 2012 deadly election-night shooting during the PQ’s victory party, he blamed some Anglo media for creating a “Quebec-bashing” environment.

Beaulieu has also led campaigns to denounce English words found on signs in Montreal and has even refused to field English questions from reporters.

Though he mostly spoke English during his interview with The Canadian Press, he said he’s considering a policy that would see him give only French interviews to journalists on Quebec soil.

Beaulieu, 54, who grew up in the predominantly anglophone western suburbs of Montreal, said his quest to protect the French language remains close to his heart.

He said he’s been called an “Anglophobe,” a tag he disputes.

“I am often introduced as the super-radical and I believe that there’s absolutely nothing radical about me,” Beaulieu said.

Growing up in a federalist family, Beaulieu only gravitated toward the sovereigntist cause in his late teens after moving to central Montreal, where he said he realized French was in decline.

He said he didn’t cast a ballot in the 1980 referendum on Quebec independence and acknowledged he likely would have voted “No.”

“Then I became conscious more of the fact that Quebecers are a nation … And gradually I became indepandantiste,” Beaulieu said.

Beaulieu, who won the leadership with more than 53 per cent of the vote, has earned some prominent support for his determined push to make sovereignty the Bloc’s primary goal.

“I think it’s individuals like (Beaulieu) that we need to relaunch the battle for national independence, which should not be abandoned,” former PQ premier Bernard Landry said in a video posted on Beaulieu’s YouTube page.

He also earned support on the streets of Pointe-aux-Trembles, where hopeful sovereigntists like Lyne Allard wished him luck. “You have a big hill to climb!” she said.

Beaulieu remains undaunted even as people write him off and the Bloc.

“The independentiste movement was declared dead very often throughout history and it came back (even) stronger each time,” he said.