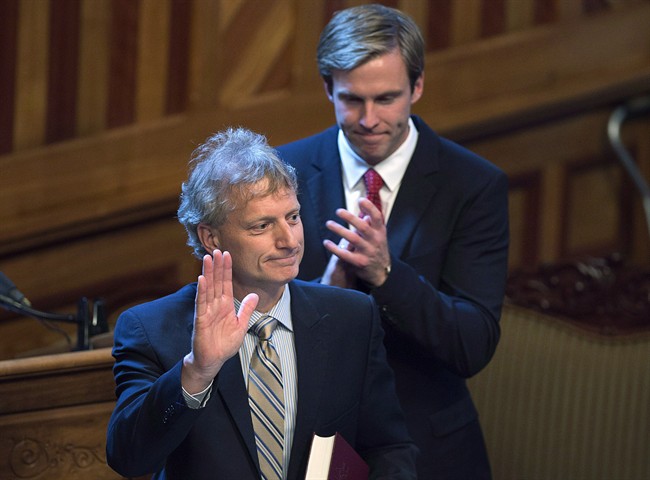 FREDERICTON – New Brunswick’s Liberal government had warned for weeks that its first budget would be painful for the province, but when it was tabled Tuesday the finance minister made it clear the tax increases and spending cuts listed in the document were only the beginning.

In his first budget since the Liberals won the election in September, Finance Minister Roger Melanson announced that the $8.6-billion fiscal plan for 2015-16 will increase taxes for the wealthy, bump up the price of fuel, close some courthouses and eliminate nearly 250 teaching jobs.

“More difficult decisions will be made in our second budget,” Melanson said before releasing the budget.

It includes a projected deficit of $476.8 million, marking the fifth consecutive deficit budget since the Liberals lost power in 2010.

In his budget speech, Melanson said the province has faced many challenges in recent years, including weak economic growth, a declining and aging population, persistent job losses and rising government debt.

“We still find ourselves in an unsustainable fiscal situation,” he said in a prepared text of his speech. “It would be easy to avoid making difficult decisions and leave the problems we face to the next generation. We are not going to do that.”

Effective Wednesday, fuel taxes on gasoline will increase by 1.9 cents per litre and the cost of diesel will rise by 2.3 cents per litre, bringing the province in line with neighbouring Nova Scotia.

The budget also increases taxes for the richest one per cent of New Brunswickers, creating two new tax brackets for those earning more than $150,000.

The government plans to eliminate 249 teaching positions through attrition, close four courthouses while merging their operations into two other facilities and increase premiums for seniors who use the Medavie Blue Cross prescription drug program.

The deficit includes a $150-million contingency fund that was announced earlier this week. If the reserve fund is not used this fiscal year, the deficit is projected to drop to $326.8 million, which would still be $71 million higher than the projected deficit for 2014-15.

The province’s accumulated debt is also projected to rise to $12.6 billion.

Progressive Conservative finance critic Blaine Higgs said increasing the tax load for the wealthy could drive away investment and he suggested the new contingency fund could be used to cover up government mismanagement.

“It’s an excuse to say that if I don’t get the numbers right, I’ll just add it here,” he said.

“The government is saying we’re going to have to wait another year, but we don’t have another year,” he said.

Melanson mused in his speech about reducing the size of the public service and selling off government buildings and Crown corporations, but he made it clear such measures would have to wait.

Last week, the government said raising the harmonized sales tax, implementing highway tolls and increasing corporate taxes were among the most frequent suggestions during public meetings it held during the last two months. None of those suggestions were included in Melanson’s budget.