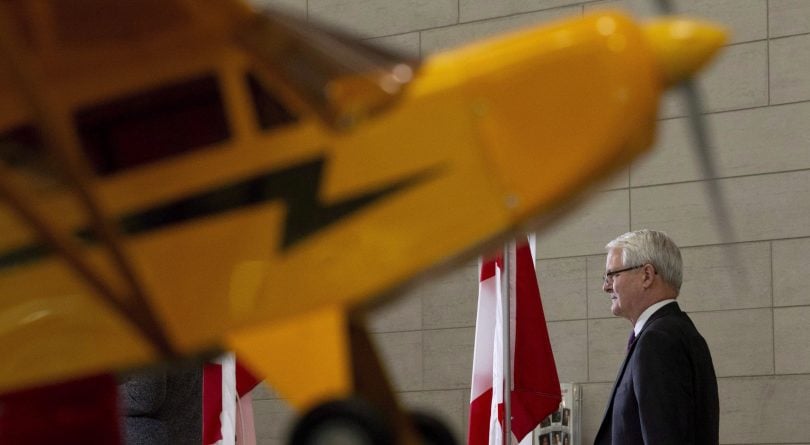 Transport Minister Marc Garneau waits to speak about passenger rights during a news conference at the airport in Ottawa, Monday December 17, 2018. THE CANADIAN PRESS/Adrian Wyld

Some changes are tiny and bureaucratic. Others will fundamentally change the country. The federal and provincial governments have announced numerous new rules for 2019. Most federal, provincial and territorial laws come into force immediately after their passage and assent. But legislation requiring greater planning or notice is typically delayed to allow affected parties time to prepare. Here are 49 new laws that come into effect across Canada in 2019. They range from the arrival of a federal carbon-tax plan to a fee for plastic bags in Prince Edward Island.

Greenhouse Gas Pollution Pricing Act (Canada)
For provinces that either did not adopt Prime Minister Trudeau’s carbon pricing system or failed to develop their own pricing plan—that’s Ontario, New Brunswick, Manitoba and Saskatchewan—the legislation institutes a fee on carbon pollution beyond a certain threshold for larger industrial facilities.

Budget Implementation Act, 2018 (Canada)
The small business tax rate is reduced from 10 per cent to 9 per cent.

Making Ontario’s Roads Safer Act (Canada)
Anyone convicted of distracted driving will automatically have their driver’s licence suspended for three or 30 days. ‘Distraction’ ranges from holding an electronic device in your hands to eating.

Safe and Responsible Retailing of Cannabis Act (Manitoba)
Manitoba’s Social Responsibility Fee is a 6 per cent tax on revenues of licensed cannabis retailers “to ensure they share in the social responsibility costs of cannabis legalization.”

An Act to Amend the Income Tax Act, 2018 (Newfoundland and Labrador)
Eligible residents can claim a $3,000 non-refundable tax credit on their provincial income tax through the government’s new Search and Rescue Volunteer Tax Credit.

Residential Tenancies Act (Newfoundland and Labrador)
Provision to allow landlords to get immediate approval to evict a tenant in extreme circumstances and for victims of domestic violence escaping an unsafe situation to terminate a lease with only 30 days notice without financial penalty.

Environment Act (Nova Scotia)
Cap and trade pricing comes into effect in the province, a system that costs carbon and allows producers polluting above a certain threshold to buy credits from firms that burn less.

Corporations Registration Act and Companies Act (Nova Scotia)
Reduces incorporation fees from $336.40 to $200—the lowest in Canada—and waives the annual registration fee for firms in the first year of incorporation.

Collection and Debt Settlement Services Act (Ontario)
Requires collection agencies with ten or more collectors to record certain calls relating to their activities; those not in compliance subject to fine.

Employment Standards Act (Ontario)
Excludes those working in the film and television industry from compensation for work shifts cancelled within 48 hours and also denies those employees the right to refuse unscheduled work with less than four days notice.

An Act to amend the Act respecting labour standards and other legislative provisions mainly to facilitate family-work balance (Quebec)
Requires employees to adopt a ‘psychological harassment prevention and complaint processing policy’ with a section defining sexual harassment as “behaviour that manifests itself in the form of verbal comments, actions or gestures of a sexual nature.” More generous leave entitlements also come into effect.

MORE: Canada should elect a gender-balanced Parliament in 2019

An Act to improve the performance of the Société de l’assurance automobile du Québec, to better regulate the digital economy as regards e-commerce, remunerated passenger transportation and tourist accommodation and to amend various legislative provisions (Quebec)
Among many changes to the regulation of Quebec’s insurance industry, allows life insurance policy holders to sell an existing policy to a third party for a value determined by an independent appraiser.

Modernizing Ontario’s Municipal Legislation Act (Ontario)
Among various changes, makes codes of conduct mandatory for members of council and local boards. The Act also expands the role of Integrity Commissioners to advise and educate politicians and board members regarding conduct and conflict of interest.

Federal-Provincial Fiscal Arrangements Act (Canada)
Allows Canada Health Transfer deductions to be reimbursed when provinces and territories have taken the steps necessary to eliminate extra-billing and user fees in the delivery of public health care.

MORE: The Trudeau government’s education plan for veterans is stingy

Greenhouse Gas Pollution Pricing Act (Canada)
Under federal legislation, a charge on fossil fuels paid by producers and distributors goes into effect for provinces that haven’t passed their own legislation. In Yukon and Nunavut fuel charges begins July 2019

An Act to implement the Comprehensive and Progressive Agreement for Trans-Pacific Partnership (Canada)
Among the impacts of this trade agreement with Australia, Brunei, Chile, Japan, Malaysia, Mexico, New Zealand, Peru, Singapore and Vietnam is a lowering of the Japanese tariff on Canadian fresh beef to 26.6 per cent from a pre-pact level of 38.5 per cent.

MORE: The Liberal Party insider who helped save the TPP deal

Medicare Protection Amendment Act (British Columbia)
Extends provisions that protect residents against unlawful charges for medical services to include diagnostic services. Doctors can be fined $20,000 for breaches and potentially “de-enrolled” from billing the public health system after multiple violations.

Insurance (Vehicle) Act (British Columbia)
B.C. Residents making injury claims following a motor vehicle accident will now be limited to $5,500 for pain and suffering on minor injury claims, with resolution of disputes through a tribunal, rather than the courts.

Occupational Health and Safety Act (Ontario)
Harassment and violence are now defined as workplace hazard that affect health and safety. Workplaces with 20 or more employees must develop a code of practice on managing violence in the workplace.

MORE: As Nunavut turns 20, Inuit rethink their own governance

Employment Standards Act (British Columbia)
Minimum wage in the province rises from $12.65 per hour to $13.85.

Construction Lien Amendment Act (Ontario)
The legislation sets out timelines for payment to building contractors and subcontractors in order to significantly reduce payment delays. Owners will have 28 days to pay a contractor, while contractors must pay subcontractors within seven days of receiving their payment.

Cannabis Act (Canada)
The sale of cannabis edible products and concentrates are legal “no later than 12 months following” Canada’s Cannabis Act coming into force on October 17, 2018.

Trademarks Act (Canada)
Among amendments are the registration term for trademarks to be reduced from 15 years to 10 years and the definition of a trademark broadened to include nontraditional items like smells, tastes, textures, and moving images

Transportation Modernization Act (Canada)
Expected to come into force Summer 2019, will approve an air passenger ‘bill of rights’ guaranteeing consistent protections expected to include minimum compensation for flight delays and lost luggage as well as clear guidelines for tarmac delays.