After Gander banded together to help passengers on 9/11, New York sends a piece of World Trade Center steel

This Sept. 15, 2001 photo provided by Des Dillon shows the last flight to leave the town after the passengers were stranded there for five days following the Sept. 11, 2001 terrorists attacks. Dillon, a Gander, Newfoundland, Canada resident headed up the emergency response for the Red Cross in Gander. (AP)

NEW YORK CITY, N.Y. – Fifteen years after the terrorist attacks on the World Trade Center, New York City continues to thank the people of Gander, N.L., for opening their arms to thousands of stranded travellers.

A piece of steel beam from the south tower is en route to the airport in Gander, a gift of the Stephen Siller Tunnel to Towers Foundation, named for a New York firefighter killed while helping to rescue people from the towers.

“The people of Gander … stepped up and performed their own acts of courage and heroism on 9/11 and soon thereafter for the thousands of people who descended upon them or were stranded with no advance notice whatsoever,” said Catherine Christman, a spokeswoman for the foundation and cousin of Stephen Siller.

Nearly 7,000 passengers were stranded for three days in Gander when all flights were grounded, and the people of Gander provided food, lodging and other assistance.

Christman said they don’t want to forget what happened in New York, Washington and Pennsylvania that day when almost 3,000 people were killed, but it’s important to also remember what happened in Gander.

“We felt there could be no more fitting way than on the 15th anniversary of 9/11 that Tunnel to Towers bring a piece of actual World Trade Center steel to the people of Gander so that it can be enshrined at the airport where those flights came down and were stranded for so many days,” she said.

An inscription on the pedestal reads: “This piece of World Trade Center steel was presented to Gander International Airport by the Stephen Siller Tunnel to Towers Foundation on Sept. 11, 2016 in gratitude for the profound humanitarian role the airport and people of Gander played in the wake of the attacks on 9/11.” 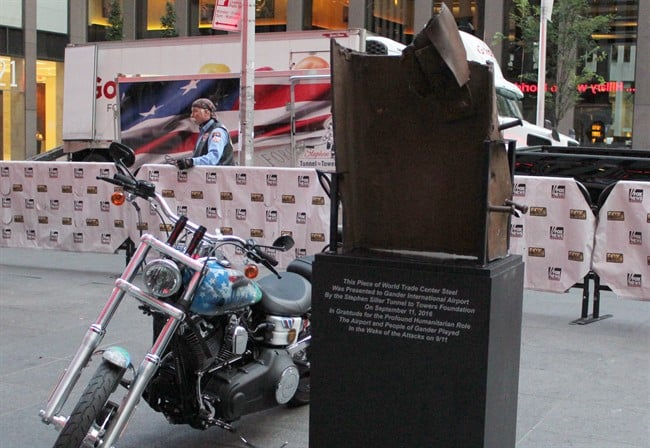 Gander Mayor Claude Elliott said the thank-you from the passengers as they left Gander in 2001 was enough reward, but this relic, to be placed at the Gander Airport, is much appreciated.

“It’s something that we will cherish for a long, long time, and it’s a thank-you from the people of New York,” he said.

MORE: How Gander chipped in on America’s darkest day
Christman watched Tuesday as the steel beam was loaded onto a trailer in New York City to begin a 1,500 mile journey. It’s being towed by a truck donated by GMC, and escorted by current and former firefighters on motorcycles.

Elliott said the escort is an emotional touch.

“It’s personal when those people are travelling with it. It’s a personal commitment on their part and a personal thank-you to us,” he said.

The convoy was scheduled to cross into Canada Thursday morning and arrive in Gander on Sunday, the 15th anniversary of the attacks.

Christman said she will be at the ceremony — set for 4 p.m. (NDT) at the Gander Airport.