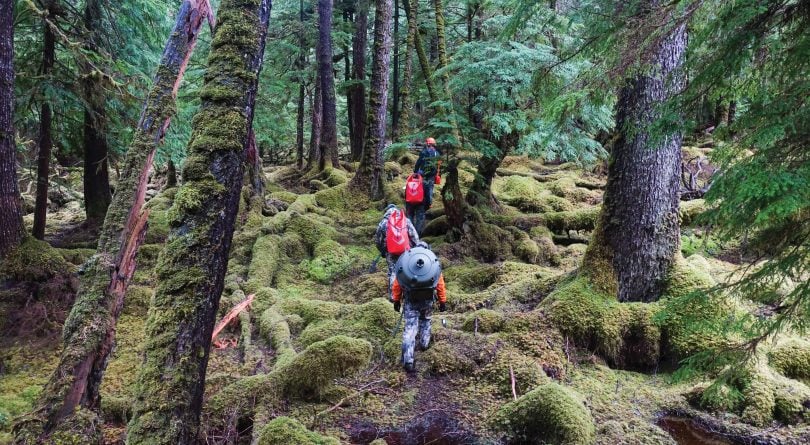 Gwaii Haanas team members hike on Ramsay Island with bait station set ups on their back. Ramsay Island is one of six islands where deer are being removed so that important cultural plants can return and important seabird habitat be restored. (Drew McDonald/Parks Canada)

Haida Gwaii, a blade-shaped archipelago consisting of about 150 islands, sits about 100 km off the coast of mainland B.C. Its southern point is comprised of the Gwaii Haanas National Park Reserve, a patch of isolated isles with animal species endemic to their narrow surfaces. It’s where towering kayd (Sitka spruce, in the Haida language) and ts’uu (red cedar) can be found draped in green moss, and where salmon and octopus meet in the surrounding seas.

It’s also a place steeped in the myth and spirituality of the Haida, whose ancestors watched over the land for more than 12,000 years. But like many parts of Canada, Gwaii Haanas is under siege by a non-native creature: deer. Between 1878 and 1925, European settlers introduced 39 Sitka black-tailed deer to Haida Gwaii, then called the Queen Charlotte Islands, for hunting and amusement. Throughout the 1900s, the animals and their offspring slowly migrated into Gwaii Haanas.

The ungulates procreated uncontrolled for decades; the lack of predators like wolves and cougars on the archipelago, along with its mild winters, allowed the animals to forage regardless of season. Their presence left the national park reeling from a sharp decline in vegetation and other wildlife. Finally, in 2017, Parks Canada and the Haida Nation embarked on a mission to end the problem, and it may prove a model for other places across Canada where deer continue to plague ecosystems.

Judson Brown, a firearms instructor at the park and a member of the Haida Nation, was apprehensive about the project at first. “Shooting deer for the sake of shooting deer was a very hard concept to grasp at the beginning, because I’m a sustenance hunter,” he says. It was only after he visited a deer-free island that he understood. He noticed the moisture. He could smell the flowers and hear countless songbirds and buzzing insects. “It was more alive,” he recalls. “That really changed my perception and my belief in this project.”

Brown describes the islands that have deer as moss deserts. “There’s no understorey, there are no shrubs, because the deer eat it all away,” he says. So the excursions to eradicate deer started in March 2017, made up of the Kiwis along with Haida and non-Haida hunters from the park. Gwaii Haanas is reachable only by air or water, meaning the teams go in for several weeks at a time with little contact with the outside world.

RELATED: Will and Kate visit Haida Gwaii with anger in the air

At the outset, Brown found himself sitting motionless for up to 10 hours a day at bait stations of corn, cedar boughs and fresh apples, waiting to lure unsuspecting deer. “It wasn’t as glorifying as I first thought,” he admits. When the Kiwi hunters arrived, he transported them from their camps to various places on the islands by boat. “We were able to tell them about the behaviour of our deer and how they moved through the landscape,” he says. The Kiwis brought with them highly trained tracking dogs equipped with GPS trackers. From the boat, Brown watched on a monitor as the dogs and their masters rushed into the forest. The blips on the screen would meander at first, then continue in a straight line after the dogs caught a scent or heard a noise, their pace slowing when they got within range of a deer.

Chris Gill, the program director at Coastal Conservation, an organization that is also involved in the project, says the Kiwi hunters are sought after around the world. “New Zealand has been a leader in ungulate management for decades, particularly deer management on islands,” he explains. “It’s an extremely challenging process to undertake, even if you have the most skilled people. We wanted to maximize our chances of success.”

Last year, between March and October, the hunters put down 598 deer in Gwaii Haanas. They’ll keep going until fall 2019. Ernie Gladstone, a field unit superintendent at the park and a member of the Haida Nation, says the meat is distributed to local schools and community centres—“A big part of this was bringing the meat back”—while the hides and hooves have been used to make Indigenous regalia, he says.

READ MORE: What makes the Ice Age footprints found in B.C. so remarkable

The project, Gladstone says, has drawn interest from across Canada in areas where invasive animal species have run amok. Deer culls have run into opposition from residents and activists who say the animals get wounded and suffer. The Gwaii Haanas approach won’t please those who oppose all killing of animals. But proponents say it’s comparatively humane because the sharpshooters’ accuracy results in clean kills. Gladstone believes he and his team are becoming “world leaders in invasive species management.”

Before and after pictures of an area fenced off in 1998, meanwhile, show flourishing regrowth, which has spurred a sense of optimism. For Gladstone and Brown, after all, Gwaii Haanas is ultimately more than a park, and protecting it justifies their mission: “When you look back on things, we’re providing more habitat for more life,” Brown says. For them, it’s a place where their people are still allowed to forage for food and chop cedar for totem poles and canoes. “It’s a real privilege to be able to look after a place that’s so special to us,” says Gladstone. “It’s a place where our ancestors once lived.”