What makes immigrants financially successful in a new country 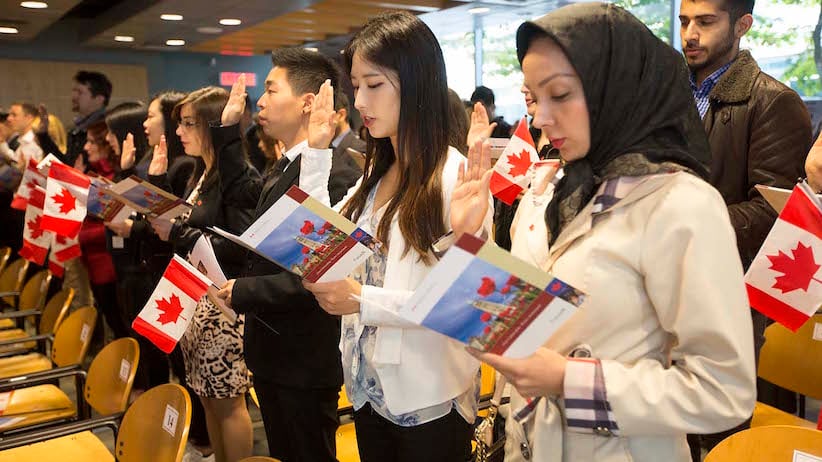 “It was tough in the beginning,” remembers Maramba. “We worked nights in a dingy Toronto food factory and the work was so monotonous we played stacking games with the boxes to keep ourselves motivated.”

Both Yap and Maramba were well educated and had attended university in Manila. But finding a job in Canada that suited their academic abilities and skills proved difficult so they came up with an idea to start their own advertising agency.

“We were riding the subway one morning and it hit us,” says Yap, who had been an ad executive back home in the Philippines. “The billboard ads in the subway cars weren’t speaking to the experiences of immigrants like us and the cultural references were over our heads. That’s when we decided we should launch a multicultural ad agency to cater to people just like us.”

After tapping family and friends for some start-up cash—and living as frugally as possible—the two started the ad agency, AV Communications in their small apartment in Toronto. “We’d walk to work to our three different part-time jobs to save money and even debated whether we really needed that Tim Horton’s coffee and often wouldn’t buy it,” says Maramba. “We watched our money and saved.”

It turns out that is exactly what others in their situation were doing as well. One of the key findings from a Canada Project poll is that 44 per cent of immigrants have access to over $10,000 in savings. That far exceeds the 27 per cent of multi-generationals who say they do—and that didn’t surprise the two women. “The anxiety and instability is always there for immigrants,” says Maramba. “So, having access to a chunk of funds that’s easy to access is a priority for us. It’s a ‘protection-from-instability fund’, a ‘just-in-case fund’ if we have to go home on short notice to see mom and dad, or help the family in other ways back home.”

Another key finding from the poll, a partnership led by Maclean’s and includes MoneySense, came when it asked the question: ‘For most transactions, how do you prefer to pay?’ In this case, 67 per cent of those who identified as immigrant respondents replied ‘credit’ whereas only 55 per cent of first generation Canadians did. “This can be explained by the immigrant’s desire to build a strong credit history,” notes Yap. “It’s almost as if we need to catch up with the local-born Canadians who have had their credit cards from the start.”

Many immigrants come from countries where the banking system is quite different from Canada’s. The importance placed on property ownership, both as a hold of value and as a status symbol, is amplified by Asian immigrants who are more likely to own their own home and have property investments—a key reason why as many as 81 per cent of immigrant poll respondents say they feel happily middle class.

Bernice Cheung, a Vice President of Cultural markets and Financial Services at Environics Research in Canada notes another reason for the financial success of immigrants. “Established immigrants, meaning those who have been here 11 years or more—often fare better than native born Canadians,” says Cheung.

Danie Vieira, a 40-year-old dental assistant in Toronto, agrees, explaining how her own desire to achieve a comfortable lifestyle and success were the driving forces behind her departure from her home country of Brazil 20 years ago. Vieira initially came to attend college and for the first few weeks stayed with a cousin before getting her own apartment. “I went to college by day and worked as a cleaner at night,” says Vieira. “I always felt safe. In Brazil, I never felt that way. I wanted something better for myself and my future.”

READ MORE: The changing face of Canadian immigration in one chart

After receiving her dental assistant’s diploma from George Brown College, Vieira went on to marry and have two children of her own, a son and daughter now ages 9 and 2. “I have a job I love and we own our own home,” says Vieira. “Now our goal is to save for our kids’ education. We do it all for them now so they can have a happy, rewarding life too.”

Certified financial planner Heather Franklin has seen the same disciplined approach to getting ahead amongst her own immigrant clients. “It’s important to them to do well, whereas for Canadians born here, it’s more about keeping up appearances and ‘keeping up with the Jones.’ Immigrants value hard work, a home and security—not all the bells and whistles.”

These days, immigrants have a lot of help getting them started in building wealth and financial success in their new country and most Canadian banks have newcomer packages. “Set up a chequing account in the first few weeks of your arrival,” advises Cheung to immigrant newcomers. “After all, before you can apply for a credit card, mortgage or personal loan, and before you can start building up your Canadian credit history, you need an account.” Often these newcomer banking packages mean they won’t charge monthly account fees for the first six-to-12 months and they’ll give immigrants discounts on other financial products like safety deposit boxes or auto insurance.

Maramba found it helpful, too, to make full use of online banking. “It’s so easy now,” says Maramba. “There are apps to monitor what you spend, how your investments are doing, your credit card spend, and so on. They’re great tools if you are even a bit financially savvy.”

As well, Newcomers should consider attending seminars hosted by banks on taxation, credit cards, Tax-Free Savings Accounts (TFSAs), Registered Retirement Savings Plans (RRSPs) as well as other tax deferring vehicles. “It’s also helpful to have a financial advisor set up a financial plan, starting with learning to use a TFSA,” says Cheung. Maramba agrees, adding that she found it beneficial to visit a fee-for-service financial advisor who gave good financial advice and didn’t simply take her money for selling her investments.

In the bigger economic picture, Canadians should be very happy with social policy issues that see Canada welcoming about 300,000 immigrants a year. “Without immigration there is no growth,” says Cheung. “Without immigrants, Canadians will become a rapidly aging country, and the economy will decline. A healthy immigration policy is key to a healthy economy and more prosperity for everyone.”

Maramba and Yap of AV Communications are a clear example of that. After taking several small advertising jobs decorating bank lobbies and making business cards, the two met someone at Western Union who was looking to market to ethnic communities and he became their first client. Today, the two women have a healthy list of high-profile clients, including the Ontario government. And after working full-out at as many as three jobs each for several years, they’re both looking forward to slowing down and retiring in a few years. “We’d love to have time off and do more travelling,” says Maramba. “That’s what I’m looking forward to.”

And as for some final inspirational thoughts and words of wisdom on the immigrant experience, Maramba doesn’t hesitate to add, “We jumped into the unknown in the hopes for a better, more successful life. Locally born Canadians may take jobs, homes, cars and a good education for granted because they have never had to experience being without these things. So, the motivation to be successful may not play such a central role in their lives. After all, they are used to the comfort that all immigrants diligently seek out. But believe me, we are very thankful for the opportunity to live life to the fullest.”