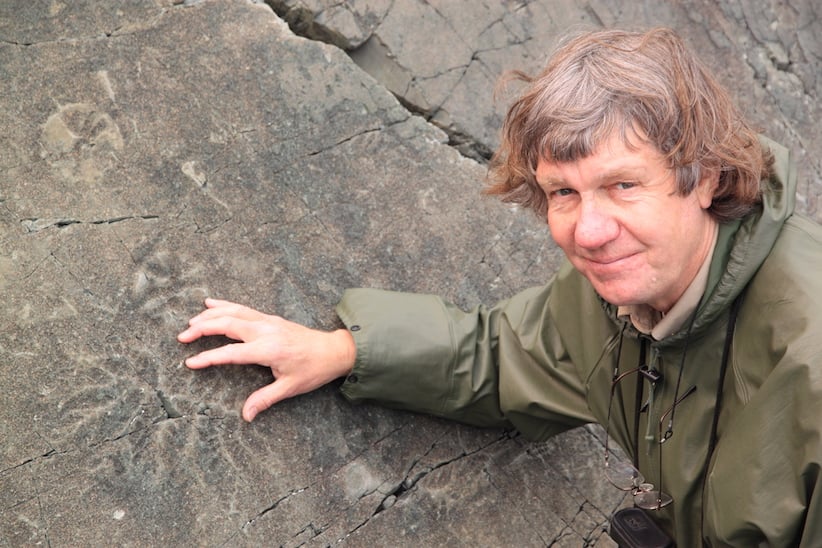 Richard Thomas, who’s leading efforts to have the Mistaken Point Ecological Reserve in southeastern N.L. named a UNESCO world heritage site examines outlines of fossils that have been scientifically dated back 565 million years in this handout photo on July 16, 2013. THE CANADIAN PRESS/HO, Mike Wert

MISTAKEN POINT, N.L. – A rocky stretch of coastline along the southeastern tip of Newfoundland that holds secrets about the origins of complex life has been declared a world heritage site by the United Nations Organization for Education, Science and Culture.

Mistaken Point, so-named for its frequent disorienting fog, is home to the oldest-known evidence of early multicellular creatures.

The 565-million-year-old sea floor is embedded with the remains of ancient fossils, slowly exposed by the pounding Atlantic surf. Preserved in time by repeated volcanic ash-falls, the fossils include some of the earliest animal-like creatures ever discovered — a rare glimpse into what it was like “when life got big.”

The decision was announced in Istanbul after a hurried review by the UNESCO World Heritage Committee on Sunday. The annual meeting had been cut short by a coup attempt in Turkey less than 48 hours earlier, forcing the committee to fast-track its agenda.

More than 6,200 kilometres away, a small crowd gathered in the Edge of Avalon interpretive centre in Portugal Cove South, N.L. to watch a live online feed of the proceedings.

“Everybody was going crackers,” Richard Thomas, a geologist who led the province’s years-long effort. “I was just sitting there dazed … I thought this day would never come.”

The rural fishing town, around a two-hour drive south of St. John’s, erupted in celebration, car horns blaring in a motorcade with blue-and-white balloons in honour of the United Nations’ official colours.

“Our province’s natural heritage is recognized today on the international stage,” Environment Minister Perry Trimper said in a statement.

Of 1000-plus world heritage sites around the world, there are now 18 in Canada. This will be the fourth in Newfoundland and Labrador and the first to be managed by the province.

UNESCO’s website says the prestige of being declared a world heritage site often raises awareness of the importance of preservation and a country may also get financial assistance and expert advice from the World Heritage Committee to support preservation.

Another Canadian bid seeking UNESCO World Heritage Site status for Pimachiowin Aki, a large swath of boreal forest along the Manitoba-Ontario border, remains in limbo after the Pikangikum First Nation withdrew its support for the project over concerns about some Unesco reports of the area.

“We are all very disappointed that we encountered these challenges at such a critical time in the nomination process, after working on this project for 12 years,” William Young of the Pimachiowin Aki Corporation said in a statement. “We felt that we had no option but to seek a referral to give us all a chance to regroup and consider potential options.”