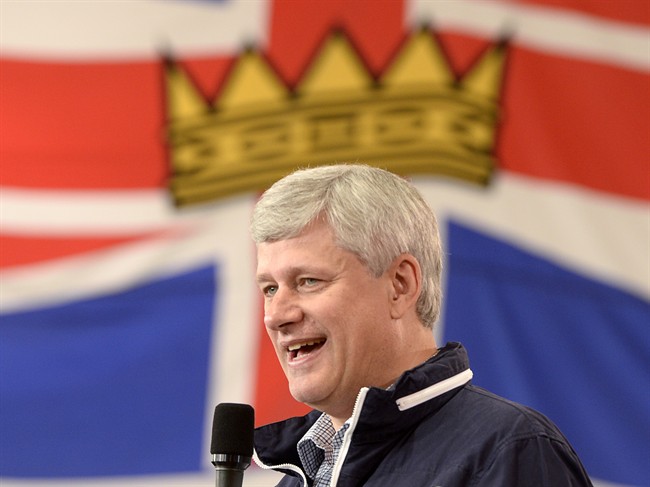 OTTAWA – Hard new numbers about the past performance of Canada’s economy gave way to crystal ball-gazing Monday on the campaign trail as the major party leaders all took a shot at forecasting the future.

For Stephen Harper, weeks of buffeting bad news was washed away by a report tallying the final budget bottom line for the last fiscal year: a surprise $1.9 billion surplus.

The timing of the 2014-15 surplus announcement from Finance Canada — the first after six consecutive budget deficits — couldn’t be better for Harper, with the Conservative, NDP and Liberal leaders set to face off later this week in a Calgary election debate on the economy.

The shot of fiscal adrenaline had the prime minister in fine fettle at a Kamloops, B.C., campaign stop, where he brushed off the mild economic contraction that marked the first half of 2015 and asserted that robust growth and good budgetary times are ahead.

“I see zero to little risk that we will have anything other than a surplus for the second year in a row, based on the trajectory we are on,” said Harper.

Across the country in Toronto, Liberal Leader Justin Trudeau was looking at the same numbers and reaching a very different conclusion.

“We are in deficit right now,” Trudeau asserted.

“Mr. Harper has put us in deficit this year. As for last year’s numbers, we know and we saw Mr. Harper under spending and making cuts to Veterans Affairs, to Aboriginal Affairs, to seniors in the billions of dollars so that he could balance the books in time for his election.”

NDP Leader Tom Mulcair, meanwhile, called the 2014-15 surplus “good news for Canadians and it shows that the NDP’s going to be starting off on the right foot by proposing to have a balanced budget, talking to Canadians about what we can accomplish together in health care (and) quality, affordable $15-a day child care.”

Harper was spectacularly wrong in October 2008 with his election campaign prediction that if Canada was going to suffer a recession, it would have happened by then. He also vowed not to run deficits.

As it turned out, a devastating global economic meltdown was already underway and the Conservatives were already in deficit en route to a $55.6-billion shortfall in 2009-10 that was the largest in Canadian history.

On the other side of the ledger, Liberals and New Democrats have been loudly denouncing “eight straight” deficits from the Conservatives during this election campaign, only to find the streak suddenly stalled at six.

Public opinion polls continue to have the three major parties effectively locked in a three-way tie for voters’ affections past the mid-point of the extraordinarily long 78-day election campaign.

Economic stewardship and national security are the Conservatives’ preferred ballot questions, and getting the some good news ahead of Thursday’s economic debate by the leaders clearly energized the campaigning prime minister Monday.

But the glass half-full or half-empty arguments will likely continue until voting day and beyond.

Trudeau, for his part, isn’t buying Conservative claims that the country’s economy has turned the corner. Harper has claimed that a $5 billion surplus in government accounts through the first three months of 2015-16 is proof this year will end in the black, however Finance officials continually caution that monthly tallies in the “fiscal monitor” are not predictive of the year-end accounting.

Monday’s report on the final 2014-15 accounting also show the government under spent on direct program expenses by $1.5 billion last year — lapsed funds that opposition parties say were budgeted for everything from veterans services to transportation safety and services for the disabled.