Newsmaker: #lostbear looks for his owner 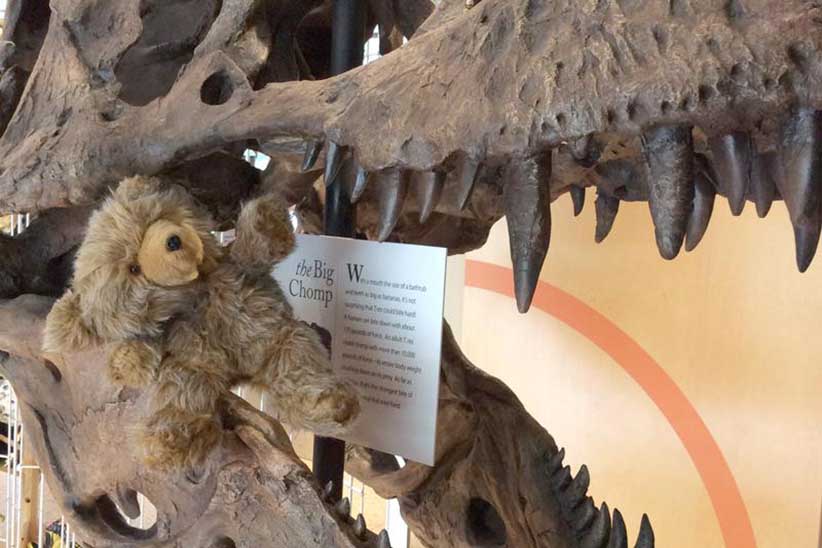 His black button nose is surrounded by a tan muzzle, which is surrounded by fuzzy, light-brown fur, which is surrounded by global media buzz. To some four-year-old boy, he is a beloved companion who offered plush security when a robotic Tyrannosaurus rex gave a toothy roar. He’s simply known as the adventure-loving #lostbear to staff at the Royal Saskatchewan Museum, as well as web readers of the Daily Mail, the Today Show, BuzzFeed and other outlets that attempted to reunite bear with boy and recount this aww-geez story.

It started in late June, when the teddy and his owner visited the Regina attraction and encountered Megamunch, the museum’s famous robot dinosaur. A museum employee tried to calm the scared child, saying he’d be safe with his stuffed bear. Later that day, staff were disappointed to find the stuffie in the centre’s lost and found, after it was recovered from a washroom.

“Most times, when kids bring their friend in, they have a pretty good grasp on them,” says Sarah Schafer, the Royal Saskatchewan’s visitor-experience supervisor. “We were pretty sure that he was special to someone, and we wanted to make sure he found his family again.” Schafer and staff decided to adopt an idea they’d seen before, including when a stuffed bunny turned up at the Nova Scotia Museum. They’d send pictures to Twitter, where perhaps a loyal Regina museum-goer who was one of the museum’s 3,900 followers would spot the toy. Jenna Cannon, a university student and museum interpreter, got creative, posting one image a day with the bear at different exhibits: in the jaws of a skeletal tylosaurus, in the First Nations gallery, and with much larger bears stuffed by taxidermists.

After a week of tweets, the Regina Leader-Post did a story and, from there, it spread to international websites. “A boy left his teddy bear in a museum,” said a headline on the Washington Post’s “Morning Mix.” “Can the Internet bring them back together?” The answer, three weeks later, remained “no.” But the search efforts have brought attention to a venerable Prairie museum that isn’t exactly getting overseas media phone inquiries about its long-running play about Louis Riel. Some museum visitors have come in to meet the lost bear, Schafer says.“He’s been a little bit of a celebrity unto himself.”

Museum officials swear up and down this is no marketing ploy. But it is click-friendly fodder for media websites, which, in this case, redefined viral. None of the museum’s posts had more than 41 retweets; it was traditional media that made this an infectiously cute tale of loss and adventure, but—as of mid-July—no redemption.