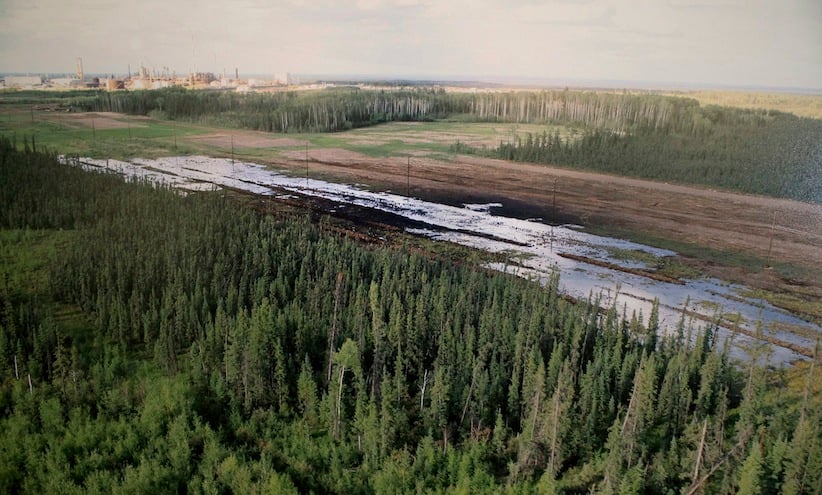 A Nexen-supplied image of a pipeline oil spill near the Long Lake oil sands operation is shown at a press conference in Calgary, Alta., Friday, July 17, 2015. (Larry MacDougal/CP)

ANZAC, Alta. – Nexen Energy said Wednesday it can narrow down when a pipeline ruptured in northern Alberta to a two-week period, something that one environmental group said is cause for alarm.

But Bailey said the company believes the leak began some time between June 29, when crews finished a cleaning, and July 15, when a contractor discovered it near Nexen Energy’s Long Lake oilsands facility.

Mike Hudema of Greenpeace Canada’s climate and energy team said it is stunning that the spill may have gone undetected for as long as that.

“It’s shocking to learn that the pipeline may have been spilling for two weeks before it was discovered — and even then, only by accident,” said Hudema in a statement.

“Warning bells should be going off for Canada’s premiers right now about the dangers they are bringing to their communities if new pipelines are built because that’s what they’re calling for with the Canadian Energy Strategy.”

Nexen Energy hosted a tour for news media Wednesday of the site of the spill, which left 16,000 square metres of muskeg slathered in bitumen, sand and produced water. The site has been fenced off as cleanup efforts continue and plastic eagles have been set up to deter wildlife from the area.

On Sunday, a dead duck was found at the spill site, but the company said it believes the animal died before it put the fences, wildlife cannons and other deterrents in place in an effort to limit further environmental harm.

“It’s disheartening to see the site and it’s disappointing that this has happened,” Nexen Energy CEO Fang Zhi said after hosting the media tour. “I therefore personally apologize for the consequences this might have caused.”

The pipeline was installed last year and a warning system didn’t detect the leak. The company is investigating.

“Our focus as of now is ensuring the safety of our workers on the site, minimizing whatever impact on the environment and on the wildlife, as well as understanding the root causes of this incident through investigations,” Zhi said.

The double-walled pipeline is designed to take raw bitumen from the ground to the Long Lake processing plant. The pipeline operated at 100 degrees Celsius to keep the thick bitumen it carried fluid.

Colin Woods, a manager of enforcement and surveillance at the Alberta Energy Regulator who was at the site, said the pipeline design is fairly new.

Bailey said it will take months before the company can determine what caused the leak. He said the outer section of the pipe had a smaller hole than originally thought, but the company has not been able to look at the inner pipe.

Bailey said he also doesn’t know how long the cleanup will take since their long-term remediation still has to be approved by the Alberta Energy Regulator. About 130 workers are on site, working to contain and vacuum the spill.