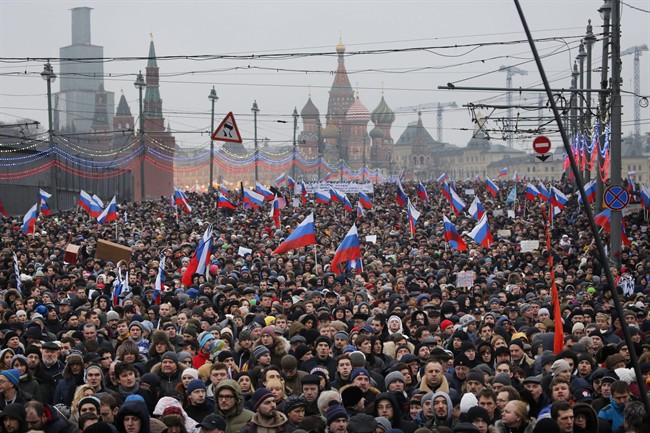 OTTAWA – Canada stands with the tens of thousands of Russians who took to Moscow streets on Sunday to protest the killing of opposition politician Boris Nemtsov, Foreign Affairs Minister Rob Nicholson says.

Speaking on the eve of his first foreign trip in his new portfolio, Nicholson said Sunday he doesn’t know who is to blame for Friday’s shooting of Nemtsov, one of the most vocal political opponents of President Vladimir Putin.

But Sunday’s protest march and outpouring of support for Nemtsov shows Russians are concerned about what Putin is doing to their country, he said.

“I understand and support those who are taking to the street,” the minister told The Canadian Press in his first print interview since replacing John Baird last month.

“They saw progress after the end of communism, and now I’m sure that many of them are very worried about what Putin is doing.”

Along with the fight against Islamic State militants in Iraq and Syria, the ongoing tension in Ukraine tops the agenda when Nicholson arrives in Paris on Monday for talks with his French counterpart, Laurent Fabius.

Nicholson said he’s looking forward to a first-hand analysis from Fabius of the Minsk II peace agreement that France recently took part in with Germany, Russia and Ukraine. The agreement calls for the withdrawal of all armed forces from Ukraine, a clause many see as aimed at Russia, which is accused of backing separatists there.

Nicholson acknowledged the fragility of the ceasefire, which was shaken Friday by the deaths of three Ukrainian soldiers.

“Certainly with the killing of Boris Nemtsov here in the last couple of days underlines how difficult and how tragic the circumstances are,” said Nicholson. “I’m interested to get his (Fabius’s) take on this.”

Before he was gunned down, Nemtsov had organized Sunday’s demonstration in Moscow as a peace march against the war in Ukraine.

Nemtsov was shot to death near the Kremlin just hours after he gave a radio interview during which he accused Putin of a “mad, aggressive and deadly policy” in the war against Ukraine.

He was working on a report that was trying to link Russian soldiers with the Ukraine separatist fighters.

Under drizzly skies, marchers chanted “Russia without Putin” and “Say no to war,” the Associated Press reported.

“I’m hoping that a thorough investigation will uncover exactly who is behind this,” Nicholson said.

“He was a tireless advocate of democracy, human rights and the rule of law. He was unafraid to speak his mind. This is very much a tragedy,” the minister added.

“This is a setback, of course, for people who want to see the rule of law and democracy come to Russia.”

Also on Monday, Nicholson will visit the Grand Synagogue of Paris as a deliberate statement against anti-Semitism. The gesture comes following the January attacks on the Charlie Hebdo newspaper and a kosher supermarket in France, and last week’s shootings of two people in Denmark — including a Jewish man outside a synagogue.

“We are strong supporters of religious freedom and we’ll continue to stand up for religious minorities who are under threat and we will advocate on their behalf,” he said.

Nicholson also welcomed Sunday’s release of 19 Christian Assyrians, who were among the 220 people taken captive last week by Islamic militants in northern Syria.

He called that “a step in the right direction but we want to see more.”

Nicholson moved over from the defence portfolio in a mini cabinet shuffle after Baird’s sudden departure after almost four years at foreign affairs. Baird had been the longest serving minister at that post in the Harper government.

Nicholson said the ongoing fight against terrorism and the continuing need to support Ukraine in the face of Russian aggression would be his top priorities in the months ahead before an expected October federal election.

“I had those issues as defence minister and that will certainly continue as foreign affairs minister.”

Nicholson’s appointment sparked criticism because he is not bilingual.

The minister said he chose France as his first trip as Canada’s top diplomat because the two countries “have been bound together” by their “cultural roots, our rich history, and our shared values.”