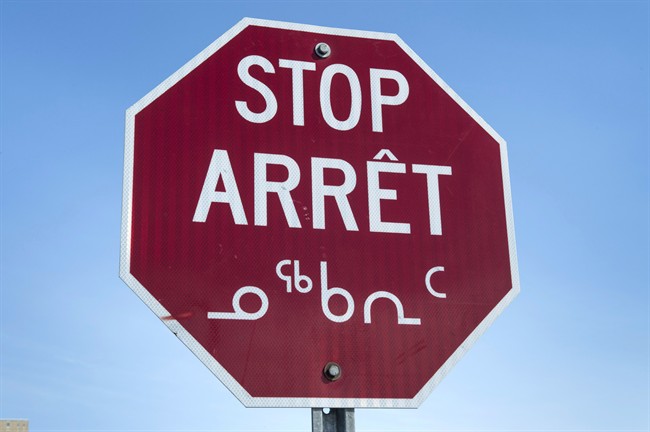 A stop sign in English, French and Inuit is seen Saturday, April 25, 2015 in Iqaluit, Nunavut. Experts are meeting in Iqaluit to try to get Inuit people speaking the same language. (Paul Chiasson/CP)

Two Inuit go hunting. One hands the other his rifle and the recipient says “ma’na.”

His partner, though, has no idea what he’s just heard. The word for thanks in his dialect is “qujannamiik.”

There are only 60,000 Inuit in Canada, but they are divided between nine different writing forms and at least that many dialects. On Friday, language experts are to meet in Ottawa to help bridge that gulf.

“People can generally understand each other, but there are serious limitations for that understanding,” said Natan Obed, head of Inuit Tapiriit Kanatami, Canada’s national Inuit group.

“If we had one unified writing system, we could maximize the ability for us to read in our language and also educate our children and provide them with learning resources.”

Inuktitut fractured because it was spoken by widely dispersed groups who rarely interacted. The language splintered further when missionaries developed writing for it.

Syllabics, originally based on characters from Pitman shorthand, are most common in the Eastern Arctic. Roman orthography, the letters of the alphabet most of us recognize, is mostly used in the west.

The dialects have diverged so widely that some use sounds that speakers from other parts of the North can’t even pronounce. Obed’s group produces a magazine called Inuktitut that native speakers in the far west and the far east just can’t read.

The drive to establish a standard writing form dates back to a recommendation in a 2011 report on Inuit education. Last September, experts from the four major Inuit regions began that task and continue their work on Friday.

Many argue orthography is the way to go. It’s in common use everywhere — especially on social media and the Internet, both widely used by Inuit.

Last week, Inuktitut interpreters and translators voted at a conference in Iqaluit in favour of moving to orthography.

But many don’t want to say goodbye to the triangles, circles and squiggles of syllabics. The debate gets more heated because the areas where Inuktitut is strongest — almost all Quebec Inuit say they’re fluent — are the same areas that use syllabics.

“There are more Inuit talking seriously about transitioning out of syllabics into orthography,” Obed said. “(But) it is very contentious because it gets to the heart of who people are and how they’ve learned and express themselves.

“People have equated linguistic preservation and use to syllabics,” Obed said. “Syllabics attachment is based on the overarching history and the fact that syllabics allowed people to retain their language and their culture at a time of colonization and great upheaval.”

There is no central language authority across all four Inuit regions. Implementing any recommendations from the standardization report will be up to the regional land-claim groups.

Coming together would have economic and cultural benefits, said Obed. It would draw Inuit together and make developing curriculum materials for schools easier and cheaper.

“The Roman orthography side says, ‘Look at the practicality of what orthography could do to unlock the learning potential, to reduce costs, to ensure in this digital age that we don’t have to get through another set of barriers to express ourselves.”

The experts meeting this weekend have until early next year to complete their work.