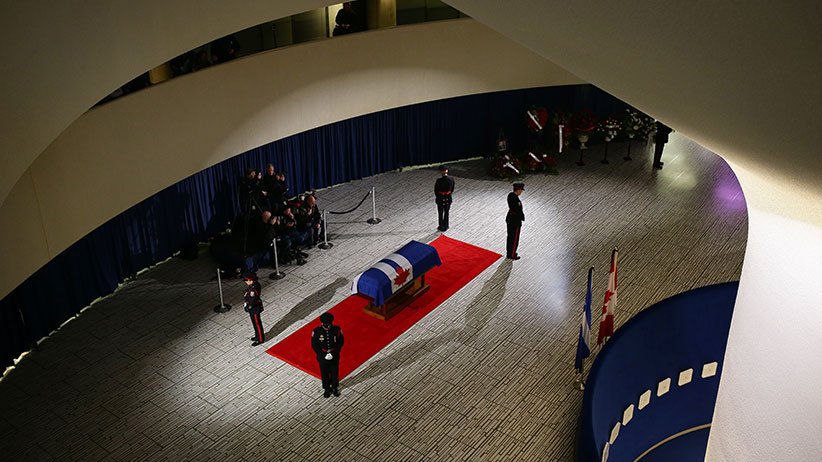 Torontonians line up to pay respects to former mayor Rob Ford, lying in repose in City Hall.(Photograph by Cole Garside)

Mourners will have one last chance to say goodbye to former Toronto mayor Rob Ford today. His casket will be taken in a procession from city hall to St. James cathedral downtown for a funeral service. Ford died from cancer last week at the age of 46.

Investigators will today begin looking for the cause of a plane crash in Quebec that claimed the lives of seven people, including former federal Liberal cabinet minister Jean Lapierre. Lapierre, his wife, three of his siblings, and two pilots were killed when their twin-engine plane crashed on Iles-de-la-Madeleine, Quebec in the Gulf of St. Lawrence. They were on their way to attend their father’s funeral.

Federal cabinet ministers, including Prime Minister Justin Trudeau, continue to pitch the virtues of their first Liberal budget across Canada this week. With Trudeau in Edmonton today talking up the spending plan his government released last week, one thing noticeably absent from the annual post-budget sales job is a government advertising blitz.

Lululemon Athletica Inc. (LULU) reported fiscal fourth-quarter net income of $117.4 million. On a per-share basis, the Vancouver-based company said it had net income of 85 cents. The results beat Wall Street expectations. The average estimate of 17 analysts surveyed by Zacks Investment Research was for earnings of 80 cents per share.

The athletic apparel maker posted revenue of $704.3 million in the period, also surpassing Street forecasts. Twelve analysts surveyed by Zacks expected $692.2 million. For the year, the company reported profit of $266 million, or $1.89 per share. Revenue was reported as $2.06 billion.

For the current quarter ending in May, Lululemon said it expects revenue in the range of $483 million to $488 million. Analysts surveyed by Zacks had expected revenue of $487.1 million. The company expects full-year earnings to be $2.05 to $2.15 per share, with revenue ranging from $2.29 billion to $2.34 billion. Lululemon shares have climbed 17 per cent since the beginning of the year. The stock has decreased 5.5 per cent in the past 12 months.

Accounting giant KPMG says Canada has proven to be second most competitive market in a comparison test of 10 leading industrial countries. In its report, KPMG says Canada lags only behind Mexico when it comes to how little businesses have to pay for labour, facilities, transportation and taxes.

Consumer complaints about TV services to the country’s telecom watchdog outnumbered issues with their cellphones, land lines and Internet providers, according to its mid-year report. The Commissioner for Complaints for Telecommunications Services (CCTS) says it received 4,651 complaints about broadcasting services between Aug. 1, 2015 and Jan. 31, 2016.

The long-held vision of giant airships nearly the length of a Canadian football field delivering workers and supplies to the oilsands and the North’s mining sector is a step closer to reality. U.S.-based Lockheed Martin has announced it has a letter of intent to sell 12 hybrid airships to Straightline Aviation of the United Kingdom.

Finance Minister Bill Morneau will speak at a New York luncheon hosted by the Canadian Association of New York.