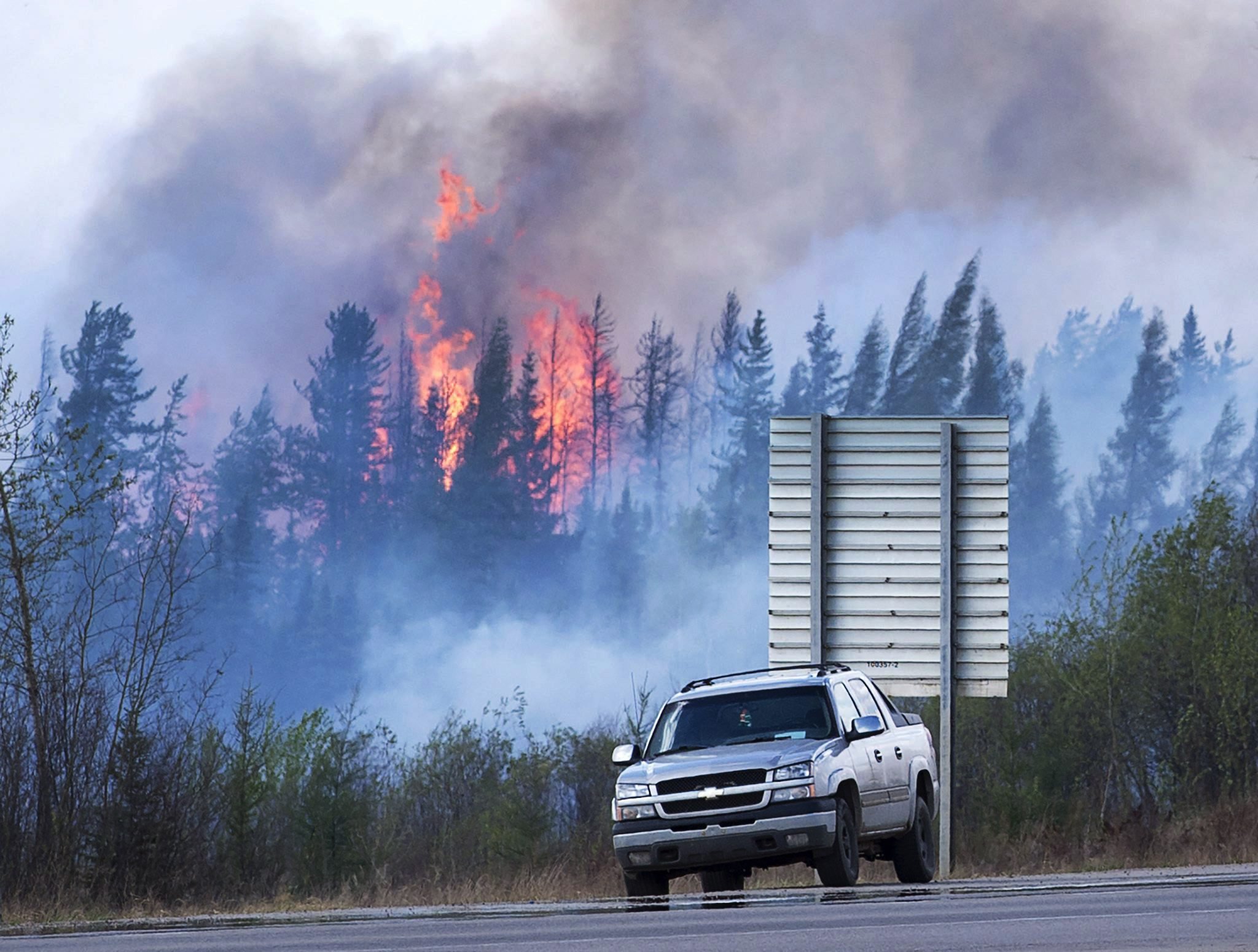 Flames flare up from hotspots from a wildfire along a highway to Fort McMurray, Alberta, Canada, Sunday, May 8, 2016.  (Ryan Remiorz/The Canadian Press via AP)

Alberta Premier Rachel Notley says the “ocean of fire” that hit Fort McMurray burned about 10 per cent of the buildings, but the hard work of firefighters saved the bulk of the city so it can be rebuilt. But as for the 80,000 residents who were ordered out of the Alberta city a week ago today, Notley said they’d have to wait at least two weeks to hear when they might be allowed to return.

Fire chief Darby Allen took reporters on a bus tour of Fort McMurray yesterday and they saw areas sapped of colour — all charred black, ashy white and sickly beige. Zoom in and everyday objects become discernible amid the rubble — the lopsided frame of a swingset, a barbecue, a wire cage for a pet. Up to 90 per cent of the city was saved in the end — 2,400 structures damaged and 25,000 still standing.

SOURCE: GHOMESHI CHARGE TO BE WITHDRAWN FOR PEACE BOND

A sexual assault charge laid against former CBC radio star Jian Ghomeshi is expected to be withdrawn Wednesday, a source has told The Canadian Press. In exchange, Ghomeshi will first have to sign a peace bond. The source, who spoke on condition of anonymity, confirmed the arrangement means Ghomeshi won’t have to face a trial that had been scheduled to start on June 6.

Technology firms have turned several industries on their head. The way people buy books, hail a ride home from the bar or find a room for the night while on vacation have all changed. And now financial technology or fintech firms are turning their sights on the banking industry, but Canada’s big banks aren’t going to give up their dominant position without a fight.

A former high-ranking Pakistani politician with Canadian citizenship is being held in Karachi on trumped-up political charges, supporters say. Dr. Asim Hussain, an orthopedic surgeon with family and property ties in London, Ont., was arrested in late August by paramilitary Pakistan Rangers for allegedly financing terrorism through his hospital.

Groups and individuals opposed to Energy East will hold a news conference in Montreal.

Statistics Canada will release the capital and repair expenditures survey.