In the news today: Cyberattack warnings, concerns about anti-terror legislation, a PBO report 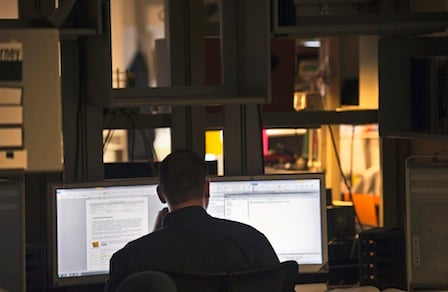 A ‘LOUD ALARM’ ABOUT CYBERATTACKS

Last week’s fatal police shooting in Dawson Creek, B.C., of a masked man associated with the international hackers’ group Anonymous has set the stage for an unprecedented escalation in online attacks across Canada, says a technology expert. Carmi Levy said this incident should be “sounding a very loud alarm” for the Canadian government that he says is failing to take cyber security seriously.

The RCMP is concerned that new anti-terrorism legislation might hurt — not help — its security efforts in overseas hotspots, internal notes say. The Mounties worry the Canadian Security Intelligence Service’s new powers to disrupt threats “could inadvertently jeopardize existing relationships” the Mounties have fostered, if authorities discover what CSIS is doing, the RCMP briefing notes warn.

NDP Leader Tom Mulcair was on the defensive Monday over his party’s policy on Quebec secession as he began an eight-day pre-election tour of Ontario. He defended his position that a bare majority of 50 per cent plus one vote should be sufficient to trigger negotiations on Quebec’s separation from Canada.

B.C. FIRST NATION TO BE TRAINED ON CLEARING BOMBS

Members of British Columbia’s Okanagan Indian Band will be trained in Texas on how to rid their reserve of buried bullets and bombs that have accumulated over a century. Military training dating to the Boer War has littered ordinance across thousands of hectares of the First Nation’s land near Vernon, B.C. One band member has already gone to Texas, three more will follow in September, and six more will go over the next two years.

The Parliamentary Budget Officer will release a report that assesses the long-term sustainability of government finances for three government sub-sectors.

Codey Reginald Hennigar appears in court in Dartmouth, N.S., to set a date for a preliminary inquiry. He is accused of second-degree murder in deaths of three people found dead after house fire in Wyse’s Corner.