Anne Kingston: The letter from the former cabinet minister is a masterclass in how to communicate volumes between the lines 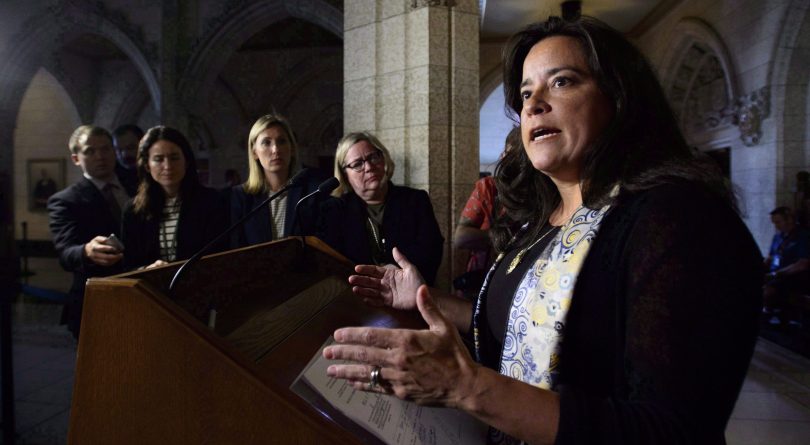 Former justice minister Jody Wilson-Raybould makes an announcement regarding family law on Parliament Hill in Ottawa on May 22, 2018. (THE CANADIAN PRESS/Sean Kilpatrick)

Jody Wilson-Raybould’s resignation letter made public on Tuesday offers a masterclass in how to communicate volumes between the lines.

1. Its undermining timing: The former Minister of Veterans Affairs and Associate Minister of National Defence submitted her resignation to Prime Minister Justin Trudeau on Monday night, hours after he  spoke publicly for his cabinet minister, who was not present, in Vancouver. “In our system of government, her presence in cabinet should actually speak for itself,” Trudeau boasted then. Now, Wilson-Raybould’s resignation from cabinet is doing the talking.

2. Who is thanked:  “[A]ll Canadians, and in particular the residents of Vancouver-Granville, who put their trust in me and supported me,” along with officials and her staff.

3. Who is not thanked: The Prime Minister.

4. Who is honoured: Canadian veterans and their families. Wilson-Raybould has “the deepest admiration and respect” for them, she writes, adding that her decision to resign from the portfolio she was moved to in January has nothing to do with them: “I only wish that I could have served you longer,” she said, a line recognizing the importance of the ministry and suggesting she is stepping down due to circumstances beyond her control.

5. Omission destined to spark speculation: No reason is given for her resignation, not even the cliched: “To spend more time with my family.”

6. Covert slam of Real Change™: “When I sought federal elected office, it was with the goal of implementing a positive and progressive vision of change on behalf of all Canadians and a different way of doing politics,” Wilson-Raybould writes. Her commitment to “fundamental change” hasn’t changed: “This work must and will carry on.” (Left unsaid: But not in the Trudeau cabinet.)

7. She knows a heavy-hitter lawyer is needed, and has retained one: The former Crown prosecutor named her counsel, the Honorable Thomas Albert Cromwell, CC, a former Puisne Justice on the Supreme Court of Canada. Like her, he’s Vancouver-Ottawa-based. In a nice irony, he’s also a “mentor” at the Trudeau Foundation.

8. Homage paid to her Indigenous roots, a reminder of the central role she formerly played within the government: Wilson-Raybould also signed the letter “Puglaas,” her name in Kwak’wala, the language of the First Nations who live at the north end of Vancouver Island, as well as her Twitter handle. It translates: “woman born of noble people.”  Wilson-Raybould’s appointment as Justice Minister heralded great hope of change; she was at the forefront of the government’s promise to rebuild relationships with Indigenous peoples. Then she was demoted, and now, it appears, had no choice but to leave cabinet for still unknown reasons.

9. Wilson-Raybould’s unifying rallying cry for the future intimates one is needed: “Regardless of background, geography, or party affiliation, we must stand together for the values that Canada is built on, and which are the foundation for our future,” she wrote. Left unsaid, but very clear, is the impression that Jody Wilson-Raybould has every intention of helping to build that foundation.