No extra credit for criminals 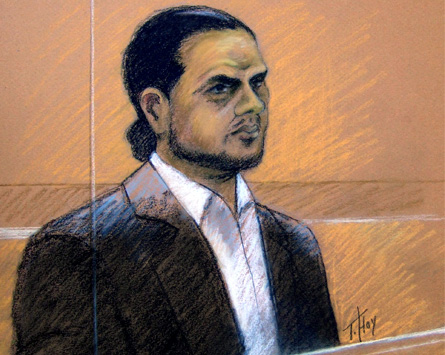 A court sketch of Momin Khawaja

Momin Khawaja, the Ottawa man who built a remote-controlled detonator for aspiring terrorists in the UK was sentenced yesterday to 10 ½ years in prison. Describing the 29-year-old software developer as “a willing and eager participant” in “violent jihad,” Justice Douglas Rutherford of the Ontario Superior Court decided that a decade-long sentence sends a clear message to anyone who might follow a similar path. “Sentencing in cases of terrorist activity must strongly repudiate activity that undermines our core values,” the judge told a packed courtroom. “Canada must certainly not accept the exportation of terrorism from within its borders to victimize innocent people in other parts of the world.”

Though aimed directly at Khawaja, Rutherford’s much-anticipated ruling also sends a strong message to every accused criminal awaiting trial at this very moment: it’s no longer guaranteed that time spent in remand will dramatically reduce your sentence. So if you’re planning to delay your day in court in the hopes of getting a lighter sentence down the road, think again.

Instead of granting Khawaja the standard “double time credit” for the nearly five years he spent in pre-trial custody—a regular practice that would have shaved 10 years off his sentence—Rutherford broke with conventional legal wisdom and refused to apply a “mechanical cookie-cutting process” to such a historic case. He agreed that Khawaja deserved some credit for his pre-trial custody, which was spent “in a detention centre that is not suited for long-term imprisonment.” But the judge declined to specify “a precise or particular arithmetic formula”—except to say that the convicted terrorist clearly does not deserve a ten-year credit for just five years behind bars. “Such a large block of credit cannot but invite public suspicion, even if unfairly, that the sentencing is being manipulated by delay in going to trial, with the result that public confidence in the proper administration of criminal justice is likely to be eroded.”

Rutherford was careful to point out that Khawaja and his lawyer, Lawrence Greenspon, did nothing to improperly delay the proceedings. The case took so many years to reach trial, he said, because it was complex and unprecedented, not because the defence tried to postpone a conviction in the hopes of securing a shorter sentence. In fact, Khawaja’s legal team actually sped up the process—and saved taxpayer dollars—by conceding much of the Crown’s facts.

But in countless other cases, the question still looms: Are defence lawyers filing frivolous motions and requesting repeated recesses because they want to maximize their clients’ two-for-one credit?

It’s a tempting tactic, to be sure. Last month, a Vancouver judge sentenced three men to eight, 12 and 13 years in prison for the eight-day kidnapping of Graham McMynn. Each, however, had nearly six years knocked off his sentence. In December, Toronto’s Andrew Harris—found guilty of manslaughter in what the Crown called a deliberate hit-and-run—walked free when Brampton judge Francine Van Melle awarded him slightly more than double-credit for the so-called “dead” time he served in remand.

That’s “fundamentally wrong,” says B.C. Attorney General Wally Oppal. Two weeks ago, amidst Metro Vancouver’s unprecedented gang war, he and Solicitor General John van Dongen flew to Ottawa to lobby the federal government to eradicate the two-for-one credit, which, Van Dongen says, “puts the justice system into disrepute.” They contend that criminals, well aware of the loophole, are deliberately obstructing the progress of their own trials to reduce the amount of time they ultimately spend behind bars. (Oppal says the federal government is on-board with the proposed change, noting that the Liberals, NDP and Bloc have each agreed to it, “in principle.”)

The Criminal Code provides for such sentence reductions because remand facilities are often crowded, and lack counseling, addictions-treatment and education programs typically found in prisons, says David Deutscher, who teaches criminal law at the University of Manitoba. “It’s five times worse than being in a prison,” adds noted criminal lawyer Eddie Greenspan. “It’s loud. You sit in a cell all day—you may get out for a half hour.” Although appellate courts have directed judges not to automatically grant the credit, the practice is routine. Some judges have even begun sentencing at a three-for-one ratio if evidence suggests conditions are unsanitary or unduly crowded. (Triple credits are most commonly granted to those housed at Toronto’s notorious Don Jail.)

The trio sentenced in the McMynn kidnapping last month were convicted in October and were originally supposed to have been sentenced in December. That hearing, however, was adjourned shortly after it began. The lawyer for Jose Hernandez received the last-minute adjournment so her client, who allegedly threatened McMynn with rape, dismemberment and death, could seek a psychiatric evaluation—funding for which had just been found, the lawyer said. McMynn’s father, however, worried that the reprieve was a deliberate ploy to rack up “double time,” which, effectively knocked an additional six months off their sentences.

Harris, found guilty in a notorious Toronto-area hit-and-run, decided to hang onto his lawyer, even though her bizarre conduct twice resulted in a mistrial. At both trials, Karen Cosgrove appeared impaired. Justice Van Melle went so far as to stop the second trial, temporarily dismiss the jury, and urge Harris to seek a different lawyer. (Cosgrove has since sought alcohol treatment couselling and her practice remains “restricted” by the Law Society of Upper Canada.)

Oppal, who was an appeal’s court judge before entering politics in 2005, says he routinely saw inmates who didn’t even apply for bail in the hopes of eating away at their eventual sentences. If you’re guilty, he says, there is little incentive to resolve trials quickly. Ottawa police chief Vern White concurs. At the Ottawa-Carleton Detention Centre, prisoners “openly” describe the foot-dragging and courtroom games they play to shorten sentences; the resulting backlogs are grinding the system to a “standstill” and causing overcrowding at remand facilities across the country, White says. Stall tactics include last-minute motions and hiring and firing lawyers, explains Justice John C. Bouck, who retired from the B.C. Supreme Court in 2006.

Before the ruling, Khawaja’s lawyer, Lawrence Greenspon, said his client was trying not to stall and that the practice isn’t as commonplace as some might believe. “In 30 years of practice I’ve never had a client say: Why don’t don’t you put it off so I can collect credit on my sentence. I infer from that that those are very rare individuals.” Greenspan adds that he doesn’t know “any lawyer in Ontario who does that.” Detention centres are “holding cells,” he says. “You want them out of there as quick as you can.” Any lawyer who would willingly keep their client in such horrible conditions would not be acting in their best interest, he says. “That would be quite wrong.”

Rutherford isn’t the first to try to reign in the credit. A year ago, Alberta’s Court of Appeal overturned a ruling granting “triple credit” to Sukhjit Singh Sooch. Convicted of viciously assaulting his ex-girlfriend, Sooch was awarded the triple-time reduction because he’d been forced to triple-bunk in a cell designed for two at the Calgary Remand Centre (a mattress had been placed on the floor of the crowded cell, an increasingly common practice as Alberta copes with a dramatically increased remand population). The appeals court, however, found that by not applying for bail—“a viable possibility,” in his case—Sooch had effectively “consented” to the detention. This, they found, “militates against” the sentence reduction.

So do the wide range of programs now available to inmates at B.C. remand facilities, says Bouck. Given that B.C.’s six remand facilities currently offer drug and alcohol counseling, violence prevention programs, educational opportunities and skills development programs, such detention can no longer be considered “hard time,” he says, calling into question the logic behind double and triple credits.

But that’s not the case in Manitoba, says Deutscher, adding that he hasn’t seen any studies showing that criminals are, in fact, abusing the system. But “the possibility exists,” concedes University of Toronto law professor Kent Roach. Eradicating it, however, could lead to a significant increase in prison populations, given the dramatic increase of remand populations in recent years, he says. In August, B.C.’s remand count hit a record 1,489: a 76 per cent increase from the average count five years ago. Canada-wide, there are currently more adults in custody awaiting either trial or sentencing than there are serving a sentence, according to Statistics Canada.

But reducing prison populations was never the intended purpose of the credit—which is fast “taking on a life of its own,” warned Ontario Court of Appeal judge Michael Moldaver, in a footnote to a 2004 ruling. The ruling granted a four-year credit for 18 months spent in pre-trial custody—a “disturbing” result, said Moldaver, who concluded that it may be time to revisit the issue. The top cops in B.C.’s Liberal government—facing a May 12 election in which justice is sure be a top issue—have decided that day has come.

So too, it seems, has Justice Rutherford.