No longer reporting for duty

Dismissed by the Canadian Forces, Robert Semrau begins the next stage of life—as a civilian 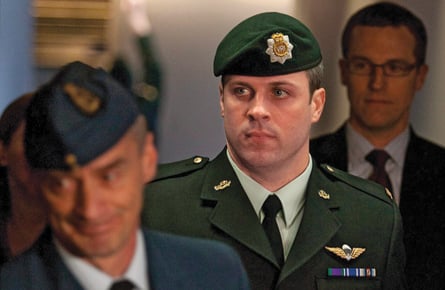 His trial made headlines around the world—and sparked a fierce debate about mercy killing in a combat zone—but Robert Semrau’s final day in uniform passed without any publicity at all. He arrived at CFB Petawawa on Jan. 13, enjoyed a farewell lunch with fellow officers, and after many hugs and handshakes, left the base for the last time. As a civilian. “He certainly didn’t leave under a cloud of shame,” one soldier told Maclean’s. “Everyone wished him the best, and told him how tough it was to see him go.”

For Semrau and his family, tough doesn’t even begin to describe the past three years. In the summer of 2008, the Moose Jaw, Sask., native deployed to Kandahar as a respected infantry captain assigned to mentor Afghan troops as they hunted for Taliban. By December, he was on a plane back home, accused of putting a gravely injured insurgent out of his misery with two bullets to the chest.

Never before had a Canadian soldier been charged with battlefield murder, and when his court martial finally began in March 2010, Semrau was staring at a possible sentence of life behind bars. But his lawyers—knowing full well that compassion is not a legal excuse for murder—never conceded that their client committed a mercy kill. In fact, the defence offered no alternative version of events. They simply attacked the credibility of every Crown witness, hoping to plant the seeds of reasonable doubt.

The strategy worked, to an extent. In July, the jury found Semrau guilty of only one count: disgraceful conduct. The panel believed that he shot the unidentified enemy fighter, but with no corpse and no forensic evidence, they weren’t completely convinced that the man actually died. Semrau’s final punishment? Demotion to second lieutenant and dismissal from the Forces.

Justice Jean-Guy Perron handed down his sentence in October, but it took more than three months to process the paperwork. So Semrau—who, to this day, has never spoken publicly about his case—continued reporting for duty. “Obviously, it was a difficult situation, but he had a ton of support internally,” says Bill Semrau, his older brother. “He’s happy to finally have all this behind him. It’s time to move on to the next step.”

That next step, if all goes well, will be a career in the private security sector. “It’s unfortunate that Rob can’t continue to serve in the Canadian military, which is the life he loved,” Bill says. “But we are confident that he’ll be able to find something else, somewhere that will value his skills and what he can offer.”

Sadly, Semrau could have offered quite a lot later this summer, when Canadian troops pull out of Kandahar and begin training Afghan soldiers and police officers in Kabul. During his sentencing hearing, Maj. Cayle Obermayer, who fought with Semrau in Afghanistan, testified that he was “the best mentor he had worked with.” (Another infantryman, Pte. Joseph Villeneuve, recalled how Semrau saved his life during a deadly mortar attack in the volatile Panjwaii district.)

A dozen other soldiers wrote letters of support to the judge, praising Semrau’s “tremendous courage and moral fibre.” Recently released by the Department of National Defence, they paint a very clear picture of the kind of officer the army just lost. “I have always joked with friends that I would ‘follow Rob through the gates of hell,’ ” wrote one captain from the Royal Canadian Regiment. “Despite his recent conviction, I would absolutely still follow him into the field and strongly believe that all that know him would do the same.”