No more monkeys driving around Toronto?

A bill before Toronto city council would ban exotic animals in mobile zoos, raising questions about animals in the urban jungle 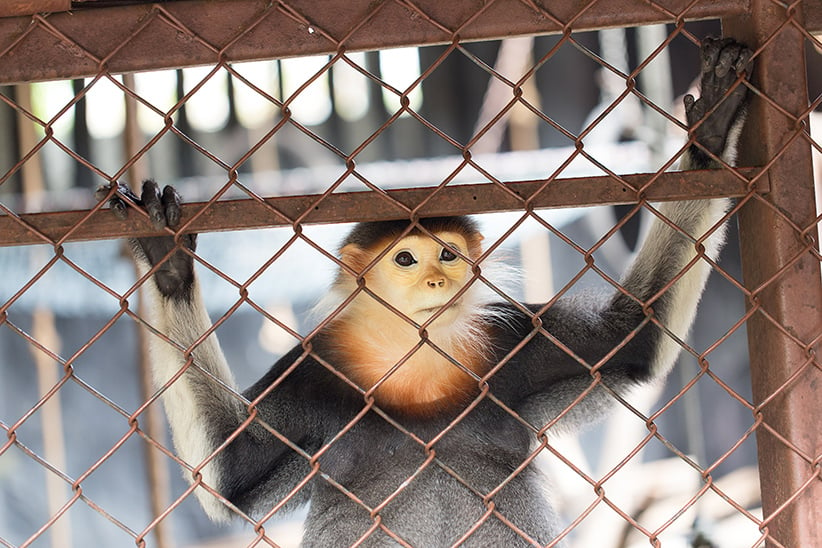 There shall be no more flamingoes in classrooms, no crocodilians or cane toads at birthday parties, nor Pueblan milksnakes at Boy Scout jamborees. There shall be no vans stuck in traffic with amphibious passengers or planes flying into Pearson International Airport with lemurs ready for tour. Based on Toronto city council recommendations discussed Wednesday, there shall be no more mobile exotic zoos in Toronto.

“It’s just wrong,” says Paula Fletcher, a city councillor who is trying to change bylaws on exotic species. “There’s no way you can happily transport these animals around the city.” About 50 humans showed up to city hall Wednesday to discuss a bylaw that would prevent mobile zoos from bringing exotic species to schools, fairs or other events. The bill would force the zoos to replace their king cobras and silvery cheeked hornbills with non-prohibited animals like rabbits, parrots or cats. Supporters of the bill argue that exotic animals shouldn’t be poked and prodded, but a less discussed problem is that wildlife don’t travel well—monkeys get carsick, and warthogs don’t want Air Miles.

“It’s just very traumatizing,” says Fletcher, “when they’re being moved around in a car, in a truck, in whatever, loaded in or out.” The traveling animal industry, or “mobile live animal programs,” include Little Ray’s Reptile Zoo and Nature Centre, several not-for-profits like Earth Rangers and the Toronto Zoo’s mobile unit. For education or therapy, these zoos-on-wheels enjoy privileged permission to take exotic species into almost all facilities excluding daycares.

Some say the animals travel in comfort. In the case of most birds, “they don’t get over-heated,” says Paul Stevens of a bird-breeding group, the Aviculture Advancement Council of Canada, who attended the council meeting. “There’s no trampling of one bird over another.” He says most zoos showcase the animals “because they feel an obligation to perpetuate the species of these rare heritage birds.”

Paul Raymond, the director of Little Ray’s, says the prohibition on exotic animals in mobile zoos doesn’t make sense because it still enables them to take pets like cats, dogs and parrots on tour. He says many exotic species can in fact travel happily.”There are tons of kangaroos that you shouldn’t be putting in a crate. That doesn’t mean there isn’t a kangaroo in the world that would be very content and adjust very well.”

But even when zoos are caring for their animals on the road, they have been known to startle locals. “I had this experience of a kangaroo on a leash in my ward,” says Fletcher, explaining that a company was exhibiting nearby, and a staff member took the Australian creature for a walk. (The company in question, based in Ottawa, declined to comment). “What’s a kangaroo doing on a leash? Nobody could believe their eyes when they saw it on Carlaw Avenue,” says Fletcher. She initially suspected delusion, “but there was more than one call. It definitely was corroborated.”

Meanwhile, researchers have corroborated that many animals do get motion sick. In one study in the journal Clinical Pharmacology, squirrel monkeys were found “highly perceptible” to vomiting in plane and car simulations, as were dogs and cats, which couldn’t be appeased with drugs similar to Gravol. In another study, in Frontiers in Aging Neuroscience, middle-aged rats in car-like simulators got so nauseous they defecated, nearly becoming a new kind of roadkill.

Toronto already blacklists most of the animal kingdom. From jackasses and kiwis to hybrid wolf dogs, the prohibited species list ensures the city is a jungle made mostly of concrete. The prohibition is justified by public safety, hygiene and animal welfare, and the new bylaw also proposes to extend this list of animals banned entirely from the city to include penguins and flamingoes, after Fletcher reported seeing a flamingo on exhibit at an event in her ward, standing in one inch of water in a pie tray.

Ripley’s Aquarium argued to council that a prohibition on touring exotic zoos would drive the market underground, but the bill will be finalized in July. Since mobile zoos have already booked events this year, the bill, if passed, would come into effect Jan. 1, at which point there shall be no more kangaroos on Carlaw.