Harjit Sajjan: 'The previous cuts, which I'm aware of and felt myself, did have an impact, but what's done is done' 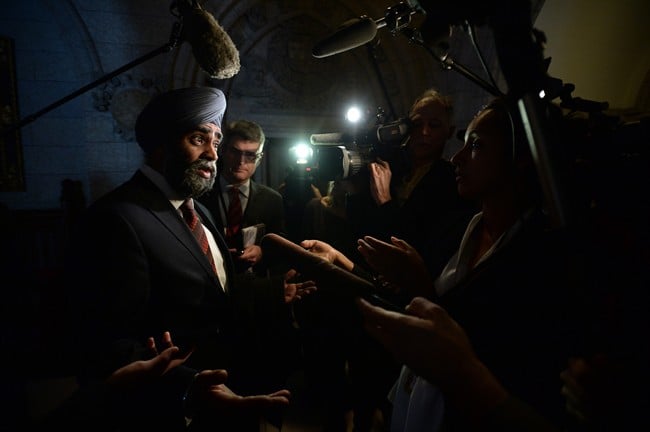 Sajjan was reacting to a fresh batch of numbers detailing spending cuts from four years ago, released Friday by the Liberal government in response to a long-standing and disputed request by the parliamentary budget office.

However, the numbers made public Friday did not contain key information long sought by the federal budget watchdog: how, exactly, the cuts affected services for Canadians.

The data did show $1.19 billion in defence spending was cut in 2012, the first wave in a series of reductions that eventually saw over $2.1 billion per year carved out of the military’s funding envelope.

Sajjan, a reserve force lieutenant-colonel, said he witnessed the effects of the cuts.

“The previous cuts, which I’m aware of and felt myself, did have an impact, but what’s done is done,” Sajjan said Friday.

“I’m the minister of defence now and our government is looking at making sure that the planned increases are there. The military, what it needs to move forward is stable, predictable funding, and that’s what I’m working towards and make sure it’s going to happen.”

What the newly released figures did reveal was where those cuts were directed, including a $40 million per year reduction in the number of reservists — or part-time soldiers — and $305 million annually to restrain growth in the military.

Since the cuts, the bottom has effectively fallen out of the reserves with a 19 per cent drop in the size of the force — something defence experts attribute to a lack of money for training or other activities.

In their last budget, the Conservative government promised to begin ramping up defence spending starting in 2017, a commitment the Liberals have said they plan to keep.

“We are guided by the principle that government data belongs to all Canadians,” Brison wrote in the letter, posted on the Treasury Board’s website.

Frechette said he was pleased with Brison’s gesture of openness in the letter and his offer to meet with him.

But he added that while neatly packaged, most of the figures weren’t new to the budget office. The office had already accumulated most of the information via other means.

The batch of numbers also lacked a key component to help the PBO assess how the cuts affected services for Canadians, he said.

Ex-parliamentary budget officer Kevin Page once tried to challenge the former Tory government in court to turn over details on its cost-cutting programs. The Federal Court sidestepped the question of whether the government can deny information to the PBO.

Sahir Khan, a former assistant parliamentary officer, wrote in an email Friday that the release reinforces the legal position that PBO should have access to the information.

The new government is willing to disclose more data to the public than its Tory predecessors, but what’s been released still falls short in the “critical area” of service level impacts from the cuts, said Khan, now a senior visiting fellow at University of Ottawa.

“These were not included in today’s disclosure,” he wrote.

“This is troubling because the collection of such information is subject to Treasury Board policy and integral to the government’s reporting to Parliament.”