By suggesting there is nuance to the use of blackface, Normand Brathwaite committed the ultimate faux pas: critiquing while black. 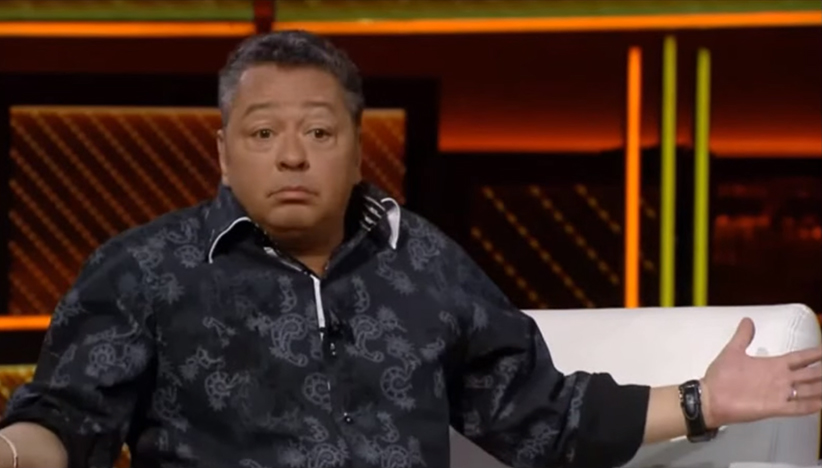 Normand Brathwaite is many things: actor, comedian, musician, radio personality, variety show host, noted pitchman for a Quebec-based chain of hardware stores. Brathwaite, who grew up in Montreal, had his first break in 1979, at the age of 21, when he appeared as Patrice on the Quebec sitcom Chez Denise, thus becoming the first black character on Quebec television.

It might be somewhat surprising, then, to hear that Brathwaite is also an Uncle Tom-style minstrel, a patsy of Quebec’s white establishment and a disgrace to black people in the province and beyond. The Black Coalition of Quebec called him a “buffoon,” while Huffington Post contributor Rachel Décoste tweeted a video calling him “the ‘black’ ass-licker par excellence.”

All this because Brathwaite voiced his opinion on blackface. The practice of white actors donning face paint to portray black characters is a long simmering issue in Quebec, where the practice is still de rigueur. You can practically set your watch to the periodic bursts of outrage from within and beyond Quebec’s borders.

The most recent burst came about after actor and producer Louis Morissette complained of having to hire a black actor to portray a black person in a skit for Bye Bye, Radio-Canada’s year-in-review. Why not, Morissette wondered, get one of his troupe to don black makeup? Morissette’s Radio-Canada minders wouldn’t let him, so he hired Brathwaite to do the skit.

To be sure, Brathwaite finds blackface, as it was mostly practised in the U.S., to be abhorrent. “Blackface is where an actor covers his face with black, with big white lips. It’s designed so that people can laugh at black people,” he said on a Quebec talk show recently. What landed him in trouble, though, is what he said next. “The blackface we do in Quebec, it is done to interpret a character.”

You can agree or disagree with Brathwaite’s opinion on blackface. That’s the fun thing about opinions. Yet if the Uncle Tom jargon lobbed at Brathwaite by his (mostly black) critics is any indication, one goes against the status quo at one’s own peril—particularly if one happens to be black.

In fact, for being black himself, Brathwaite committed two sins: he defended blackface as practised in Quebec, and he insulted the Black Coalition of Quebec when it critiqued this defence. “It’s difficult to consider you a role model for Quebec’s black community,” the group wrote in a Feb. 6 statement. “Rather, the roles you play on television are those of a buffoon who doesn’t know the history or problems of our community.”

It gets worse. Consider Décoste’s recent column on the subject. Referring to Brathwaite as “perennial token-black-character,” Décoste said that Brathwaite and fellow comedian Boucar Diouf stood up for blackface in order to “defend their masters” who rule over “Quebec’s white-dominated” entertainment industry. “It’s painful to watch someone pimp themselves out for a paycheque,” Décoste sniffed.

In this flurry of race-baiting rhetoric, it might be worth remembering Brathwaite’s own origins. The product of a white mother and a black father, at a time when such a thing was considered verboten, he grew up a black kid who was into theatre—a bit of an oddity, particularly in the working-class neighbourhood of Rosemont. His ancestors arrived here as slaves. His father was a mechanic. He made himself a star.

In doing so, he made Quebec’s (yes) lily-white cultural scene a little bit less so. “When [Brathwaite] arrived on the scene, the average Quebecer was a bit backward, a bit racist,” comedian Mike Ward pointed out during a 2012 roast of Brathwaite. “His talent, his charisma was such that it made that backward racist a little less backward and a little less racist.”

And yet, by suggesting there is nuance to the use of blackface, Brathwaite committed the ultimate faux pas: critiquing while black. Maybe he’ll learn to keep his mouth shut next time.

Clarification: A previous version of this post said that in her tweet, Décoste “called [Brathwaite] the ‘”black” ass-licker par excellence.” She tweeted those words, from the title of a Youtube video. 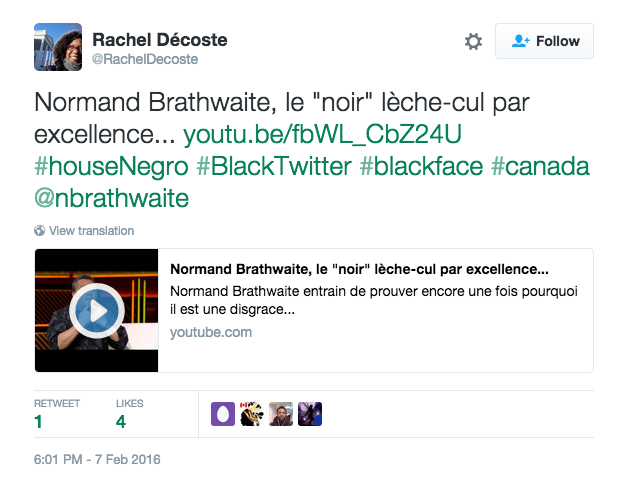