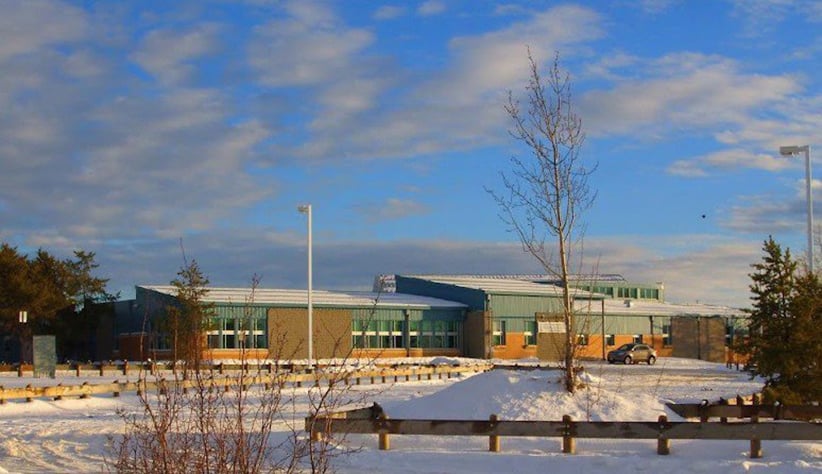 La Loche Community School is shown in an undated photo. A government source tells The Canadian Press at least two people have been killed in a shooting at the remote northern Saskatchewan school. (Ho Kayoty/Wikipedia/CP)

LA LOCHE, Sask. — RCMP have revised the number of people killed in a northern Saskatchewan shooting to four from five.

No information about the victims or even the number of people injured is available.

Chief Supt. Maureen Levy says she can’t release details about the shootings in La Loche because that could jeopardize the integrity of the investigation.

Levy says one male is in custody and police have confiscated a firearm.

She says lockdowns at two schools have been lifted and students have been moved to a safe location.

Levy says specialized police personnel are on site at the La Loche high school and at another location in the community.

Prime Minister Justin Trudeau had said from Davos, Switzerland, that he had been informed that five people were killed and two critically injured in the remote Dene community.

RCMP did not offer an explanation for the discrepancy.

Details about what happened are still scarce. RCMP said they have investigators at the school and at a second location in the town.

Trudeau said the commissioner of the RCMP advised him of the situation.

“Obviously this is every parent’s worst nightmare,” the prime minister said.

“We all grieve with and stand with the community of La Loche and all of Saskatchewan on this terrible, tragic day.”

Premier Brad Wall issued a statement expressing shock and sorrow at what he called “the horrific events.”

The school’s high school building, which houses students from Grades 7 to 12, was put in lockdown. The Ducharme Elementary School a few blocks away was also locked down as a precaution.

Mounties asked parents and residents to stay away.

School co-ordinator Norma Janvier said she was in her office when she heard gunshots.

“I didn’t know what was going on … I thought the kids were just playing around or something, like a locker slamming and stuff,” she told The Canadian Press.

She was going to check on the noise, but a teacher closed her office door, so Janvier stayed inside until she was told it was safe to leave.

“All I heard was cops running around in the school.”

Wall promised that necessary crisis support and counselling services would be provided to the school and the community.

La Loche is a remote Dene community of about 3,000 people on the eastern shore of Lac La Loche in the northern boreal forest. About 900 students attend the two schools in the town, where many residents hunt and fish to support their families.

The area’s NDP MP, who attended the same school, was setting up a constituency office in the community when the shooting occurred.

“We’re fairly shaken up. It’s a sad day,” said Georgina Jolibois, who was mayor of La Loche until she was elected federally last fall.

“My own nieces and nephews were inside the school.”

Jolibois said she went to the school and spoke with some of her family members, who were unharmed.

“I learned with deep sadness and shock today about the shooting at a high school and another location in Saskatchewan that involved multiple deaths and injuries.

“I was immediately in touch with the Minister of Public Safety, the Hon. Ralph Goodale, and the Commissioner of the RCMP, Bob Paulson, and am receiving regular updates on the situation.

“On behalf of all Canadians, Sophie and I offer the families and friends of the victims our deepest condolences on this darkest of days. Our hearts and prayers are also with those injured in the attack, that they may have a full and speedy recovery.

“I wish to thank first responders—law enforcement and medical personnel— who managed this very difficult situation with bravery and professionalism.

“On this sad day the whole country grieves with the people of La Loche and of Saskatchewan.”

Rona Ambrose, Leader of the Official Opposition and interim Leader of the Conservative Party of Canada, issued the following statement:

“Words cannot express the grief and sorrow we feel for the victims of today’s shooting in La Loche, Saskatchewan, as well as for their families and loved ones.

“For the people of La Loche, whose community has been shattered by these events, I know that all Canadians offer their support and sympathy. For those who have been injured, we pray for a speedy recovery. And for those who have experienced such a terrible loss, as you grieve, Canadians grieve alongside you.

“On behalf of the Official Opposition and the Conservative Party of Canada, I offer my sincerest condolences.”

“We are shocked and saddened by this incident and the reports of injuries and deaths in La Loche, Saskatchewan,” said AFN National Chief Bellegarde. “I have been in contact with both Clearwater River Dene Nation Chief Teddy Clark and AFN Saskatchewan Regional Chief Bobby Cameron and have also spoken to RCMP Commissioner Bob Paulson. More details will be forthcoming but our priority right now is allowing the local leadership and authorities to do their work in the interests of the safety and security of all those in the area. Our thoughts and prayers are with all those affected by this situation and we send our deepest condolences to the family and friends of the victims in this tragic incident.”

Statement from U.S. Ambassador Bruce A. Heyman:
“On behalf of the government and people of the United States, I would like to express my deepest condolences to the families and loved ones of the victims of today’s tragic shooting in La Loche, Saskatchewan.  I hope for the swift and full recovery of the injured victims. We have experienced similar tragedies far too often in the United States and understand all too well the heartache and sadness that result from such a horrific event. Our thoughts and prayers remain with the victims and their families, the community of La Loche, the residents of Saskatchewan, and all Canadians during this most difficult time.”
NDP Leader Tom Mulcair:
“I wish to echo the words of my friend and colleague, Georgina Jolibois, the former mayor of La Loche and the current MP of the area, regarding today’s tragedy.  Catherine and I are shocked and heartbroken after hearing the news of a shooting at the La Loche Community School.  We send our love to the families of those who lost their lives, those injured and the entire community that has greatly suffered this terrible loss.  And I would like to thank Georgina for going above and beyond in supporting her community in the aftermath of this loss of life.  We may not have the words to describe what happened today but, no matter where we are, we can all feel the devastating pain in La Loche tonight.”
FILED UNDER: La Loche shooting