Thousands of dead herring have been found along western Nova Scotia. Now, scores of dead starfish, clams, lobsters and mussels are washing ashore, too. 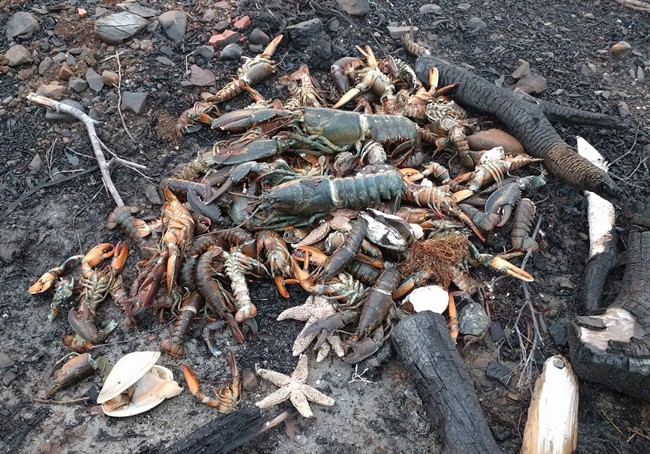 Fisheries officers were on beaches in the St. Marys Bay area Wednesday, collecting samples as their investigation expanded beyond the herring that first appeared a month ago.

“We’re seeing multiple species throughout that area. We started to see them late last week … but over the last 48 hours, we’ve been seeing more significant reports,” said Doug Wentzell, regional director of fisheries management for the Department of Fisheries and Oceans.

“Everything to date has come back negative. So now that we’ve got a few other species involved, that causes us to broaden the scope again,” Wentzell said. “We’re going back to the drawing board to make sure that we have not left any stone unturned.”

Wentzell said the DFO could find no connection between the fish kill and the Cape Sharp Tidal turbine that began producing power in November in the Minas Passage, about 150 kilometres away.

Dead herring have been found in a 100-kilometre swath of western Nova Scotia from St. Marys Bay to Tusket, with most between the mouth of the Sissiboo River and Plympton. Wentzell said the wider number of species have washed up in that same narrow area of St. Marys Bay.

MORE: Scientists mystified by deaths of thousands of fish in Nova Scotia

Eric Hewey, a 23-year-old native of the area who now lives in Halifax, posted photos of the dead sea life on the beach at Savary Provincial Park on his Facebook page over the holidays.

He said he had been visiting family when a friend said they had to “come see the beach” in Plympton.

“We went down and (saw) masses of dead sea life,” Hewey said in an email Wednesday. “Anecdotally, nobody we know has ever seen this happen, and it causes a lot of emotions. This is the livelihoods of so many people, and indirectly other people.”

Ted Leighton, an adjunct biology professor at Nova Scotia’s University of Sainte-Anne, has compiled more than 40 sightings of dead herring since late November.

The herring deaths were cause enough for concern, Leighton said, but now that new species have surfaced dead, it’s time to figure out “what’s really going on.”

“We’re kind of in the dark, not from lack of trying, but from the complexity of the case,” he said.

Leighton said that until scientists know what’s killing the herring, it’s hard to say whether other marine life could be vulnerable to the same forces.

“They may or may not be related,” said Leighton. “If they are related, they may be related in sort of an indirect means … (like) different pieces of global warming.”

Leighton said scientists can make some inferences based on the broad swath of species that were swept ashore in the last “pulse” of deaths.

A starfish, a lobster and a herring have very little in common, said Leighton, and it’s unlikely that an infectious disease, which targets a narrow range of organisms, could wipe out such a diverse cross-section of marine life.

Leighton said the only trait the fish share is where they live — the bottom of St. Marys Bay — so the answer may lie near the sea floor. A lethal change in marine habitat, like toxic water contamination or lack of oxygen, has the potential to wipe out all life it touches, he said.

Wentzell said despite the mystery, fish kills have been known to happen. He understands, though, why local are concerned.

“We’ve got a lot of citizens that are very engaged in this, which I can certainly appreciate if I was living in that area. It has generated a lot of tension on social media. It’s a visible issue and it’s one that I can see generating a lot of interest.”