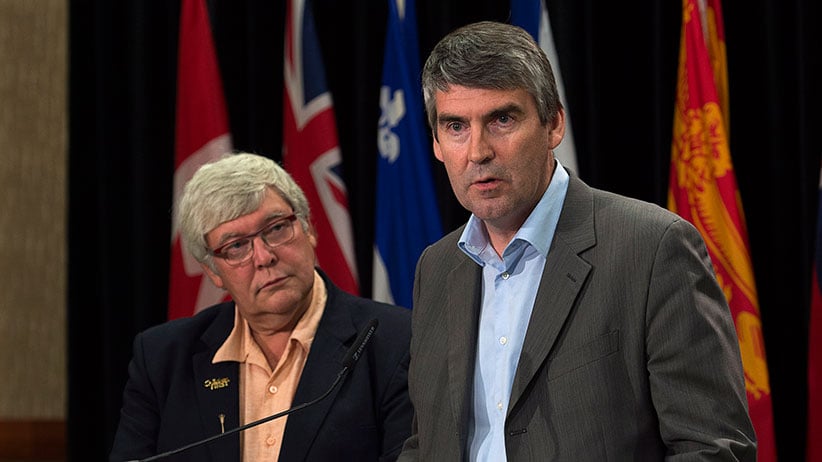 Nova Scotia Premier Stephen McNeil talks with reporters at the annual Council of the Federation meeting in Charlottetown in 2014 as then Alberta premier Dave Hancock looks on. (Andrew Vaughan/The Canadian Press)

The province’s Liberal government was largely able to pull it off by holding the line on departmental spending while reaping the benefit of a $234 million increase in tax revenue collected mostly through personal income taxes, a 2.6 per cent jump in revenue over last year.

In a budget with $10.1 billion in spending, the new surplus figure is an improvement on the $241.2 million deficit forecast in December.

Finance Minister Randy Delorey highlighted the budgetary good fortune, but cautioned things could change quickly because the province is “not immune” to global economic slowdowns and shocks.

“We know economic ups and downs will continue,” Delorey said in his address to the legislature.

“We also know we are not powerless. We can grow our surplus so we can become a source of stability in this region.”

Progressive Conservative Leader Jamie Baillie scoffed at the surplus, calling it “bogus” and the product of rosy projections for tax revenue.

“It’s like money is going to rain down into the pockets of Nova Scotians in the coming year and they can tax it,” said Baillie. “This budget is going to fall apart the moment the day it hits the real world.”

Baillie said he doubts the surplus will grow given that employment has decreased over the last three years and added an opportunity was missed to lower the tax burden for Nova Scotians.

In particular, Burrill was critical of the lack of help for post secondary students and said the government should have moved as New Brunswick did last week to provide more up-front financial assistance.

When asked why there had been such a significant swing from deficit projections in December, when Delorey blamed softened government revenues on a drop in tax revenue and offshore royalties, the minister said it was because of a combination of things including more tax information from the federal government.

“Revenue did soften within departments,” he said. “What you will also see though is that through the decisions we made and good management we have reduced our expenses more than the revenue has softened, which has enabled us to improve our position.”

The budget promises include modest amounts for a series of spending initiatives, many of which were previously announced, while continuing promised multi-year spending in education.

There is $6.6 million to improve a childcare system which a recent report said employs the lowest paid early childhood educators in Canada. The government says the money would be used to improve wages and subsidies to parents, although the amount of the increases won’t be released until Education Minister Karen Casey gives her official response to her department’s report within the next week.

Delorey didn’t reveal any details either, but did say the funding would push pay for daycare workers “closer to the national average.”

CUPE Nova Scotia president Dianne Frittenburg said the overall funding figure falls short of what workers in the sector expect. She compared the figure to the $10.2 million included to refloat the ferry from Yarmouth, N.S., to Portland, Maine.

“I’m not saying the Yarmouth ferry isn’t important but it (early childhood education) should have equal footing,” said Frittenburg.

In a completely new measure, the budget allocates $7.5 million towards increasing income assistance by $20 a month beginning May 1 for up to 25,000 eligible people.

Other spending measures include $3.6 million to help children with autism access specialized therapy and a 25 per cent refundable food bank tax credit for farmers that will cost $300,000.

Education will get $21 million as part of a four-year $65 million government pledge. The money includes $6.4 million to cap class sizes up to Grade 6 and $7.5 million to help improve literacy and math skills.

The only tax increase in the budget hits smokers, with cigarettes going up two cents each or 50 cents a pack and the tax rate on cigars going up by four per cent at midnight. The moves are expected to bring $15.8 million to provincial coffers.

Health spending, at $4.1 billion, takes up 40 per cent of the overall budget. It includes $14.4 million for home care, including home support and nursing.

As previously announced there is $3.7 million earmarked for the redesign of the decrepit Victoria General Hospital in Halifax, but no money to replace it.

However, in an accounting measure, the government said it was taking a one-time $110 million payment from Ottawa and the Halifax Regional Municipality for the city’s new convention centre and applying it to the debt.

Officials said the payment on the debt would free up money in the future to launch a multi-year redevelopment of the Queen Elizabeth II Health Sciences Centre.