Number of asylum claimants up, but officials won't call it a trend

What you need to know about what's happening at the Canada-U.S. border 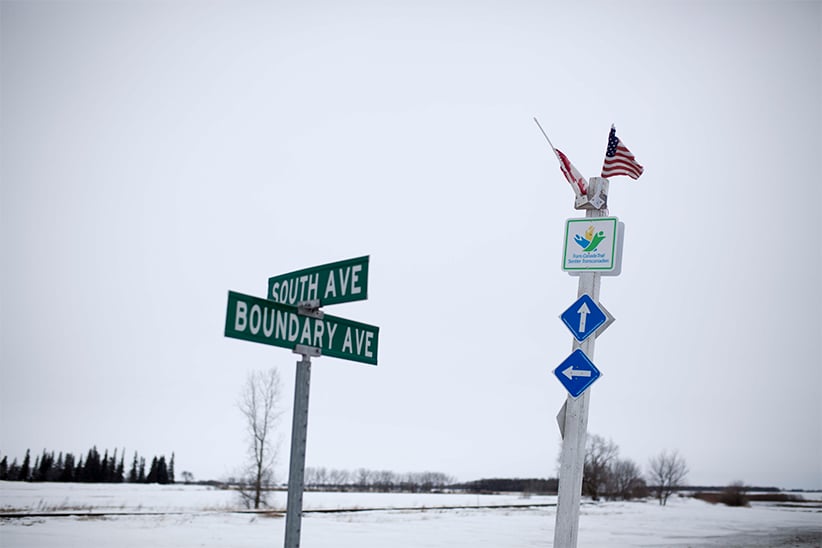 The eastern border of Emerson, Manitoba and Noyes, Minnesota, where refugees cross into Canada. Emerson, located 96 kilometers south of Winnipeg, is a popular crossing for asylum seekers. (Photograph by Nick Iwanyshyn)

OTTAWA – Immigration and border officials say it’s far too early to speculate about whether a definite increase in the number of asylum claims being made in Canada is a trend that merits a change in the way the border, or Canada’s asylum system, is managed.

Since the start of this year, 1,698 people have presented themselves at Canada-U.S. border crossings and asked for refugee protection, compared with 728 people who did so during the same time period of 2016.

Meanwhile, some 435 people have crossed illegally into Canada in places like Emerson, Man. — about the same number of illegal entrants per month as last year.

MORE: The new underground railroad from the U.S. to Canada

While the RCMP say they have yet to lay charges against anyone who has come across the border illegally in recent months, border officials also say most have been deemed eligible to make asylum claims. That means none can be charged with crossing illegally into Canada until after those claims are heard, a process that will take months.

Officials who hosted Thursday’s technical briefing declined to say at what point they’d consider the rising number of claimants a trend, or whether warmer weather could increase those crossing into Canada between border points.

Here are the answers to some common questions about what’s happening at the Canada-U.S. border.

1. What happens when people cross into Canada at any point other than an official border crossing?

Those intercepted by the RCMP or local police are arrested, then brought to the nearest Canada Border Services Agency port of entry or office or an Immigration Department office. There, they are given a health assessment to assess any immediate needs, then a security screening to see if they post a security threat to Canada and whether they are eligible to make a refugee claim.

If deemed eligible to make a claim, in most cases the person will be released while they await their refugee hearing. If they are deemed ineligible, a removal order is issued and they are released on condition they report for further removal proceedings. In some cases, immigration officers will assess the risk a person might face if they are returned to their home country, what’s known as a pre-removal risk assessment.

2. Are people crossing into Canada in those places breaking the law?

Both Canada’s Immigration and Refugee Protection Act and the Customs Act say anyone who wants to come to Canada must present themselves at an official border point, and must also have valid documentation required for the purpose of their entry or stay, such as a visitor visa or work visa. If they try to get into Canada elsewhere, that’s illegal and they can face charges.

In theory, people could be charged for breaking the law. But Section 133 of the Immigration and Refugee Protection Act carves out an exemption for asylum seekers. It says those who claim refugee status in Canada can’t be charged with a criminal offence relating to how they got here until their claim is decided. If it’s founded, they will not be charged. If their claim is rejected, they can be.

4. What’s the difference between an asylum claimant and a resettled refugee?

The distinction between the two is how they arrived in Canada. Resettled refugees are brought in by the government or private sponsors from abroad and arrive in Canada as permanent residents. Asylum claimants are already in Canada — or at the border — in search of refugee status. In 2016, 23,994 people filed asylum claims in Canada, up from 16,113 the year before.

5. Can anyone make an asylum claim in Canada?

There are several circumstances in which someone is prohibited make a claim for asylum in Canada.

They include not being admissible to Canada on security grounds or because of criminal activity or human rights violations, or because the person has already made a claim that’s been rejected. Also, those recognized as refugees in other countries to which they could return aren’t eligible to claim status in Canada.

There’s also the question of where they are making the claim. The Safe Third Country agreement between Canada and the U.S. says that anyone who arrives at a land border crossing, or comes into either country via the train, cannot lodge an asylum claim. That’s because they are required to make their claim in the country where they first arrived. There are exceptions to that rule, including if they are seeking to join family members, are unaccompanied minors, hold certain specific documents or if an exception can be made in the public interest.

6. What are the grounds for lodging an asylum claim?

People can be given refugee protection in Canada if they meet the United Nations definition of a Convention refugee: those with a well-founded fear of persecution because of their race, religion, nationality, political opinion or membership in a particular social group.

People seeking protection must show that if they return to their home country, they will face a risk of torture, death or cruel and unusual treatment or punishment.