Manitoba reserve to get its 'Freedom Road'

After 18 years under a boil-water advisory, Shoal Lake 40 First Nation will finally be connected to the mainland 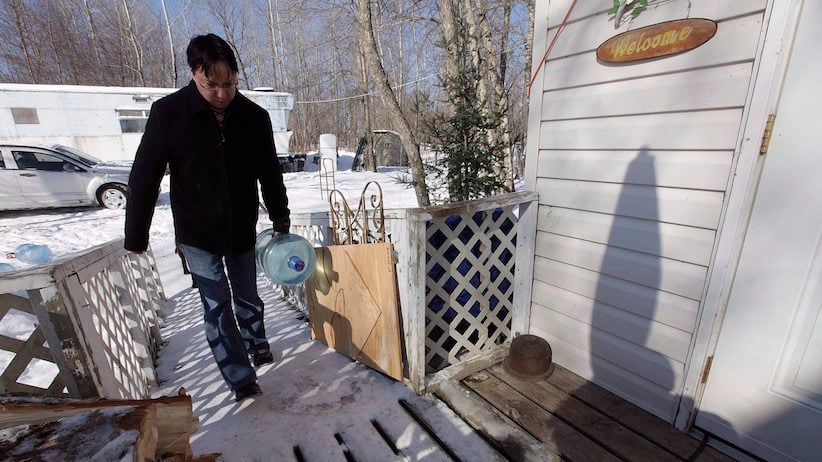 Ashley Green, a resident of Shoal Lake 40 First Nation, carries a 20-litre water container into his home Wednesday, February 25, 2015. Canada’s new indigenous affairs minister says the isolated reserve, under one of the country’s longest boil-water advisories, will get an all-weather road to connect it to the rest of the country. THE CANADIAN PRESS/John Woods

WINNIPEG – Tears flowed and a victory drumming song reverberated through the Manitoba legislature Thursday as an isolated reserve under one of the country’s longest boil-water advisories received a lifeline to the outside world.

It was a day Chief Erwin Redsky said he never thought he would see in his lifetime — all three levels of government coming together to fund a $30-million all-weather road connecting his reserve, Shoal Lake 40, and its 270 residents to the mainland.

The commitment marks a turning point for the community and for First Nations in Canada, he said.

“This is a new beginning,” Redsky said, his voice shaking. “Let’s not dwell on the past. Let’s move forward together.

“First Nations will be part of this country to rebuild it again. Today, the work begins.”

The reserve, on the Manitoba-Ontario boundary, was cut off 101 years ago during construction of an aqueduct to carry fresh water to Winnipeg. The land was taken without permission and residents have been living with the consequences ever since, Redsky said.

The reserve has been without clean water for 18 years.

A new water treatment plant is too expensive to build without a road to transport supplies, he said. Residents have died crossing an ice road in the winter.

In the summer, the First Nation depends on an aging ferry, but the vessel failed a government inspection this year. Ambulances won’t risk going to the community and children have to leave the reserve to continue their education past Grade 8.

The former Conservative government refused to commit to help fund construction of a road despite willingness by Manitoba and Winnipeg to share the cost.

However, the Liberals promised during the recent election to come up with Ottawa’s share.

“This couldn’t wait any longer,” Bennett told the crowd to applause. “We see this as an important first step in us partnering with First Nations and renewing the relationship.”

Premier Greg Selinger said the plight of Shoal Lake 40 is a “basic injustice.”

“There is no better time in this period of reconciliation to move on this project that will make a tremendous difference for the people of that community,” he said. “It will allow us to sleep at night knowing they’re getting the same treatment that we’re getting in Winnipeg.”

Knowing “Freedom Road” will soon be under construction will help Stewart Redsky sleep a little better as well.

Redsky’s wife lost the couple’s baby and she almost died 30 years ago when an ambulance couldn’t make it across the water to the reserve. She was unable to have any more children. Other friends have died falling through the ice, he said.

“It’s been a dear price that we’ve paid for 101 years,” he said, tears in his eyes. “I can go to sleep tonight knowing … Freedom Road is a reality now.”

For Sharon Redsky, who lives off the reserve, it’s a road home.

There are hundreds of people who have left that might soon be able to bring their skills back to revitalize the community’s economy, she said.

“A lot of us can’t sustain jobs living on the reserve because you can’t safely get on and off,” she said.

“We’re really looking forward to coming back to the community.”