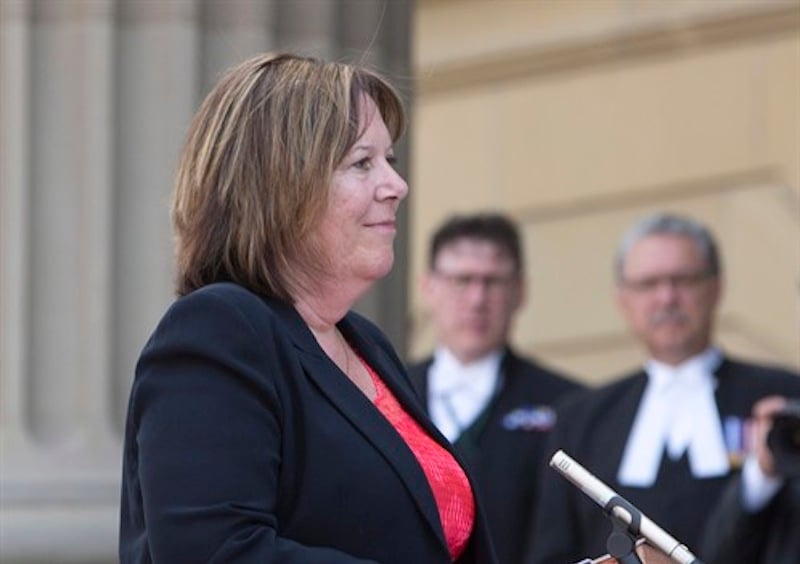 Margaret Mccuaig-Boyd is sworn in as the Alberta Minister of Energy in Edmonton on Sunday, May 24, 2015. (Jason Franson/CP)

CALGARY – News that Marg McCuaig-Boyd would be Alberta’s new energy minister was greeted by the oilpatch with a collective, “Who?”

The newly elected NDP politician from the province’s northwest touts education, administration and business consulting in her bio, but nothing related to oil and gas.

He said he was happy to see Premier Rachel Notley reach out to energy industry leaders immediately after the election, but he’s concerned about what signal the choice for energy minister sends.

“She appointed someone that probably wouldn’t be considered to be high up within her party. That’s sending a message of how important she views the energy portfolio, I think,” he said.

“Maybe it’s sending the wrong message to the energy industry.”

Giving the energy portfolio to someone more recognizable would have been a good move, said Pelletier.

That could have been Notley herself, or someone like legislature veteran Brian Mason, who is government house leader and minister of infrastructure and transportation.

“The oil business has so many moving parts. I tend to think you need to have some background in it to be able to fully understand and appreciate everything that’s involved in it,” he said.

McCuaig-Boyd, 62, did not return messages for comment. But she told radio station CKYL that a review of the province’s oil and gas royalties would be a priority.

She said she’s excited to take on the high-profile portfolio. And if Twitter mentions are any indication, she knows she’s already “under the microscope.”

“I think I’ll be a good representative for our industry for sure,” she told CKYL.

McCuaig-Boyd and her husband have lived on a farm in the Fairview, Alta., area for 35 years.

Jeff Gaulin, vice-president of communications for the Canadian Association of Petroleum Producers, noted the energy industry has a big presence in that region.

“She would know very well people who work in the industry — if not her friends, then neighbours or colleagues,” he said.

“She comes from a community that would very much experience the good times as well as the challenging times, so I think that she would have a level of familiarity with the industry.”

“I think it’s much more important that they are a critical thinker, somebody who’s able to reach out across a broad range of stakeholders and help create the relationships that the ministry needs to cultivate and is good at making decisions, good at asking the right questions,” he said.

McCuaig-Boyd and the new environment minister, Shannon Phillips, have their work cut out for them, said Severson-Baker.

“There’s a big backlog, especially on the climate change file,” he said.

“One of the things we’d like to do is sit down and understand what their priorities are and help them make some decisions about how to prioritize because the list is too long to deal with everything at once.”