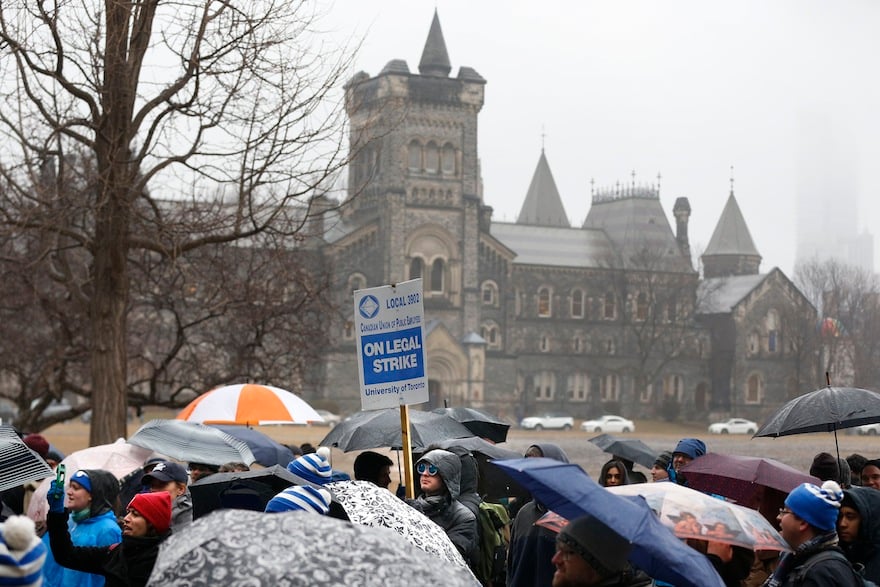 Teachers’ assistants continue their strike outside Simcoe Hall at the University of Toronto on Mar. 25, 2015. (Bernard Weil/Toronto Star via Getty Images)

The month-long strike by graduate students at the University of Toronto may be officially over, but many questions are left to be answered. Will binding arbitration leave grad students in a better position? Will teaching assistants get their minimum annual funding bumped up to $17,500?

And last, but not least: will the strike create an increase in inter-departmental dating?

One of the more unusual tools created to boost morale during the strike was the ingeniously named OkCUPE, a website where CUPE 3902 and 3903 union members at the University of Toronto and at York University could post missed connections from the picket lines. Around 150 posts have appeared in the two weeks since OkCUPE’s inception, including:

To the beautiful French PhD that I tried to charm with my poor language skills: You giggled and I was smitten….. All I can say is that I would buy you a croissant any day.

You were the course instructor with the striped shirt that spoke several times at the March 20th meeting with an Australian/British accent…I’m sorry, I can’t remember which it was, but I do remember that it was HOT. ….

you were a marshal at the rally today, and you were holding a CUPE 3903 flag.

I want you to hold me the way you hold that flag ;)

OkCUPE is the product of a late-night conversation among various strike coordinators, according to Amy Conwell, a Ph.D. student at the Centre for Medieval Studies at the University of Toronto, who came up with the idea and the name. Students can reply to posts directly through the site. About a third received individual replies, according to Fabian Parsch, a math Ph.D. who programmed the site. People had been asking coordinators to set them up with crushes they had met on the picket lines, and a missed-connections site also seemed like a lighthearted way to promote solidarity.

And the site shows how the strike, at least temporarily, broke down some department barriers.

Just throwing it out there… I think the pilosophy [sic] guys and the chemistry girls should hang out, regardless of the ratification outcome

Your picket line dancing and adorable smile made me extra dizzy today as we circled around the picket line, catting-and-mousing one another for hours on end.

OkCUPE also inadvertently created a new University of Toronto campus mini-celebrity: Ben from Math, a math teaching assistant whose rousing speech at a meeting on March 20 inspired a number of posts:

Ben from Math– you were the highlight of the meeting yesterday. You are the new mascot. you are our meme. I love you.

I’d like to drink and derive with you sometime soon. Just cos you made my night!

To Ben from Math. Your charming voice, compelling arguments and passionate rhetoric transformed an otherwise dreary meeting into a rather enjoyable evening. I think I may have rediscovered my long lost interest for Euclid’s theorems.

The hashtag #benfrommath grew in popularity and the last-name-less Ben was interviewed in the strikers’ newsletter, Picket Line Bulletin. But his response to the interviewer’s question about his meteoric rise and newfound social media fame suggests that department boundaries may not budge so easily after all: “I wouldn’t be a good math TA if I didn’t point out that my social media presence is best described by an exponential function and not a meteor (which technically plummets.)”

Although the strike has been called off at the University of Toronto, OkCUPE remains online and some former picketers, it seems, aren’t ready to say goodbye:

We both know that the only reason you haven’t appeared on OkCUPE for a week is that you and your megaphone have been spending all of your time in my dreams.