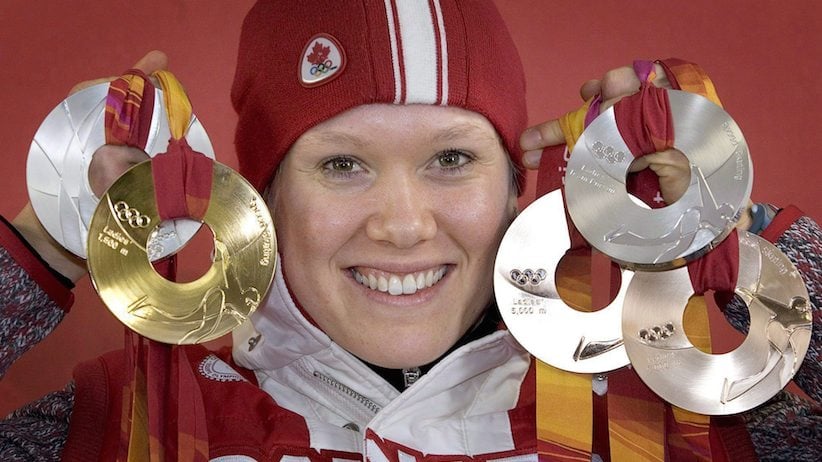 Six-time Olympic medallist Cindy Klassen called it a career Saturday, surrounded by friends, colleagues and family in her hometown of Winnipeg.

The 35-year-old announced her retirement from speedskating after taking a year off following a concussion, and said the break allowed her to reflect on her future.

“It was nice to take a break and a step away from the hard training,” Klassen said.

“I have to admit that when I watch speedskating, I get that itch to go out there and race. But other than that, I don’t miss it as much as I would have when I was younger. This speaks volumes to me, and I know that it’s time to move on to something new.”

Klassen is the only Canadian athlete to win five medals at a single Olympic Games — claiming a gold, two silver and two bronze at the 2006 Winter Games in Turin, Italy. Jacques Rogge, the president of the International Olympic Committee at the time, dubbed Klassen “the woman of the Games.”

Another bronze from 2002 ties Klassen with former teammate Clara Hughes for the most Olympic medals won by a Canadian athlete. Klassen still holds world records in the 1,500 and 3,000 metres, which she set during the 2005-06 season.

Klassen reflected back on her career Saturday, and pointed to the 2006 and 2010 Olympic Games as highlights.

“It has been a tremendous honour to race for our country. I count it as a privilege to have had the chance to wear a uniform with Canada printed on the back.”

Klassen was praised by fellow Winnipeg speedskating Olympian Susan Auch, who retired in 2002. Auch said Klassen pursued excellence and has a well-deserved reputation for kindness as well.

“I first met Cindy in 1999 at the Canada Games and I had heard of this phenom, a young girl from Winnipeg who was going to come and win all the races,” Auch recalled.

“What struck me that day was, this girl is too good to be true,” she added.

“Of all the questions I always get from people, ‘Is she really that nice?’. And she is, Cindy is.”

Klassen overcame adversity in the later stages of her career. She underwent double knee surgery in 2008, and suffered a concussion while inline skating in the summer of 2013.

In February 2008, her sister Lisa was involved in a near-fatal crash, when her sport utility vehicle went off a bridge and plunged into the icy Red River. Klassen flew home from training in Germany, and along with other family members, provided support during her sister’s recovery.

“The support our family felt during that time was overwhelming, and I want to thank friends, family and our church family for their prayers and support, and the countless people our family doesn’t know but who sent words of encouragement and were praying for my sister.”

For now, Klassen says she plans to finish her university degree and focus on the next stage of her life.

“It’s been a year (since I raced) and my legs have just shrunk,” she said with a laugh.

“I just feel ready to move on and put speedskating behind me.”