Why I changed my mind about Omar Khadr

Scott Gilmore on the ancient ritual of the scapegoat 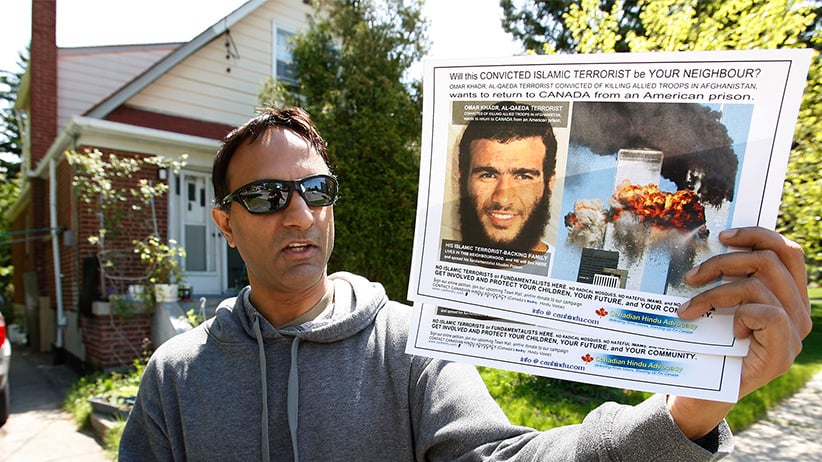 In the 19th century, there was a tribe that lived along the Niger River. When their king saw his people were frightened by an invisible evil, such as a plague, he would send men into the interior to purchase and deliver to him a “sickly person.” This poor soul was dragged face downwards from the king’s house on a height, down some distance to the river’s edge. The townspeople followed, taunting the victim and crying, “Wickedness! Wickedness!” Then they drowned him in the river. As soon as their sacrifice stopped struggling, the people would cheer, as they believed their terrors died with him.

This spectacle was not unique. In Thailand, people would choose a “debauched woman” to throw over the city walls. In the Caucasus, a slave was paraded through town, then stabbed in the heart with a spear. Leviticus records the ancient Jews would carefully anoint a goat and set him loose in the desert to die. All these rituals had the same purpose: to ward off an undefined evil.

The ceremony of the scapegoat is deeply woven into the history of every culture. It is an elemental part of humanity: the need to make an invisible threat tangible, then to destroy it. This ritual survives today—less dramatic, but just as tribal, emotional and irrational.

I don’t remember when I first saw the name Omar Khadr. As a Canadian diplomat tracking South Asia, I knew of his father and remembered prime minister Jean Chrétien clumsily assuring the Pakistani government that he posed no threat. Later, after 9/11 and the invasion of Afghanistan, the Khadr name returned to me in intelligence briefings. There weren’t many Canadians running around with al-Qaeda, so, naturally, attention was paid.

In 2002, when U.S. Special Forces captured the 15-year-old, I vividly recall the feeling of justice being served. There were some grumblings about his age, and that he was a child soldier. But this was easy to dismiss as the mewling of the weak-kneed left, unwilling to stomach the hard reality of this new war on terror.

When I first saw a photo of Omar Khadr, it raised a small doubt in my mind. This was obviously a child; surely, he couldn’t be such a serious threat? But I pushed the thought away, which was easy to do, given his mother’s regular outbursts of hate. I would privately tell journalists they couldn’t see the bigger picture. I hinted that the classified reports on Khadr painted an unambiguous picture. He and his family were evil. As the boy was dragged through the media and into Guantánamo, I walked behind and whispered “Wickedness. Wickedness.”

After the Conservatives were elected, they treated Khadr with the same disdain as their predecessors. Liberals such as Irwin Cotler did gnaw at my conscience, when they raised questions about the lack of due process. But my biases overcame my doubt and I breezily dismissed them as hypocrites.

The years passed. We watched as Khadr grew up in detention, buffeted by the pseudo-judicial circus of American military tribunals, then punished by the Canadian government with increasingly petty bureaucratic and legal gambits. At some point, I noticed there were fewer voices baying for his blood, and I, too, stopped defending his imprisonment.

Time grinds down even our most self-righteous beliefs. Ironically, the more I travelled and worked in Afghanistan, Iraq and Pakistan, the less I saw terrorism as an intangible and existential threat. It was real enough, and recognizable. And it was not Omar Khadr.

Regular opinion polls over the last decade suggest the majority of Canadians disagree with me. Like the Conservative party, they do not see Khadr as a boy whose childhood was stolen by his father, and punished beyond all balance as a symbol of a wider evil. They see the very embodiment of terrorism, a fanatical killer, throwing grenades at medics.

I could argue the facts. I could point out we violated a treaty on child soldiers that Canada itself helped to draft. I could explain in detail all the different ways Khadr was denied due process by the American and Canadian governments. I could give you all the legal rulings, even from the Supreme Court itself, that side repeatedly with Khadr. I could share data on his extremely low likelihood of recidivism. I could detail the conflicting testimony that casts doubt on whether Khadr even threw that grenade.

But, for many of those who agree with the government’s effort to obtain an emergency stay of an Alberta judge’s decision to grant Khadr bail, none of that matters. The ritual of the scapegoat is not rational. It comes from the deepest part of our brain that is filled with an undefined dread at the pervasive threat of terror, and demands blood.

The next time a Conservative politician stands up in Parliament, shouting and gesticulating as he thunders in righteous fury at the evil that is Omar Khadr, watch closely. And recall anthropologist Sir James Frazer’s description of shamans as they prepared their scapegoat for sacrifice by “beating the empty air and raising such a hubbub as may scare the mischievous spirits and put them to flight.”