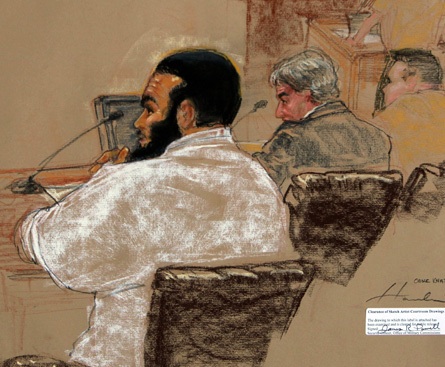 After seven long years in captivity, Omar Khadr is finally leaving the notorious U.S. prison camp at Guantanamo Bay, Cuba. But he is not a free man. Not yet, at least.

In the latest chapter of the endless Khadr saga, the White House announced today that the 23-year-old Toronto native will be transferred to an American jail cell to face trial on U.S. soil. Exactly when he will arrive, or where he is going, has yet to be decided, but one thing is clear: despite his tender age, his celebrity supporters, and questionable evidence, the Americans still consider Omar Khadr a murderer.

However, as with all things Khadr, there’s a twist: while announcing the surprise transfer, U.S. Attorney General Eric Holder also left open the prospect that Khadr, a Canadian citizen, could be sent home before his trial ever begins—fuelling suspicion that if Ottawa simply asked for Omar’s return, the U.S. would happily oblige. When asked about that possibility, Holder told a Washington press conference: “We will, as that case proceeds, see how it should be ultimately treated.”

At the heart of all the uncertainty is a separate hearing in front of the Supreme Court of Canada, which is considering whether Prime Minister Stephen Harper should be forced to at least ask the U.S. to send Khadr home. Simply put, two lower courts have already ruled that the federal government violated Khadr’s Charter rights in 2004, when he was grilled by visiting Canadian officials at the Gitmo facility even though they knew he endured three weeks of sleep deprivation leading up to the interrogation. To compensate for that Charter breach, the Federal Court ordered Ottawa to seek his repatriation.

The Harper government appealed the judgment—twice—claiming that the business of foreign affairs belongs to elected officials, not the courts, and that the feds have no legal duty to lobby on behalf of every citizen arrested abroad. “We’re in the realm of diplomacy here,” federal lawyer Robert Frater told the Supreme Court justices this morning. “The government has the right to decide what requests should be made, how they should be made, and when they should be made. The courts are not in the best position to do that.”

The stakes could not be higher. During all the years Khadr has been locked away at Guantanamo Bay, Ottawa has never once—not under the Liberals, and not under the Conservatives—asked the United States to send him home. The feds have simply stuck to the same old talking point: Khadr is facing serious charges in the U.S., and we respect the American justice system. But if the Supreme Court sides against Ottawa in the coming weeks, Harper can no longer hide behind those words. He will be forced to ask for Khadr back—and if Holder’s latest remarks are any indication, the White House just might say yes. It’s a scenario the prime minister is desperate to avoid (his government has already spent more than $1.3 million in legal fees fighting Khadr at every turn).

The son of a senior al-Qaeda fundraiser, Khadr was famously shot and captured by American troops during a 2002 firefight in Afghanistan. Just 15 years old at the time, he was shipped to Gitmo and later confessed to throwing a grenade that killed Sgt. Christopher Speer, a decorated U.S. army medic with two young children. But in the years since, human rights groups and the Canadian Bar Association have rallied to the teenager’s defence, claiming his confession was the result of incessant torture and insisting that he cannot be held responsible for his actions because he was technically a child soldier. Should he ever return to Canada, Khadr would no doubt receive a hero’s welcome at the airport.

But if that day ever comes, it is federal authorities that will have to figure out what to do with him. It is a no-win situation, to put it mildly. Charge him under Canada’s anti-terror laws, and the case is certain to flop. What jury would convict a 15-year-old boy who was clearly following the orders of his radical father? The other option—reuniting him with his extremist family, where he is sure to become an inspiration for wannabe Toronto 18s—is no less nauseating. This is a family, remember, that is under constant police surveillance. Omar’s sister had her laptop seized by the RCMP; his older brother, an alleged al-Qaeda gunrunner, is facing extradition to the U.S.; and every other accused terrorist in Canada seems to count the family among their closest friends.

It’s no secret why Stephen Harper is fighting to keep Khadr in U.S. custody.
For now, at least, he will get his wish. Khadr is among ten high-profile detainees who will be flown to the U.S. to face American justice, including the Sept. 11 mastermind, Khalid Shaikh Mohammed. The accused 9/11 plotters, five in all, will stand trial in a Manhattan courthouse, just blocks from where the Twin Towers fell, while five others, including Khadr, will have their fate decided by a U.S. military commission. President Barack Obama originally cancelled the Bush-era commissions during his first week in the White House, but he has since reinstated them, with new rules governing due process. Hearsay evidence, or evidence gleaned from torture, will not be admissible.

To Khadr’s defence team, those assurances ring hollow. “We thought that the incoming Obama administration signaled a new day with respect to these cases—a new respect for civil liberties, an abhorrence of torture, a respect for the time-honoured legal procedures and protections that are mandated by the constitution and enforced by the federal courts,” said Barry Coburn, one of Khadr’s American attorneys, who was in Ottawa today for the Supreme Court hearing.

Dennis Edney, Khadr’s long-time Canadian lawyer, said at the very least, the military commission is preferable to an American civilian court. “He would be dead in the water, just because of the climate of terrorism in the United States,” Edney told Maclean’s. “You could almost say the best thing that could happen to him is to stay within the military commission process, because at the end of the day, a military jury understands the law of war. They understand a young kid involved in a battle that lasted minutes—and then spent the next seven years at Guantanamo.”

Layne Morris, a retired Special Forces sergeant, lost an eye in the 2002 ambush that ended with Khadr’s capture. He doesn’t particularly like the idea of Omar landing on American soil, but if it means he will finally stand trial, he supports it. “I have a responsibility to seek justice in this case on behalf of a lot of people,” says Morris, who stays in touch with Sgt. Speer’s widow, Tabitha. “But I’ve got absolutely zero problem if he goes to a military tribunal and they say: ‘Alright, you’re sentenced to time served.’ I don’t care. I’m more concerned about the security. Regardless of how many years you give him, are we confident that we can let this guy go and he’s not going to be trying to cut people’s throats next week? That’s the overwhelming question.”