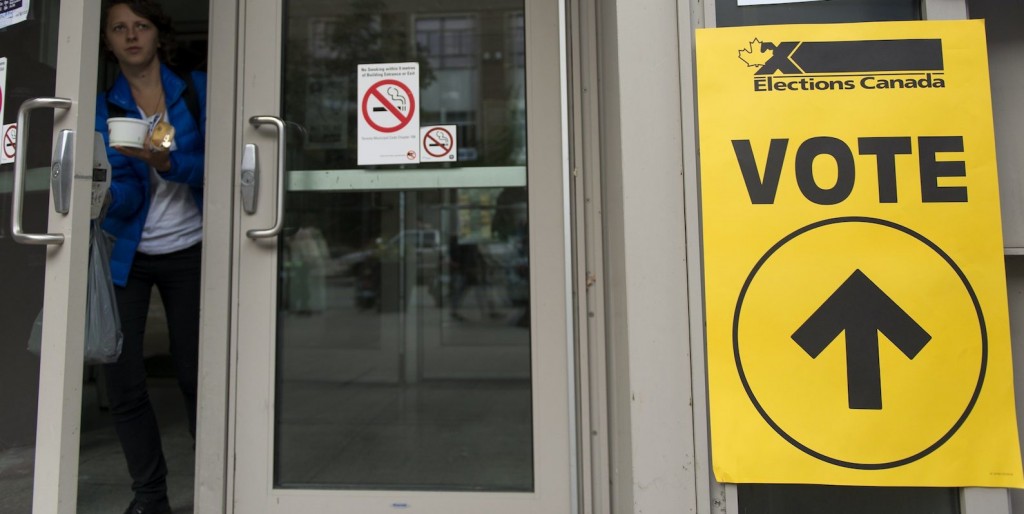 Elections Canada set up advance polling stations on the second floor of the Ryerson Student Centre at Ryerson University in Toronto, Wednesday, Oct, 7, 2015. Opening polling stations on university campuses is a great way to boost the youth vote, several students said Wednesday.Under the pilot project by Election Canada, people have been casting ballots at more than three dozen campuses across the country. THE CANADIAN PRESS/Marta Iwanek

OTTAWA – Liberal members of a special all-party committee on electoral reform are urging Prime Minister Justin Trudeau to break his 2015 promise to change Canada’s voting system before the next federal election.

That remarkable call for inaction came Thursday even as opposition members of the committee joined forces to put pressure on Trudeau to keep the campaign commitment.

In its long-awaited final report, the opposition-dominated committee recommended that the government design a new proportional voting system and hold a national referendum to gauge whether Canadians would support it.

It could all be done in time for the next election in October 2019, opposition MPs maintained. NDP democratic reform critic Nathan Cullen called the majority report “historic.”

But Cullen also acknowledged the “strange scenario” that seems to be developing, with “the Bloc Quebecois, the Conservative party, the NDP and the Greens finding enough room for consensus to help the Liberals keep a Liberal promise and the Liberals not so interested in it anymore.”

In a “supplementary” report, the committee’s Liberal members said Canadians have not been sufficiently engaged in the issue and expressed deep misgivings about holding a referendum to measure public opinion on the subject. They recommended that the government undertake “a period of comprehensive and effective citizen engagement” before proposing any specific voting system, all of which they said “cannot be effectively completed before 2019.”

“We feel it would be irresponsible for the government to act in haste just to meet the 2019 deadline,” Liberal MP Matt DeCourcey told a news conference shortly after the report was tabled in the House of Commons.

But it was Trudeau himself who set what his MPs now view as an arbitrary deadline. Before, during and after the 2015 federal election he repeatedly promised it would be the last to be conducted under the first-past-the-post voting system.

The Liberal members’ conclusion is consistent with the government’s apparent loss of interest in electoral reform.

Trudeau has suggested that public enthusiasm for electoral reform has waned since his Liberals won power last fall. His democratic institutions minister, Maryam Monsef, has repeatedly said she’s detected no consensus around any particular alternative and has warned that the government won’t proceed without the broad support of Canadians.

“The only consensus that the report found was that there is no consensus on electoral reform,” she charged, accusing the committee of taking “a pass” on making the “hard choices.”

Monsef has conducted her own hearings and is about to launch a postcard campaign inviting all Canadians to take part in an online survey. She’s openly disparaged the idea of holding a referendum to measure public opinion, citing the cost and potential divisiveness.

On Thursday, she dismissed the opposition-driven majority report for wanting to hold a national vote on “an incomprehensible formula” for measuring the degree of proportionality of a voting system. And she dismissed the united opposition front on the issue, noting that both the NDP and Greens expressed reservations about a referendum in their own supplementary reports.

The NDP and Green members agreed to drop their opposition to a referendum in order to win Conservative and Bloc support for a proportional voting model.

The majority report acknowledges that the “overwhelming majority” of testimony the committee heard from almost 200 electoral experts and thousands of interested Canadians was in favour of proportional representation.

And it says most of those PR advocates favoured a mixed-member proportional system, in which MPs would be elected in each riding just as they are currently, supplemented by additional regional MPs chosen from party lists and apportioned according to each party’s share of the vote.

In the end, though, the report does not recommend a specific proportional voting model. It does say that whatever model the government designs should score no more than 5 on the so-called Gallagher Index — a mathematical formula for measuring the degree of disproportion between the share of votes received by parties and their share of seats in the legislature.

The lower the score, the more proportional an electoral system is deemed to be.

Interim Conservative leader Rona Ambrose accused Monsef of insulting the intelligence of Canadians and Green party Leader Elizabeth May accused her of “disrespecting” all committee members.

But Liberal committee members also questioned the use of the Gallagher Index. Committee chair Francis Scarpaleggia said a voting system that scored less than 5 would require many more MPs or ridings that would be three or four times larger than they are now — neither of which he believes Canadians would want.

While the majority report doesn’t recommend a specific model, May said it does narrow the scope of the government’s options. For instance, it says any new system should not involve MPs being chosen from closed lists supplied by the parties, thereby severing the connection between voters and their MP.