On pipelines, Horgan and Weaver can do little but posture

If anyone blocks the Trans Mountain Pipeline expansion, it will be Indigenous and environmental groups equipped with court writs 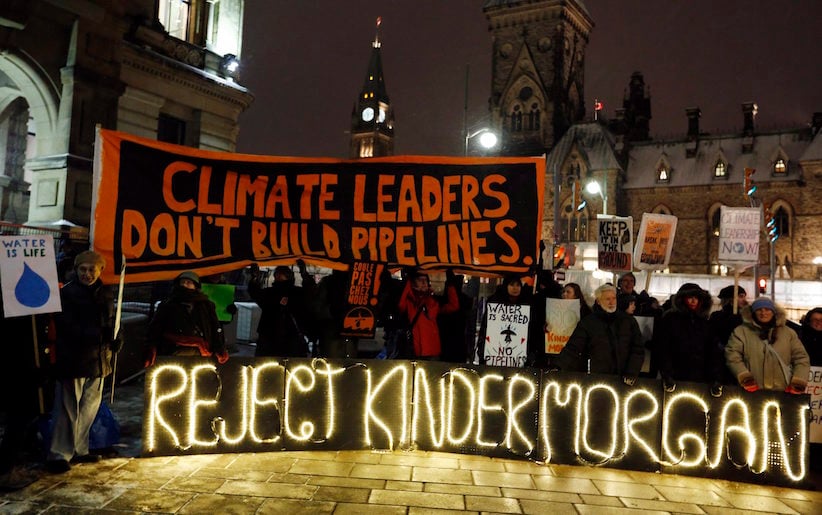 To get a real sense of how determined and confident British Columbia’s incoming NDP-Green alliance is that it will kill the federally approved Kinder Morgan pipeline, look directly above that menacing line in the parties’ pact that vows to “immediately employ every tool available to the new government to stop the expansion.”

The agreement’s previous line contains language to thwart a project the NDP and Greens dislike, the Site C dam. Here, the parties can actually enunciate the delay tactic: ordering the B.C. Utilities Commission to study the hydroelectric facility’s economic viability. That’s a plan; the “every tool” vow is the sort of vague finger-wagging NDP leader John Horgan did during the campaign, while declining to reveal the contents of this toolbox.

When the man who will make Horgan premier, Green leader Andrew Weaver, tried to knock down the Alberta premier’s warnings there are few ways a province can imperil this pipeline project, he told reporters that Rachel Notley should look at Section 35 of the Constitution Act. That’s the section on Indigenous treaty rights, and the underpinning of a dozen of the 19 lawsuits standing in the way of the Trans Mountain pipeline expansion. In other words: a challenge the diluted bitumen conduit would face whether the premier were Horgan, Christy Clark or Michael Bublé.

If the B.C. New Democrats and Greens wanted to be specific about how their government could attack the Edmonton-to-Burnaby pipeline twinning–or were confident about how to, or truly prioritized it over other projects–they could have laid out more details. Tuesday wasn’t a day for details, though. On the day Clark all but admitted her 16-year-old government had been slain, it was time for the victors to thrust sabres in the air, and perhaps give a hokey-pokey and shake them all about.

The most consequential response was that of the decision-maker on interprovincial pipelines, the federal government. Prime Minister Justin Trudeau made his decision back in November, and will evidently stand by it: “Regardless of a change in government in British Columbia or elsewhere, the facts and evidence do not change,” he said Tuesday in Italy. How far Trudeau’s willing to go to assert federal jurisdiction may depend on how much obstruction Horgan and Weaver throw up; there’s no real need to resurrect his father’s “just watch me” schtick just yet—as much as Alberta New Democrats and jittery markets may wish he would. Kinder Morgan Canada’s initial public offering on Tuesday raised $1.75 billion toward the pipeline’s anticipated construction launch this fall, but shares closed four per cent below their initial price.

Notley’s rhetoric was swagger reminiscent of the Alberta Tories she vanquished: “Mark my words: that pipeline will be built. The decisions have been made” (court decisions, though, are pending–this phrase could wind up in the company of Stephen Harper’s ill-advised remark that U.S. approving Keystone XL was a “no-brainer”). Both Notley’s opposition and the majority of her electors want her to remain steadfast against pipeline critics, and Alberta is intervening in legal challenges. She stressed the B.C. economy needs the construction jobs from the pipeline because “B.C. can’t grow solely on the basis of escalating housing prices in Vancouver and the Lower Mainland” (zing!). Notley went on to say energy sector jobs might tide over the B.C. economy if softwood lumber talks with the Trump administration go poorly (defeatist zing!).

Alberta’s premier, two years into her job and just as long from being a pipeline critic herself, also offered some elder-cousin advice to Horgan: “You’d be surprised how quickly the issue of ensuring that people have good jobs becomes front and centre to responsible governments that care about working people.”

Relations will be tense between the B.C. NDP and Alberta’s more centrist brand. Notley effectively banned government aides from campaigning in British Columbia this May because this major disagreement overshadows much policy sympatico; and the premier conceded Tuesday some aides may decamp to Victoria, though not many. Notley’s senior staff, many from B.C., will need to lean on their relationships; communications lately were similarly frozen, the premier’s top aides waiting with the public to see what the NDP-Green deal said.

Horgan delegated to Weaver the task of responding to Notley, which he relished. Why does B.C. need fossil-fuel projects for which demand may not exist, he reasoned; when its new government will pursue technology jobs with an innovation commissioner and a task force on emerging economies? “For Ms. Notley to tell British Columbia that somehow chasing the 20th century is the way for a future is not a good sign for her and her economy in Alberta,” Canada’s most powerful Green politician said. “Frankly, I think she should get with the program and embrace the 21st century as well.” Horgan smiled patiently during Weaver’s parry, then politely added something about rural forestry jobs.

RELATED: What the B.C. NDP-Green deal means to the rest of Canada

Still, aside from intervening itself in the court challenges to Kinder Morgan’s $7.4-billion project, there are a few more uncertain routes a Horgan-led government can pursue. The B.C. NDP could demand a new environmental assessment–the province merely abided by the National Energy Board’s own assessment, to the chagrin of environmentalists–but that isn’t easy under existing law, says Chris Tollefson, a University of Victoria law professor. There’s also the option of being strict and vigilant with the NEB’s numerous conditions for pipeline approval, and green groups would like to delay various permits the project would need.

British Columbians and Canadians don’t yet know what’s in Horgan’s purported toolbox, or whether he’s assembled one yet. The court challenges will be the bigger problem standing in the way of Trans Mountain and its plans to start pipeline work in September. In that arena, rhetorical sticks gripped by Trudeau and Notley won’t have much clout, either.