The motto to 'From sea to sea to sea' would acknowledge Canada's north, says one proponent. What do you think? Take our poll and let us know. 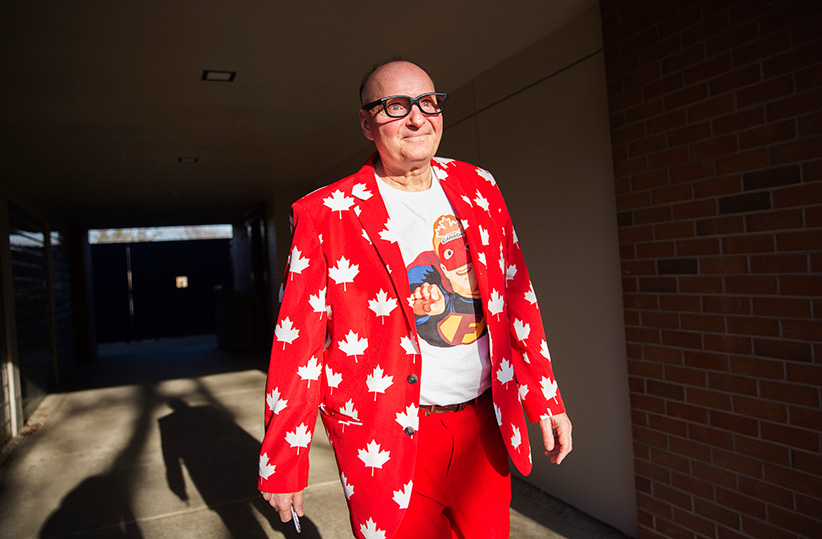 High school teacher Dave Suchanek, also known as “flag man,” poses for a portrait after teaching a class of grade twelve students at Appleby College in Oakville, Ont., on January 26, 2018. The 58-year-old has taken on various missions including fighting to rewrite a slogan on the Canadian Coat of Arms and ordering $400 worth of Canadian flags to stock his car so he can replace flags himself. (Photograph by Michelle Siu)

“I am legitimately sane.” Dave Suchanek prefaces his introduction this way because he harbours an alter ego who wears red pants, a maple leaf jacket and mask and drives around protecting Canadian heraldry. Most recently, he has contacted all 338 members of Parliament in his effort to rewrite the slogan in the Canadian Coat of Arms. “I’m like a dog on my bone,” Suchanek says. “Until I get my way, I’ll be a thorn in their side. Eventually someone’s going to say it cannot be done, and that’s like music to my ears.”

Suchanek is a high school teacher in Oakville, Ont. He is 58 years old (“going on 13”) and married to an occupational therapist. The slogan that he has made it his life project to change currently reads, “A Mari usque ad Mare,” Latin for “from sea to sea.” Suchanek believes these words on the Coat of Arms— which appears on paper currency, passports military badges and hangs in the Supreme Court of Canada—discount northern Canadians, so he wants the amendment: “A Mari usque ad Mare usque ad Mare” (“from sea to sea to sea”). The mouthful of a motto is not gaining momentum, but Suchanek is obsessed with making this sea change.

“Nobody got back to me,” he says of the parliamentarians. “For them it’s probably just a bowl of Cheerios. For me, it’s a beautiful sirloin steak.”

The slogan comes from the King James Bible: “He shall have dominion also from sea to sea, and from the river unto the ends of the earth.” Some historians credit former Liberal leader Michael Ignatieff’s great-grandfather, George Monro Grant, for inspiring the words for the coat of arms. In 1873, he published a book about the transcontinental railroad called Ocean to Ocean.

READ: The North and the great Canadian lie

Suchanek desires a better motto not because he’s from northern Canada (his parents come from Czechoslovakia and Denmark), but rather because he thinks the country deserves tri-sea recognition.

He is not alone. In 2006, Canwest News Services published a poll showing a majority of people supported a motto change, and Ignatieff told the news service that he would support the amendment as Liberal leader. That same year, NDP MP Dennis Bevington introduced a motion, supported by the premiers of Nunavut, Yukon and Northwest Territories, to do so. It was introduced again in 2009 with the backing of Ignatieff, who had by then won the Liberal leadership, but the change did not succeed.

Suchanek decided to take up the cause in 2009 in hopes of engaging his students with ﬁrst-hand stories of active citizenship, and for the sake of a challenge.

“My preference would be to leave it alone,” says Stephen Murray, secretary of the Royal Heraldry Society of Canada. “The way I read the motto, it actually was all the oceans.” A phenomenon in modern heraldry is the desire to include ever more symbols and words to ensure everyone feels included in coats of arms—“kitchen-sink heraldry,” as Murray puts it. “It opens up the door to ‘what about me?’ ”

Suchanek’s heraldic heroism began with flags. On a road trip to Prince Edward Island one summer, he was driving by a Ford motor plant with his family when he noticed the company was flying a tattered Canadian flag. “This is not right,” he thought, as he recalls. He contacted the owner, and by Monday, it was replaced. “That’s when I realized people care.” This November, he ordered $200 worth of Canadian flags to stock his car so he can replace flags himself. He designed a red-and-white costume and mask to wear on these missions and to amuse his students. “I am Flag Man,” he declares. “Canada’s only protector of polyester.”

Flag Man’s toughest mission has been to add an Ontario flag to his side of the Quebec/Ontario border on one highway. “I’ve been into it with the Ontario government for eight years,” he says. Entering Quebec, “you get a ‘bienvenue’ and a fleur-de-lis. On the Ontario side, you see this piece of cement with nothing else.” He went to Rona and costed out a $1,061 flag, but the province prohibited him from erecting it himself. “What if I did it in the middle of the night so no one would see?” he asked, to which he was told the authorities would just take it down.

After he took up the motto project, Suchanek contacted Brian Mulroney’s law ﬁrm in Montreal and says he received a letter of support. He now wants to create a survey for Canadians to ask about the change: “I haven’t ﬁgured that out yet, but I’m pretty sure I’ll be able to.”

A new slogan could go on the Canadian Coat of Arms if the Prime Minister decided, says Murray from the Heraldry Society. “Trudeau could just go to the Queen and say, ‘Your Majesty, we want this changed,’ ” he says. “She wouldn’t refuse.”