One Montreal borough's war on the car 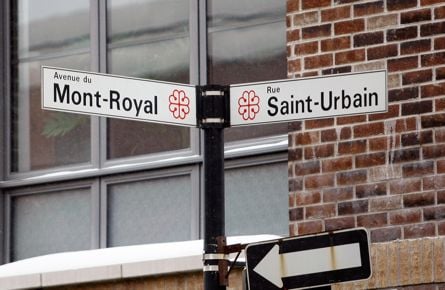 The Montreal borough of Plateau Mont-Royal is many things to many people: a formerly bohemian yuppie respite; a congenial melting pot of English, French and many other backgrounds; a trendy, boozy hotspot for tourists and university students. However, the eight square kilometers of this central Montreal burg is fast becoming known as something else: the scourge of the suburban driver.

Starting this fall, the Plateau will be home to what its administration calls “traffic calming initiatives” that will make driving through the neighbourhood a wee bit trickier. They include reversing the direction of certain streets, narrowing others, widening sidewalks, and installing a bevy of bicycle paths throughout.

The changes will make room for what Plateau mayor Luc Ferrandez describes as “secure, pleasant and user-friendly streets,” though these will come at the expense of convenience for commuters. That’s because the Plateau is a major thoroughfare for the vast (and ever-growing) suburbs on the north shore of Montreal—something Ferrandez, an avid cyclist, has watched for years with pursed lips.

His solution, which he has been working on since his upstart Projet Montréal party won last November’s municipal elections in the Plateau, is hardly piecemeal. It will make it near impossible for commuters to use the neighbourhood’s smaller, triplex-lined streets as de facto bypasses for the seven main north-south arteries. (Nearly 652,000 cars travel through the Plateau everyday, 83 percent of which are en route to somewhere else.)

“Since 1992, the city has been saying that something has to be done about the traffic, noise and pollution, and they did nothing,” Ferrandez says. “Everyone is convinced that small steps don’t work anymore. It’s time for a massive response.”

The three-pronged project includes making a large section of Laurier Ave., a main east-west route, one way. Currently, Parc Lafontaine Ave., which runs the western length of one of Montreal’s largest and most picturesque green spaces, cuts into the northern section of the park in a swooping curve that critics liken to a race course (Maclean’s can certainly attest to this phenomenon). Under the new plan, it will be squared off at Rachel Street with proper crosswalks.

The direction of Roy St. will be reversed from east to west in order to direct traffic to St-Denis Street, a designated main artery. Similarly, commuters looking to use a well-known shortcut along Christophe-Colomb—the tiny street is currently host to some 800 cars an hour during peak times according to traffic studies—will be stymied by alternating one way signs. Roughly 10 km of bike paths around the Plateau will be added in the process.

While he cites a variety of environmental and health concerns surrounding the use of cars, Ferrandez says one of the main issues is safety. Plateau-Mont-Royal, according to a Montreal Public Health Department study, has the highest number of traffic-related accidents per square kilometer on the island and the second highest per 100,000 residents. Projet Montréal’s plan is to keep traffic to the main thoroughfares, which will inevitably become all the more clogged. Which is exactly the point, it seems.

“The long-term plan is to get people to stop taking two tonnes of metal to work everyday,” says Projet Montreal’s Daniel Sanger. “The theory is that you don’t always make things easier for car traffic. In fact, sometimes you make it harder.”

Not everyone agrees. “I think they’re sick in the head,” says newspaper publisher and downtown gadfly Beryl Wajsman, a vociferous critic of anti-car initiatives in Montreal. “Most people drive everywhere, and that’s a good thing. It means they’re doing something. Cars are the economic engine of a city.”

Still, the plan has the support of Montreal’s Public Health Department. “It’s rare that we see something at such a large scale,” says Dr. Patrick Morency of the MPHD. “What’s interesting is that they are doing it all at once. We need more of this.”

It’s coming. Several surrounding neighbourhoods have made their main thoroughfares pedestrian-only during the summer, including parts of Ste. Catherine and Old Montreal’s St-Paul Street. Neighbouring Rosemont-Petite-Patrie is planning similar initiatives as those the Plateau is undertaking over the next year. And for years, Westmount, TMR and Outremont have used their own traffic-calming plans to confound drivers—albeit to a lesser extent than what the Plateau is planning.

These neighbourhoods are able to do so thanks to Montreal’s highly decentralized government structure, in which each of the city’s 19 arrondissements manages its own traffic plan and secondary roads. “We never could have done this if city hall was in charge,” says Ferrandez.

Ironically enough, the raft of pro-pedestrian plans in Montreal come just as two enormous highway projects are getting off the ground—projects that will greatly increase nearby suburbs’ capacity to funnel cars into the city from the north (and, inevitably, through the Plateau.) A recent Statistics Canada survey, meanwhile, suggested that while 68 percent of Canadians have ready access to public transportation, just over 40 percent use it.

It’s exactly the reason why Ferrandez laughs when people label him anti-car. “We’re never going to eliminate cars,” he says. “All we can do is stop the growth.” He even has a car himself, which he uses to go cross-country skiing.