Now what? Andray Domise on what’s at stake in the wake of powerful Canadian editors and columnists calling for an ‘appropriation award’ 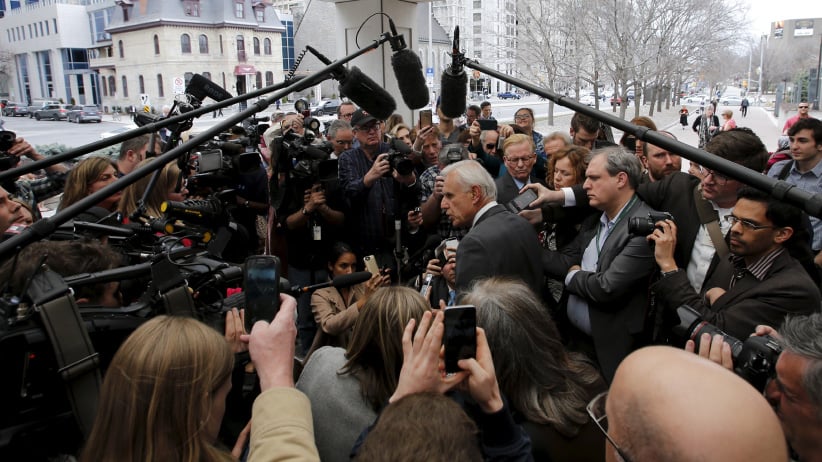 Over the last few days, during which multiple news panels and thinkpieces emerged on the limits, harm, and even merits of cultural appropriation, the overlapping worlds of Canadian literature and journalism seemed to burble over with the ugliness of a ruptured cyst. At a time when the lack of diversity in those fields has never been more apparent, a significant bloc of the media establishment chose to comport themselves in a way that was not only painful and embarrassing to watch, but provided a rather shameful object lesson. In the name of free speech, a significant number of prominent journalists said some very callous and hurtful things in public, raising the question as to how any two or three of them would talk about us if they got together in private, and if that might have something to do with the near-uniform whiteness of our trade.

The meekest among supporters of Hal Niedzviecki, formerly of Write Magazine—who cavalierly encouraged writers to seek “The Appropriation Award” in an issue about Indigeneity—and Jonathan Kay, formerly of the Walrus, bemoaned their colleagues being hounded out of their jobs by the assembled forces of social justice warriors, and then on Thursday night, answered former Maclean’s and National Post editor-in-chief Ken Whyte’s call for an actual appropriation prize with offers of their own money. It was a dropping of pretense; in their defence of “free speech,” those journalists openly antagonized Indigenous writers, artists, and activists.

Those more heavily aggrieved chose go on the offensive. Among them were Barbara Kay, as though a malevolent wraith drawn to the thick stench of acrimony, spent Mothers’ Day wondering aloud on Twitter why those with positive experiences in residential schools have not been given a platform. (As a side note, if Kay had chosen to read the Truth and Reconciliation Commission’s report, as pointed out by the Winnipeg Free Press’s Melissa Martin, she would have found her answer beginning on page 185, in a chapter entitled “Warm Memories”).

And then, of course, there was the public participation of senior staff from Maclean’s, and its parent company Rogers, in this mess. Alison Uncles, who is the editor-in-chief at Maclean’s, was among those to chime in for Whyte’s Appropriation Prize, tweeting: “I’m in. $500 for freedom of thought and expression. Just me though, not Maclean’s.” Steve Maich, senior vice-president of digital content and publishing for Rogers Media, tweeted “I’m in,” before adding, “I should say that I am donating of my own accord. I wouldn’t presume to speak for Rogers.”

If only it were that easy.

MORE: On diversity, Canadian media is throwing stones in a glass house

When Alison asked me to write for Maclean’s nearly a year ago, while she was deputy editor, one of the first things we discussed was the historical blind spot this magazine has had towards the way race is lived in Canada. Based on a few of my tweets about the killing of Alton Sterling and Philando Castile, Alison and I had a conversation about ways that systemic racism might be countered with systemic solutions. I later summarized some of my ideas into an article. But our talk went beyond public indemnification of police brutality.

I talked with Alison about the personal pain it caused me to see Black people gunned down, beaten, and strangled to death at the hands of the very same people pledged to protect the lives of civilians. I once held the hand of Jermaine Carby’s mother in her living room during an interview, and the manner of our meeting has left an ugly spot inside my soul. Jermaine’s mother, it turns out, is a distant relative only introduced to me after a Peel police officer shot her son dead on a roadside.

I opened up this side of myself to Alison, this person I hardly knew, to explain why writing about Black lives was far more than simple point-scoring on a social debate. “Black Lives Matter” is far more than a slogan to me; it’s a plea for my humanity, and that of people born into a world that fears, fetishizes, and mortifies our Black skin.

I explained all of this to a person who would, less than a year later, pledge $500 out of her own pocket to whoever can most cheekily consume and regurgitate someone else’s culture.

In a column that I wrote last week about Desmond Cole’s departure from the Toronto Star, I said of my liberal white colleagues in the Canadian media: “[The] hand offered in support may later be the one to slap us in the face.” I meant every word of it. Because, whether or not they intend to, they will remind us of who we are, who they are, and who exactly holds the power in our relationship.

I say this knowing my position in the field is flexible: I write for Maclean’s on a weekly basis, but I am a freelance columnist, not a Maclean’s employee. At any point, Maclean’s can decide that my services are no longer needed. Likewise, I can decide that my work in writing has concluded. I have a day job, meaning the worst outcome for me is that I have less writing income and more free time.

But what of a journalist student of colour, or an Indigenous student, who dreams of joining Maclean’s one day? At a time when most publications have acknowledged that diversity in Canadian media badly needs addressing, what message does it send to the next generation of journalists—who bring a range of cultural and life experiences to bear in their work—that their managers and senior colleagues publicly take a position that implies their concerns are barely worth even scoffing at? Or worse, if they choose to take their talents elsewhere, their influential colleagues believe in earnest that white men invented and exported the concepts of freedom, equality, and the law to the rest of us mud people?

There’s another consideration: My writing niche normally puts me in close proximity with people of racialized and marginalized backgrounds. In order to do my job, I need to be able to speak with people from various walks of life, and I need their trust that their views will be fairly and accurately represented. Given that Maclean’s is a national publication, and read globally, this requires a very high degree of trust. When senior staff at this magazine participate in a “glib” joke that was both harmful and painful not only to myself, but people I’ve interviewed—or would like to interview—that trust is eroded.

My job is more difficult when I’m placed in the awkward position of asking interview subjects to trust me in spite of the people I answer to. I’ve already had one Indigenous writer comment to me that Maclean’s wouldn’t be the venue for him to participate in this conversation, and another tell me they wouldn’t be comfortable with being interviewed on this matter, and possibly in the future. This is not a good look for an industry nourished by captivating stories and voices.

I have no idea what happens next.

Over the weekend, I spoke with Alison a few times on the matter. In addition to tweeting an unreserved apology, she and Steve have apologized to the newsroom. I have no capacity (or desire) to absolve anything on their part; I was genuinely hurt by what they said, and I’m far from the only one. I do, however, have both the capacity and desire to forgive, as well as give them the space to rebuild the trust that was broken. But that’s a very personal choice, which should absolutely not serve as an example for anyone else to follow.

At the very least, the journalists who participated or have strong feelings about this debacle should be able to admit that a rider comes along with free speech: the responsibility to discern. Those of us who form the vast minority in the workplace know this acutely; we’re used to choosing our words and actions in a way that doesn’t cause unnecessary offense. If demographics in this field were different, and the majority of journalists were Indigenous, I highly doubt the conversation would have gone this way. But the current demography in journalism—for which there is no accurate data, which is itself telling—in my opinion, is why we keep repeating it.

And I think this may be a place to start. Journalism thrives on information, and on transforming data points into intriguing stories. What, then, does the industry have to hide? An annual report breaking down the demographics of media organizations and newsrooms is a small, yet significant step to take. My suggestion, and my challenge, would be for every news and media organization in Canada to collect data on the workplace, and share that data with the public.

In Canada, there are a homogenous few who have enough power to decide which stories are told. If they can’t expand their listening and shrink their egos enough to allow the rest of us some room? We can safely put away “cultural appropriation” as the reason why, as Hal Niedzviecki himself remarked, the industry remains this exhaustingly white.

CORRECTION: Outdated information led Maclean’s to believe Robert Sibley was an Ottawa Citizen columnist. He is, in fact, a former columnist.