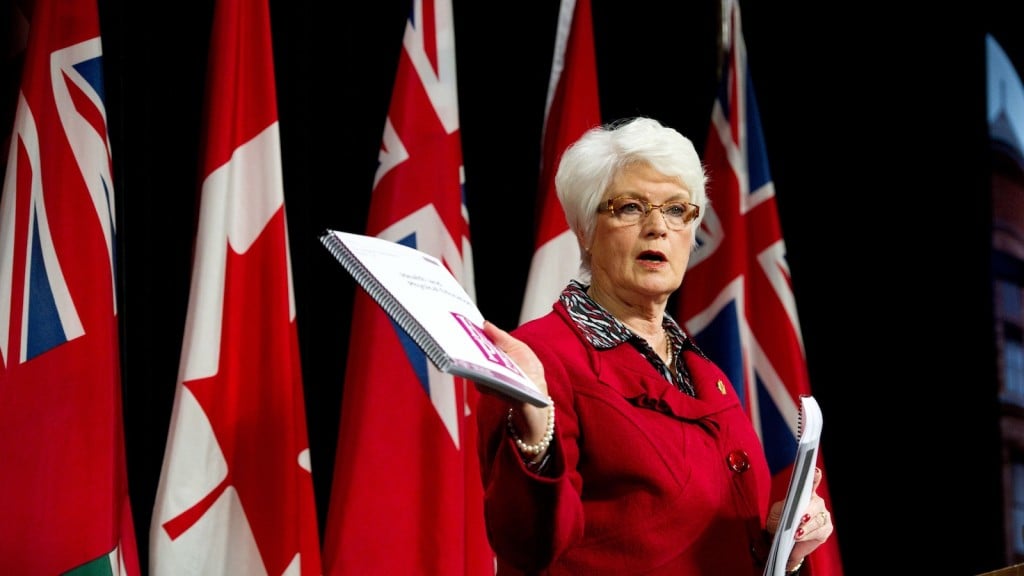 But she says Mulcair has not provided sufficient details of his plan — which would require provinces to pick up 40 per cent of the tab — to determine whether Ontario would be prepared to buy in.

Moreover, Sandals says Ontario has already spent billions on child care and full-day kindergarten and those investments would have to be recognized “in full” in any national program requiring matching provincial funds.

Related: Read our in-depth primer on child care, and 11 other election issues

If Ontario and other provinces were to insist that money already being spent on child care be counted as part of their matching share of a national program, that could significantly reduce the number of new spaces Mulcair is promising to create.

“While the federal NDP like to claim Ontario supports their plan, they have yet to provide Canadians with any details for their proposal, including how it would impact Ontario families,” Sandals said in an email to The Canadian Press.

“As it stands, the proposal put forward by the federal NDP leaves a lot of unanswered questions.”

New Democrat MP Peggy Nash said Sunday that Mulcair has plenty of experience as a provincial cabinet minister in Quebec and realizes there’s no “one size fits all” approach to the issue.

“Tom will engage with the provinces, recognize their unique needs, take their existing programs into account and ensure long-term, predictable funding so provinces and communities can plan ahead,” she said in an email.

Ontario’s view of the NDP child care proposal was thrown into question Saturday after Liberal MP John McCallum predicted Mulcair’s plan will never materialize because provinces don’t have the money to contribute their share of the program, which he pegged at $3.3 billion.

“Where are the provinces going to come up with $3.3 billion? I come from Ontario. Ontario has a significant deficit. Ontario would have to come up with a billion dollars-plus per year,” McCallum told a news conference.

“If the provinces don’t come up with the money, there won’t be any child care spaces.”

Mulcair shot back that the Liberals failed to deliver a national child care program after promising it for 13 years and are now frustrated that the NDP plan is receiving such positive reviews.

“We have the clear understanding of even provinces like Ontario (where) Premier (Kathleen) Wynne has said that she likes our plan,” Mulcair said.

Related: Political pandering is everywhere. Even beyond the usual suspects.

Mulcair is proposing over eight years to create one million child care spaces that would be accessible to parents for $15 a day, regardless of income. The federal government would pick up 60 per cent of the cost, which the NDP estimates would cost the federal treasury $5 billion annually once fully implemented. The provinces are to pay 40 per cent of the tab.

The NDP says Manitoba, British Columbia and New Brunswick have signalled a willingness to negotiate a shared-cost child care program.

However, a spokesperson for the B.C. government said Sunday that the province is taking no position on any federal party’s election campaign proposals and will work with whomever forms government on Oct. 19 to do what’s best for British Columbians.

Wynne, who has been actively campaigning for Liberal Leader Justin Trudeau in the federal campaign, signed onto a letter from all premiers to Prime Minister Stephen Harper just last month, in which the provincial leaders called for federal “supports to families such as affordable, quality childcare.”

Moreover, Wynne’s Liberals supported an NDP motion in the Ontario legislature last fall calling on the province to “partner with the federal government to ensure every parent in Ontario has access to child care at a cost of no more than $15 a day per child.”

Related: Trudeaumania with a mean streak

But Sandals said that motion included no specific details on how such a program would be funded.

She said Ontario has gone from spending $530 million annually on child care to more than $1 billion while creating 130,000 new day care spaces. Moreover, she said 470,000 children are benefiting from the provincial government’s introduction of full-day kindergarten, without which every one of those kids would need child care.

“We expect that any funding for child care that requires provincial matching would recognize these commitments in full,” Sandals said.

Asked whether Ontario might refuse to ante up any further funding on the basis that its existing investments already amount to its 40 per cent share of the NDP’s proposed program, Sandals said: “I cannot speak to specifics that haven’t been shared in the NDP proposal.”

However, Mulcair might have no choice but to give Ontario, or any other province, its share of federal funding whether or not it puts up an additional dime of its own.

Under the NDP’s 10-year-old policy on Quebec, known as the Sherbrooke declaration, the party has adopted the principle that provinces should be allowed to opt out of federal programs in areas of provincial jurisdiction — such as day care — with full compensation.