When people don't understand how government works, it gives rise to the politics of resentment. Why Ontario's civics course is so important 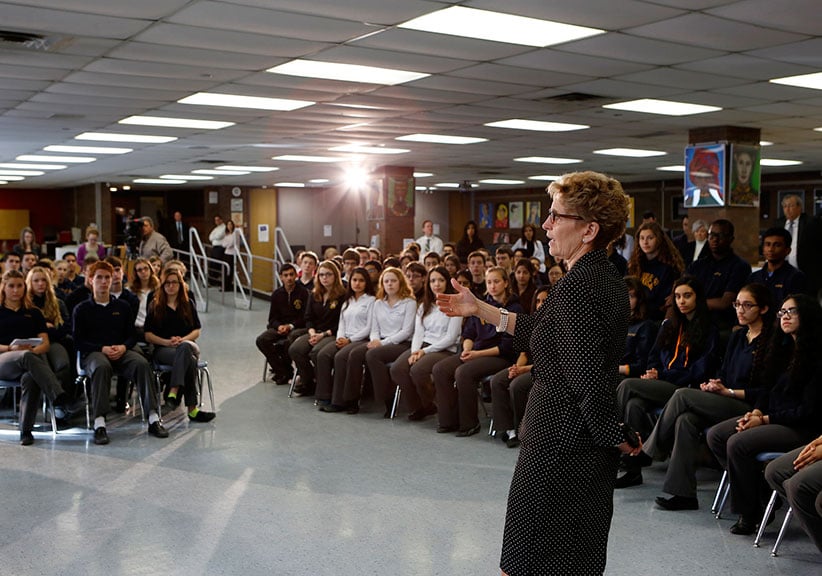 Premier Wynne visits students at Michael Power St Joseph High School to discuss the importance of education and takes questions from students. The province is considering the removal of a mandatory civics class. (Ontario Liberal Caucus)

UPDATE: Since this story was published, Ontario’s minister of education, Mitzie Hunter, has said the province will not remove the mandatory civics course. See her full statement here.

As the government of Canada tries to educate and prepare the public for electoral reform, Ontario’s Ministry of Education is quietly floating the idea of removing the province’s mandatory civics course as a requirement for its secondary school diploma. Currently, Ontario is the only province with a compulsory course promoting civic literacy and active citizenship, and the very idea of jettisoning it while the rest of country considers changing the way it will elect future governments is absurd.

“When reliable sources first tipped us off about this development in the ministry we were shocked,” explained Jan Haskings-Winner, past president of the Ontario History and Social Sciences Teachers’ Association (OHASSTA). The plan would see civics replaced with a full credit in careers. “It calls into question the very purpose of public education. As educators, are we merely creating good workers with employable skills, or are we challenging students to be active citizens in a strong and constantly evolving society?”

In a email response to Maclean’s, ministry spokesperson Heather Irwin confirmed the future of the civics course could be in doubt because of a review of its career-studies course curriculum. “The timing and credit value (currently 0.5 credit) of the career-studies courses are part of this review, which may have implications for other courses, including the complementary 0.5 credit civics and citizenship course,” Irwin said. “No decisions have been made, however it is important to note that civics and citizenship will remain a mandatory part of the Ontario curriculum. The ministry will continue to work with educators, parents and students to inform next steps in curriculum review.”

However, it remains unclear how much time students would spend studying how their country is run in a curriculum that is already overloaded. Broad concepts of active citizenship must be married with a guided exploration of the institutions that make our democracy work—something only a specific course like civics can provide.

Needless to say, this is a troubling development. “Ministries of education should realize that when people don’t understand how our system works, it gives rise to the politics of resentment, which has fuelled much of the American election cycle,” warns Dale Smith, parliamentary journalist and author of the forthcoming book The Unbroken Machine: Canada’s Democracy in Action.

As it stands the national statistics are bleak: less than half of Canadians know how the prime minister is selected, and even fewer know can name our head of state. Except for a blip in the last federal election (68.5 per cent voter participation), voter turnout is in overall decline across the country and in every jurisdiction (particularly in municipal elections, where it can hover around 20 per cent). From 2005 to 2013, the Ontario Ministry of Education itself was incorrectly stating in its curriculum document that Parliament consisted of “the sovereign’s representative, the Senate, and the House of Commons” (Parliament consists of the Queen, Senate and House of Commons). As it stands today, due to the criteria of the citizenship test, new immigrants to Canada have a far better understanding of our system of government than people born and raised here.

Currently, civics in Ontario is taught at the Grade 10 level as a half-credit program paired with the deeply unpopular careers course (a course focused on preparing students for the workforce). It is in civics, crammed into nine short weeks, that students are taught the fundamentals of our democracy, its institutions, and civic responsibilities. An emphasis of the course has always been to foster “active citizens.”

The foundation of a robust democracy is an educated and active electorate. Rather than be abandoned, Ontario’s civics course needs to be appreciated and enhanced. Similarly, the nine provinces and three territories that currently don’t ask their students to actively explore their systems of government need to start doing so. As one Grade 11 student put it, “Civics is the only class where I never asked myself, ‘When will I need to know this?’ ”

Nathan Tidridge has written several books on the Crown’s relations with Indigenous peoples, including his most recent, The Queen at the Council Fire. Nathan has been teaching civics for 13 years as a high school teacher of Canadian history and government (waterdowncivics.org). Nathan was appointed to the Ontario Heritage Trust Board of Directors and the Prince’s Charities Canada Advisory Council in 2015. Follow Nathan on twitter (@tidridge), or visit his website canadiancrown.com. Follow OHASSTA on Twitter using @OHASSTA and #civicsmatters.

UPDATE, Nov. 3, 2016: The office of Education Minister Mitzie Hunter sent us a statement in response to this story, which we’ve posted in full below.

Across all classrooms in this country, Ontario is unique to offer a dedicated Civics and Citizenship course to our Grade 10 students and let me assure you we have no plans to remove this mandatory course from the curriculum.

Instead, our plans are to make it better by working with educators, experts and NGOs like Student Voice, an organization dedicated to increasing student involvement in our democratic systems, ­to keep this course relevant, informative and invaluable for our young learners.

In Ontario, students currently must take two half-credit courses in Grade 10 that focus on preparing our students for the world beyond the classroom. These courses are aptly referred to as Civics and Careers.

As Minister of Education, part of my mandate is to review these courses to make sure they are relevant for today’s youth. For Careers, we are taking steps to make sure this course provides students greater opportunities to chart their postsecondary path and strengthen their understanding in the topics of financial literacy, innovation and entrepreneurship. For Civics, we are looking at new ways to enrich students with the knowledge and understanding of Canada¹s democratic institutions. This means that discussions are underway about what these courses will look like in our curriculum. What this does not mean is that students are at risk of losing their Civics requirement.

The passionate outcry to protect the Civics course over the past few days was inspiring to me as a Minister of Education, but also as a member of the elected assembly whose main job is to serve the people who gave me this responsibility by casting a vote. Students have contacted my office and told me about how Civics inspired them to get involved in public service, to consider roles that enhance our freedoms and rights as Canadians, and for some very ambitious young leaders out there, I have heard about how this course has peaked their interest in one day having my job as a Minister of the Crown.

Ontarians should be proud that Civics exists only in our curriculum, and as other provinces take note of our focus on preserving, strengthening and making it better, I welcome feedback from educators, students and former students on the ways we can enhance both our Careers and Civics courses for years to come. It is a right and a freedom to be engaged in this very democratic discussion about education in our province, and keeping Civics in our schools is integral in shaping young people to become Canada’s next generation of engaged citizens.