Ontario energy minister says he never asked for a bribe 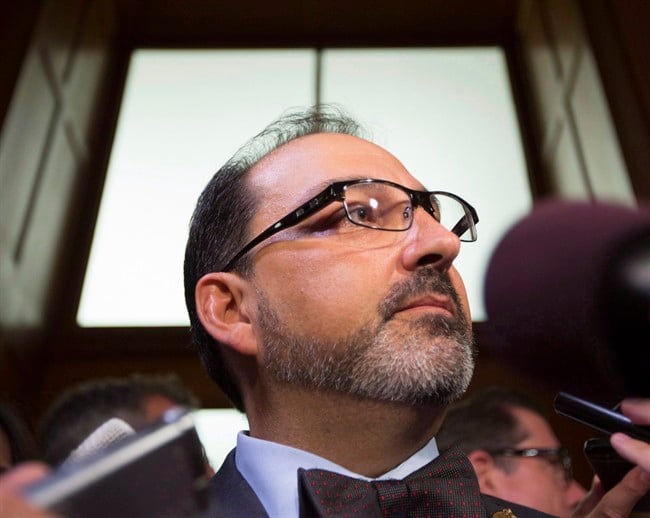 Ontario Energy Minister Glenn Thibeault arrives to speak with the media following the Speech from the Throne, opening the second session of the 41st Parliament of Ontario, in Toronto on Monday Sept. 12, 2016. A former MP who is now Ontario’s energy minister says he didn’t ask for “anything that would be seen as a bribe” in exchange for running in a byelection for the provincial Liberals. (Peter Power/CP)

TORONTO – A former MP who is now Ontario’s energy minister says he didn’t ask for “anything that would be seen as a bribe” in exchange for running in a byelection for the provincial Liberals.

The charges against the pair stem from allegations they offered a would-be candidate a job or appointment to get him to step aside in a 2015 byelection for Thibeault, who was the Ontario premier’s preferred candidate.

Federal prosecutor Vern Brewer said outside court that one of those charges — against the premier’s former deputy chief of staff — is over an allegation that Thibeault “sought certain benefits” as conditions to run provincially.

Thibeault was a New Democrat MP at the time and he ultimately won that byelection, then was promoted to energy minister earlier this year.

He says he never asked to be in cabinet, nor did he ask for the promise of a job if he lost the byelection, and says he is considering his legal options over Brewer’s comments.

Thibeault became emotional when discussing the scandal Tuesday after a question period filled with opposition calls for his resignation until the charges against Wynne’s former deputy chief of staff, Pat Sorbara, and Liberal fundraiser Gerry Lougheed are resolved. He said it has been difficult for his family.

“If anyone’s ever had to explain to a nine-year-old why you’re not a bad man, it’s not an easy conversation,” Thibeault said. “But I will not be resigning.”