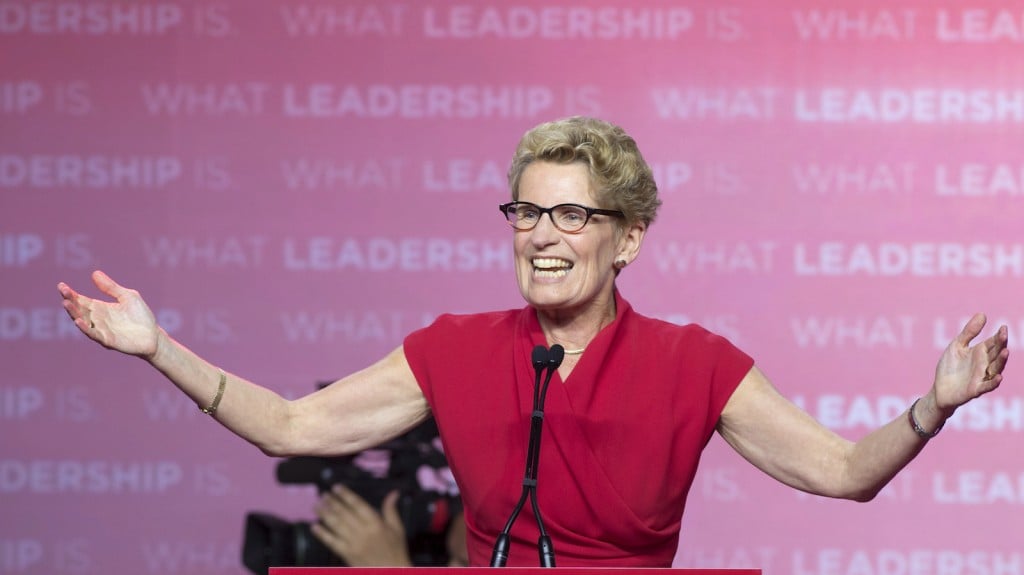 TORONTO – Ontario Liberals raised about $2.5 million at a big fundraising dinner Wednesday night that could be part of a waning tradition as the premier considers banning corporate and union donations.

Premier Kathleen Wynne said this week, following reports that her ministers have six-figure fundraising targets, some as high as $500,000 a year, that she plans to tighten rules on political donations this fall.

Following a speech to the more than 1,500 attendees at the Liberal Heritage Dinner, Wynne said she couldn’t provide any details of that plan because it isn’t yet complete, but she is looking to the federal model, which bans corporate and union donations.

“If we look at the federal system, what it means is that donation levels go way down and there are certain kinds of donations that aren’t allowed,” Wynne said.

“I don’t know whether it will be exactly what the federal rules are, but we will move in that direction.”

Wynne promised “movement” on that and changes to third-party election advertising – Ontario is the only jurisdiction in Canada, of those that regulate third-party advertising, that does not impose limits – before the 2018 election, but it’s likely not all the changes will pass in time.

Federally, the maximum political contribution is $1,525 to each party, plus another $1,525 in total to all the registered associations and candidates of each party.

They can also donate $6,650 to candidates of any one party in a campaign, but no more than $1,330 to a single candidate.

“As we transition away from corporate and union donations and move to more of the system that the federal government has in place, the kinds of fundraising events will change, the kinds of initiatives will change, but I can’t tell you the specifics of all that,” Wynne said.

The premier has refused to confirm that her ministers have fundraising targets, but according to her energy minister, they are all fulfilling their obligations to pad the party coffers.

“I’m not aware of any minister who hasn’t met their allotment,” Bob Chiarelli said Wednesday on his way into a cabinet meeting.

But both he and Finance Minister Charles Sousa denied there is any quid pro quo for big donors. They were responding to a Globe and Mail report that one of the banks that acted as an underwriter for the Hydro One IPO promoted a $7,500-per-person fundraiser for the two ministers.

Earlier this month, Wynne defended such fundraising, denying that a $6,000-a-head dinner co-sponsored with a high-powered lobbying firm amounted to selling access to herself and her cabinet ministers.

Sousa said he has not paid much attention to the optics of those fundraisers.

“It’s not something I have been concerned about,” he said. “I make myself accessible to all stakeholders.”

Wynne used her Heritage Dinner speech to the “room full of Ontario thought leaders” to tout her government’s major policies, such as a new grant program to make average post-secondary tuition free for low-income students, the privatization of Hydro One and cap-and-trade.