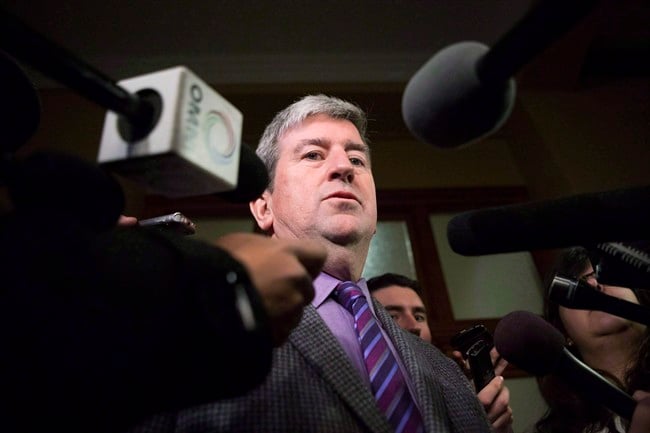 Glen Murray talks to media at Queens Park in Toronto on Thursday, December 12 2013.Murray insists the province won’t eliminate natural gas for home heating as part of an ambitious plan to fight climate change that will soon be released. (Chris Young/CP)

Glen Murray refused to confirm or deny a Globe and Mail report saying the province would spend $7 billion over four years to reduce its carbon footprint, partly by phasing out natural gas and greatly increasing the number of electric vehicles on the road.

“Within the next couple of weeks you’ll see the entire action plan, supporting documents will be properly released,” Murray told reporters.

The Globe said it obtained a copy of the Climate Change Action Plan that calls on the province to phase out natural gas for heating, which is currently used in 76 per cent of Ontario homes.

It said the government would spend $3.8 billion on grants, rebates and subsidies to retrofit buildings and move them off natural gas and onto geothermal, solar or other forms of energy. The plan would require that all new homes built in Ontario in 2030 or later be heated without the use of fossil fuels.

But this year’s budget committed the government to extending natural gas to rural Ontario, and Murray insisted it would still be an option for home heating.

“Natural gas will continue to play a critical role in the energy mix in Ontario in the future, and beyond that you’ll have to wait to see the details,” he said.

“But no, we’re not banning natural gas or taking it away from people.”

Union Gas and Enbridge Gas, the two largest suppliers of natural gas in Ontario, expressed concern the province is considering phasing out natural gas for heating.

“To mandate natural gas out of existence will be very disruptive and expensive for consumers, and the other side of that is moving to an energy system with only one source and no diversification is risky.”

Enbridge warned phasing out natural gas for heating would be expensive.

“Converting a home from natural gas to electricity would cost about $4,500, and the heating costs would triple, increasing by roughly $2,000 each year,” Enbridge said in a release.

Richard Carlson, a senior energy policy associate at Mowat Energy, funded by Enbridge Gas, Union Gas, the Independent Electricity System Operator and Toronto Hydro as part of the Mowat Centre think tank, said having one government agency in charge of the climate change plan would be beneficial.

“So the Ontario Energy Board is looking to expand the gas grid while the draft (climate change) plan says something different,” he said.

Murray dismissed suggestions there would be uncertainty in the province’s industrial sectors until details of the climate change action plan are released.

“They have been working with us, the nine large emitting industries, in drafting this plan, so they had a major input into it and they do have a pretty good understanding of what’s coming,” he said.

The Globe said the Liberal plan sets a target of having 12 per cent of all new vehicle sales be electric cars and trucks by 2025, or about 1.7 million vehicles. There are currently only about 5,800 electric vehicles in Ontario.

The Canadian Vehicle Manufacturers’ Association said forcing people to switch to electric cars is not the way to go.

“The infrastructure has to be in place. The recharging infrastructure must lead the introduction of vehicles, so that consumers have that confidence.”

The Progressive Conservatives said the climate change plan represents a “crushing shift” for Ontario’s $16-billion auto industry, and warned it would cost jobs.

The province already provides rebates up to $14,000 for every electric vehicle purchased under $75,000, and up to $3,000 for ones priced between $75,000 and $150,000. The government recently announced it will spend $20 million to build nearly 500 electric vehicle charging stations across the province next year.

The $7 billion the Liberals plan to spend to on climate change would come from the estimated $1.9 billion they expect to generate each year from a cap-and-trade plan that would see companies buy and trade pollution emission allowances.

The government admits its cap-and-trade plan would add about four cents a litre to the price of gasoline, but insisted it would result in lower home heating bills.

Ontario plans to join existing cap-and-trade markets in Quebec and California. Manitoba has also signed on to join in the plan with Ontario and Quebec, but will limit it to 20 large polluters in the province.